Veterans Village at Perry Point: A Home for Veterans Near the Support They Need 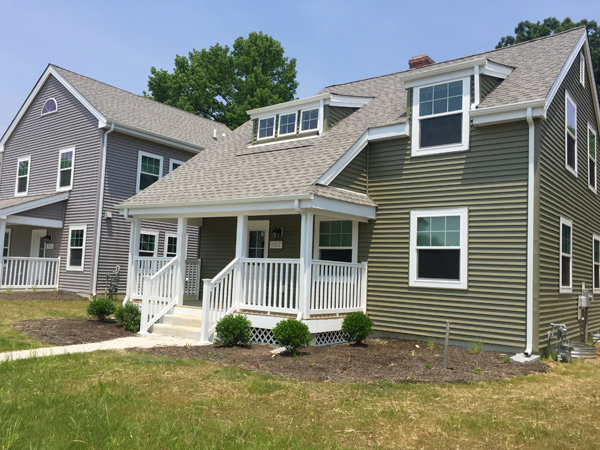 The homes at the Veterans Village at Perry Point provide formerly homeless veterans with a safe and affordable place to live in a community with people who have similar life experiences. Credit: HELP USA

During World War I, the U.S. Army opened a munitions plant at the northern tip of the Chesapeake Bay in Perry Point, Maryland, a rural community approximately 50 miles northeast of Baltimore. Since that time, the facility has undergone several uses; today, it provides health care to local veterans as a U.S. Department of Veterans Affairs (VA) Medical Center. On the grounds of the medical center are numerous homes that were first built in 1918 to house workers at the munitions plant. Nonprofit developer HELP USA renovated 42 of those homes in 2018 as a 75-unit supportive housing complex for veterans called Veterans Village at Perry Point. Through the HUD-VA Supportive Housing (HUD-VASH) program, veterans who live at the development receive housing vouchers for their apartments as well as VA case management. Because the project was built on land leased from the VA through their Enhanced-Use Lease (EUL) program, the VA’s services are within easy reach of the veterans who live there.

Although the developer had hoped to rehabilitate all the original structures, many of the units intended for conversion to duplexes had dilapidated to the point that they required total replacement. Because the homes were part of the Perry Point Historic District, however, any new construction needed to be nearly indistinguishable from the legacy structures to preserve the character of the historic district and win approval from the Maryland Historical Trust. David Cleghorn, the chief housing officer of HELP USA, the project’s developer, reported that the only visible difference between the duplexes and the single-family units is the shade of gray the buildings are painted. 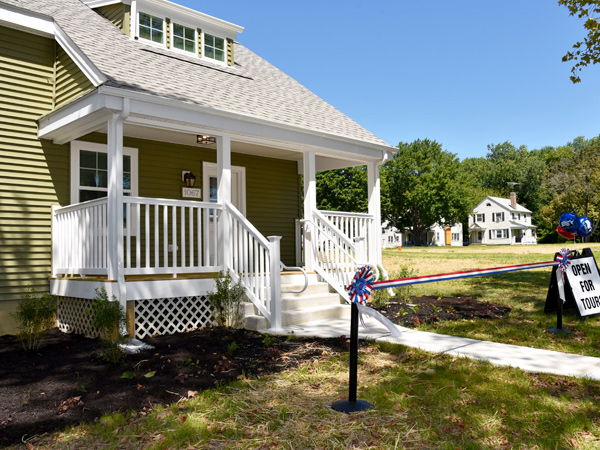 All of the homes at Perry Point leased up within one year of the project opening. Credit: HELP USA

Residents of Veterans Village at Perry Point must all be eligible to receive HUD-VASH vouchers. HUD-VASH is a collaboration between the VA and HUD that combines housing choice vouchers with VA case management services. To qualify for the program, a potential recipient must be a veteran who is currently experiencing homelessness or on the verge of homelessness and is receiving VA case management. Since the program’s beginning in 2008, 97,000 vouchers have been awarded, and in 2018, 10,000 families were receiving HUD-VASH housing vouchers.

The program awards vouchers to communities that have VA facilities to serve veterans in need and/or a high concentration of homeless veterans. Perry Point did not have a large population of homeless veterans. However, Paul Macpherson, director of the VA Investment and Enterprise Development Service, which administers EUL program, explained that the unusually large amount of underutilized land at the Perry Point VA Medical Center campus offered an opportunity to build new permanent supportive housing for veterans experiencing homeless or at risk of homelessness; the proximity of the medical center would allow residents easy access to the care they needed. In addition, Macpherson said, the site’s significant connectivity to Baltimore made it appealing enough to attract residents in need from across the Mid-Atlantic region. The site is directly adjacent to the Perryville train station, which is served by both the Maryland Area Regional Commuter Rail system and Amtrak, and the VA operates a shuttle bus that takes people from the medical center to downtown Baltimore and back every day. These transportation options allow residents to visit friends and family in Baltimore and the surrounding region, and many residents who can work can commute from Perry Point to Baltimore.

A key benefit of the HUD-VASH program is that the formerly homeless veterans that it serves have access to the VA’s case management programs. According to Macpherson, some residents have struggled with mental health and substance abuse issues, and many have been homeless for a long time, which can complicate the transition back into housing. To help these residents, the VA provides one caseworker for every 25 people living at Veterans Village. These caseworkers create a personal treatment and support plan for each resident that includes elements such as receiving regular counseling and medical support, building the skills needed to maintain a home, or developing strategies to find and keep a job. Cleghorn reported that most residents are between 30 and 60 years old, and many of them are looking to return to work. Caseworkers help these residents develop professional skills; they also help eligible residents access long-term disability benefits.

HUD-VASH vouchers fund the services that residents of Veterans Village at Perry Point receive from the VA, and the development’s location on the site of a VA Medical Center makes accessing those services easy for residents. HELP USA was able to build the Village on government-owned land because they signed an EUL with the VA. The VA created the EUL program in 1991 to transform underutilized land in the VA’s portfolio into housing and supportive services for veterans experiencing homelessness. An EUL functions as a long-term lease (up to 75 years) that a developer signs with the VA to allow them to build housing or supportive services on land that the VA owns. To date, 101 EULs have been signed, and the program has created more than 3,100 units of supportive housing for formerly homeless veterans nationwide. 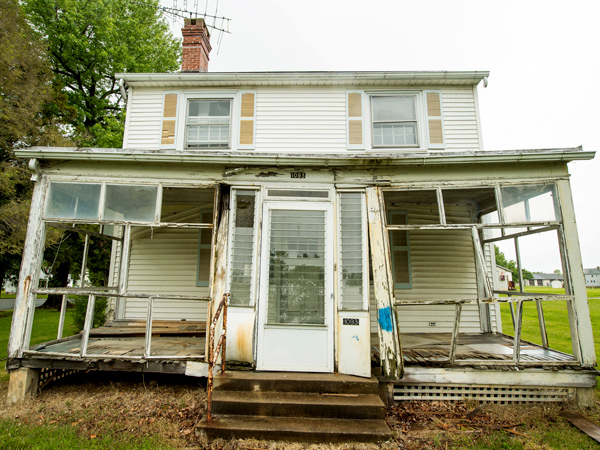 Prior to renovation, the homes that became the Veterans Village at Perry Point had fallen into disrepair after decades of vacancy. Credit: HELP USA

The VA issued the first request for proposals for an EUL at Perry Point in 2009. The town’s government, however, was hesitant to embark on such a large project. According to Macpherson, officials worried about whether their small community could manage the large number of formerly homeless veterans that the development would bring. Although local approval was not required to construct the project because the site was on government-owned land, the vouchers and tax credits to fund the project needed to be managed by a local housing agency, and the project stalled because no agency wanted to manage it.

In 2014, however, Delegate Kevin Hornberger was elected to the Maryland Assembly for the area surrounding Perry Point. According to Cleghorn, Hornberger was instrumental in building the support needed to complete the project. Hornberger’s mother worked at the Perry Point VA Medical Center, and his father was a maintenance engineer for the village; he was raised in the houses at Perry Point before they fell into disrepair. With Hornberger’s leadership, the state of Maryland’s Department of Housing and Community Development (MHCD) stepped in to serve as the housing agency for the project, making the project viable again. Macpherson recalled that although it is uncommon for a state agency to serve as a housing agency, state law permits such an arrangement in Maryland.

After securing the land and vouchers, the next major challenge in developing Veterans Village at Perry Point was funding its construction. Cleghorn recounted that because the process of selling the 4 percent low-income housing tax credits (LIHTCs) to fund the project in rural Cecil County was slow and difficult, the developers faced a significant shortfall in the capital they needed to fund the project. MHCD then discovered that funding was available to support projects with net-zero emissions. At the 11th hour, HELP USA and the VA struck a deal with the local utility company to place a large field of solar panels on the grounds, which helped the development qualify as a net-zero emissions project and freed up the remaining $1.4 million needed to complete the project.

HELP USA used a combination of $6.6 million in private debt that must be serviced immediately, $6.2 million in 4 percent LIHTCs, and slightly less than $500,000 in solar credits. In addition to these debts and credits, the project used approximately $11 million in soft loans, which either are paid with cash flow above the original debt service or accrue to be paid later. This funding included nearly $3 million from the VA for soil remediation, $2.7 million from the National Housing Trust Fund, $2.1 million from MHCD’s Rental Housing Fund, and several smaller sources. All told, the project cost $23 million.

Macpherson said that residents have enjoyed living at Perry Point since it opened last year. All 75 units are currently occupied and were leased up within the first year of opening, an indication of the strong demand for these apartments. HELP USA hopes to build on the early success of the Veterans Village at Perry Point and is exploring a second EUL project to rehabilitate the remaining homes on the site, which would bring the total number of units for veterans to approximately 150.