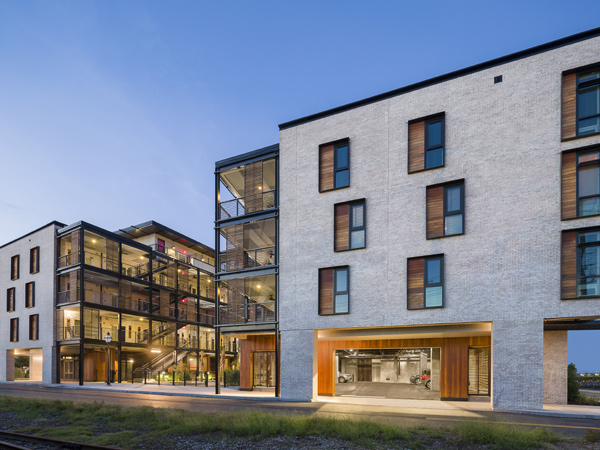 Charleston, South Carolina, is noted for its unique and well-preserved architectural heritage, a legacy that continues to inspire contemporary design in the city. At Williams Terrace, lead design firm David Baker Architects (DBA) reinterprets elements from Charleston’s historic vernacular architecture to provide affordable housing supporting vibrant independent living for local seniors. Built on a former public housing site devastated decades ago by a hurricane, Williams Terrace, owned by the Housing Authority of the City of Charleston (CHA), provides affordable housing for low-income seniors that is within walking distance of the city’s rich downtown amenities. For its work on Williams Terrace, DBA received the

Opened in 2017, Williams Terrace consists of 41 one-bedroom units, each approximately 500 square feet, arranged in a five-story, U-shaped building. Eligible tenants of Williams Terrace must be aged 62 or older. Development costs totaled slightly more than $12 million and were met through a $7 million loan from Bank of America and $5 million from the cash reserves of the Housing Finance Agency, a component fund of CHA with a mandate to create housing opportunities for low- and moderate-income citizens. Amenities include a rooftop community room and terrace as well as a large common room on the ground level capable of hosting events. 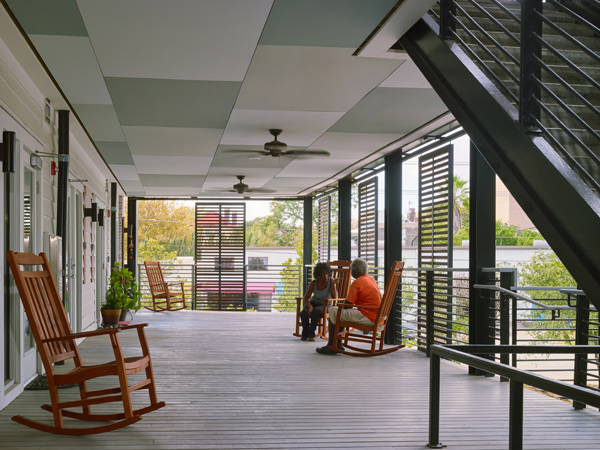 The deep porches that surround the courtyard of the U-shaped building serve both as a means of circulation and as a kind of front porch, where neighbors can socialize. The design was inspired by a traditional style unique to the city, the Charleston Single House. Credit: Chris Luker

Although the overriding aesthetic of Williams Terrace is modern, certain design features derive from Charleston’s traditional building typology. Each apartment is long and narrow, evoking the design of the Charleston single house, so named for a floorplan that is a single room wide and several rooms long. At Williams Terrace, each apartment occupies the entire depth of the building. This layout means that both the front and back of every apartment face an exterior wall, allowing cross-ventilation. In the traditional Charleston single house, the long, narrow floorplan pushed the living space to one side of the lot, leaving room for a covered porch that ran the length of the building and extended into the side yard. Called “piazzas,” these porches served an important environmental function in an age before air conditioning, shielding the ground floor from the sun while helping to capture and direct breezes into the home’s interior. At Williams Terrace, the inner courtyard is defined by similarly deep porches that offer space for air to circulate and give each resident a semiprivate area in front of their apartments to sit and interact with neighbors. Although these porches do not meet the classic definition of a Charleston piazza, which would demand that the piazzas be private rather than semipublic spaces, the formal linkages derive from the architects’ studies of local design traditions.

Fundamentally, piazzas were an architectural response to the problem of living in a hot and humid climate. Similarly, Williams Terrace is adapted to its own environmental context. Built on a floodplain where Hurricane Hugo had rendered an existing public housing development uninhabitable in 1989, Williams Terrace, per Charleston’s building code, has no permanent use at the ground level. To minimize sheer forces on the building from floodwaters, the city’s building code mandates that any walls at ground level readily and cleanly break away under pressure. As a result, the building’s communal spaces and mechanical systems were forced to the roof, with the ground floor serving as a flexible space that can accommodate periodic events for residents. 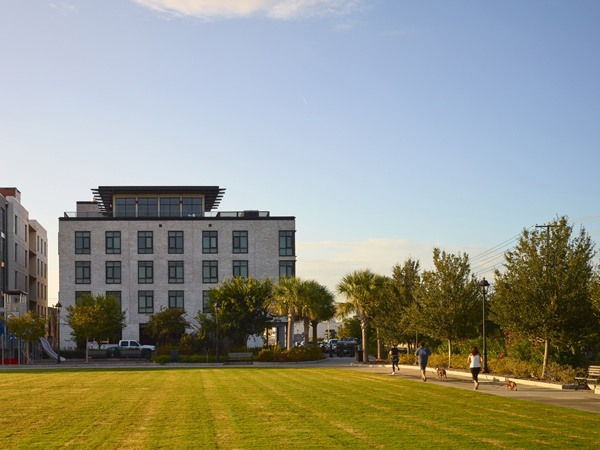 Williams Terrace sits on the site of a former public housing project that had been devastated by hurricane Hugo in 1989. Located within walking distance to the amenity-rich historic downtown, Williams Terrace, along with the adjacent Gadsdenboro Park, is helping the redevelopment of its neighborhood. Credit: Chris Luker

According to Daniel Simons, principal at DBA and one of the architects who worked on Williams Terrace, an ethos of community building sat at the heart of the design philosophy for future building residents and current Charleston citizens. Within the building, the large porches foster the social lives of residents, protecting against the isolation that seniors can face as they age. During project development, DBA consulted residents of other CHA properties as well as representatives from the city’s historical preservation community. From this engagement, whitewashed limestone emerged as the choice material for the building’s exterior, which helps relate the still-developing neighborhood to its historic urban context. Despite the newness of the immediate surroundings, including the recently completed Gadsdenboro Park across the street from Williams Terrace, residents have easy, walkable access to the historic downtown of the Charleston peninsula.

Williams Terrace demonstrates the role that the conscientious and sensitive design of affordable housing developments can have in enhancing the lives of residents and the character of neighborhoods. Attention to place-specific precedent can put modern buildings into dialog with historic surroundings while inspiring new, socially beneficial uses of time-honored architectural features.