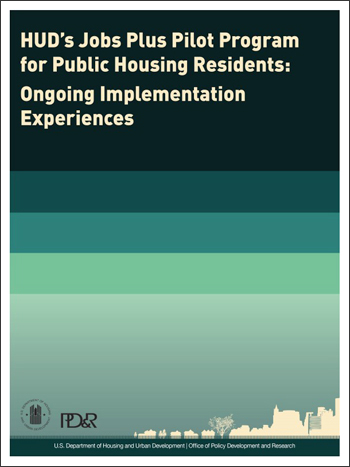 A new research report sponsored by HUD’s Office of Policy Development and Research explores the implementation of the Jobs Plus program. The program aims to improve employment participation and enhance earnings among public housing residents. It is informed by pilot programs that have been developed since the late 1990s. Beginning in 2015, the program has been funded with $76 million in grants. The new report details an evaluation of the program in eight of the nine public housing agencies (PHAs) that received the initial grants, and provides insight into successful program models.

In the late 1990s, with funding from a consortium of supporters, HUD partnered with MDRC and the Rockefeller Foundation to develop Jobs Plus, which was designed to help public housing residents overcome the major impediments to achieving economic self-sufficiency, including poor employment histories, limited education, and significant personal challenges. Since its inception, the Jobs Plus program has centered on three mutually reinforcing core components: employment-related services and activities such as job search assistance, education programs, and vocational training; rent incentives that allow families to increase their income without triggering an increase in their monthly housing payments; and community support for work, which includes creating an environment in which residents can support each other in reaching their employment goals. MDRC’s evaluation of the initial program demonstration found a 16 percent increase in earned income among the sites that fully implemented the model.

Since 2015, HUD has awarded grants to 35 PHAs to operate Jobs Plus. The 4-year grants provide the resources to implement the program and develop local strategies to increase employment and improve economic self-sufficiency. The HUD report evaluated eight participating PHAs: Boston; Charlotte, North Carolina; Chicago; Cuyahoga, Ohio; Memphis, Tennessee; Roanoke, Virginia; St. Louis; and Syracuse, New York. This report, following a previously published interim report, examines how the program’s operation has evolved over time, the implementation challenges that remain and the strategies that agencies have adopted to address them, rates of resident participation, and the technical assistance and guidance that the sites received.

This study covered the implementation from April 2015, when the grants were first awarded, to early 2018, when PHAs were developing their sustainability plans. The study evaluated the program based on the three mutually reinforcing program components.

The report describes how the first program component, employment services, was administered. By the end of the second year of the grant, approximately 61 percent of work-able residents had enrolled in Jobs Plus and completed an employment assessment, although participation rates varied widely across the eight sites. For example, 92 percent of work-able residents in Chicago participated compared with 25 percent in Boston. At all sites, engagement with employment services was largely resident driven; the program had no requirements for how often, or how, residents should engage with case managers. Across the program sites, efforts by dedicated job development staff to build relationships with employers proved to be a successful strategy for job placement. Relationships with local workforce development agencies, however, were less successful; among other reasons, the basic proficiency standards that many workforce development agencies require were participation barriers for PHA residents.

The second key component of Jobs Plus is the Jobs Plus Earned Income Disregard (JPEID), which provides incentives for employment by capping the amount of earned income included in a tenant’s rent calculation. Following enrollment in JPEID, increases in earned wages do not increase the tenant’s contribution toward the rent. The percentage of work-able households with earnings disregarded through JPEID varied across the program sites. For example, in the third quarter of 2017, the percentage of residents with disregarded income varied from 6 percent to 40 percent across the eight program sites. Charlotte, Memphis, Roanoke, and Syracuse had the largest proportion of residents benefiting from JPEID, with each having at least one-third of their public housing residents participating. On average, JPEID participants had $292 in rent disregarded each month because of the program.

The third key component of Jobs Plus is Community Support for Work, which aims to have as many residents of a community as possible engaged in meaningful work and to develop an environment of mutual support and widely shared employment expectations and aspirations. Sites have employed a variety of strategies to help meet these goals including community events, network building, and community coaches.

The study used the second year of implementation to estimate program costs. The overall cost of the program at all sites ranged from $2,291 to $3,800 per resident. The costs that Jobs Plus paid ranged from $1,310 to $2,954 per resident. At most sites, the HUD grant covered more than half of the program’s costs, with local program sites leveraging additional resources to support the program. These additional resources included funds from other PHA programs in addition to private resources through organizations that provided programmatic support. Approximately one-quarter of program costs involved employment-related services, and one-third of costs were related to disregarded income through JPEID.

The evaluation included recommendations for the program across the three program components. The evaluation suggested strengthening employment services by targeting the unemployed and underemployed, formalizing case management services, and focusing on employment advancement and professional development among the employed. The researchers also recommended a continued effort to build relationships with local employers and meaningful collaborations with local workforce development agencies.

The researchers recommended that HUD allow PHAs greater flexibility to enroll participants in JPEID, which would make the program more efficient and allow residents to participate seamlessly. The researchers also suggested that the program administrators prepare residents for the end of the JPEID benefit and the resulting rent increase.

Overall, despite the complexity of Jobs Plus, the evaluation indicated that the program can be successfully scaled up to support economic empowerment and greater self-sufficiency for PHA residents nationwide.