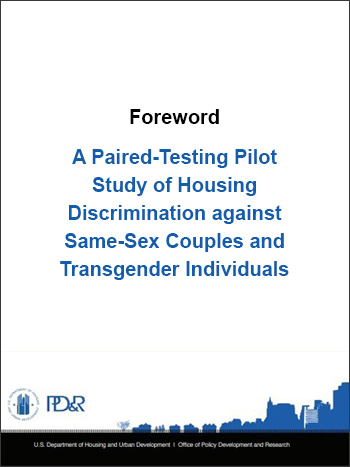 The overall sampling design involved 2,000 paired tests, of which 1,800 were same sex and 200 were transgender. Researchers considered state- and local-level protective laws and racial and ethnic diversity in the 10 largest metropolitan statistical areas (MSAs) when choosing sites. Sites required sufficient populations of minority (including African-American, Hispanic, and Asian populations) and white individuals so that researchers could conduct paired testing separately for the two groups. Based on these considerations, researchers targeted 1,800 same-sex tests for the Dallas-Fort Worth and Los Angeles MSAs and 200 paired transgender tests for the Washington, DC MSA.

Of the 1,800 same-sex paired tests, 1,200 were conducted in person and 600 were conducted remotely (by telephone or e-mail). Both the in-person and remote tests were split evenly between paired tests with lesbian and gay male couples. In-person tests were further allocated equally to white and minority testers. Minority tests were paired tests with a mix of African-American, Hispanic, and Asian participants. The 600 remote tests were also split relatively evenly between white and minority testers, although the minority group did not include Asian testers due to lack of availability.

In developing protocols for the same-sex paired tests, researchers decided that no tester would be assigned a single-person profile; instead, the testers were assigned a same-sex relationship that served as a proxy for sexual orientation. Testers used a mix of terms to disclose their sexual orientation to housing providers in as natural a way as possible before discussing available rental units. In half the tests, individuals posed as being married and referenced their spouse as husband or wife, as appropriate. For the other half, individuals posed as unmarried but referenced their significant other as girlfriend, boyfriend, or partner.

Researchers performed regression analysis to determine if treatment of the focal testers varied with the characteristics of the test, testers, rental agents, and MSA. Researchers specifically tested for the following:

Researchers found that housing providers discriminated against gay men and transgender individuals on some treatment measures. Compared with heterosexual men, gay men were told about one fewer available rental unit for every 4.2 tests and were quoted average annual rental costs that were $272 higher. Providers told transgender testers about fewer units than they told cisgender testers, although providers quoted the same rent and average net yearly costs for both groups. Researchers found that differences in results by protocol were small and inconsistent across variables. As a result, they did not recommend one approach over the other.

Housing providers treated lesbians and heterosexual women similarly. Providers were equally likely to schedule an appointment, tell about and show the same number of units, and quote the same rent and incentives for both groups of testers. Although the researchers found small differences across treatment measures of availability and inspections that placed lesbians at a consistent disadvantage, these differences were not large or statistically significant.

The researchers found that the treatment of lesbian and gay couples varied little by race or city, results that they characterized as “unexpected.” The researchers suggested, however, that the results might not be accurate due to data shortcomings. The researchers found little difference in outcomes between the in-person and remote testing approaches. Nevertheless, they hesitated to recommend relying on remote testing methods, because in-person testing ensures that testers interact with the staffers who make rental decisions.

Compared with earlier studies of housing discrimination based on sexual orientation and gender identity, the extent of discrimination suggested by the current study is more modest. However, as the researchers noted, the results are not directly comparable due to various factors, including study scale, choice of study sites, and methodological differences. Study outcomes may have been skewed by restricting tests to only three metropolitan areas that had ordinances barring discrimination based on sexual orientation and gender identity. Conducting tests in a larger and more diverse set of metropolitan areas might have produced different results. The researchers also noted that because the number of transgender tests was small, the study cannot support an analysis of differences in treatment of transgender women, transgender men, and genderqueer individuals. Moreover, because of the general methodology employed in paired testing for the rental market, this study’s findings are limited to only the initial stages of inquiry about rental units and to individuals who are financially qualified for the requested housing.

Because of the limitations of the present study as well as the number of questions that it raised, the researchers suggested several areas that merited further inquiry and activity. Among them is testing with a larger sample of sites and with sites that vary by region and population size. Another is additional research into best practices for paired-testing studies of housing discrimination based on gender identity. A third is designing study protocols in which testers pose as single homosexual individuals, permitting a direct test for sexual orientation discrimination rather than testing by proxy. A final area is greater knowledge sharing among researchers studying housing discrimination based on gender identity and sexual orientation.