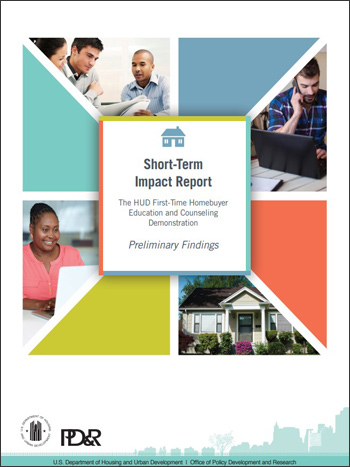 For many homeowners, the path to homeownership begins with education about the homebuying process and the responsibilities of homeownership. This education comes in many forms, from self-directed research to the pre-purchase education and counseling that is often required to participate in a downpayment assistance or subsidized mortgage program. HUD has long sought to better understand the effect of prepurchase counseling and education on homebuyers, and although many recent studies have shown positive or neutral effects of counseling on budgeting, use of credit, mortgage delinquency, and foreclosure, none of this research includes a large-scale, randomized controlled experiment with long-term followup.

In 2013–2014, researchers began enrolling participants in the First-Time Homebuyer Education and Counseling Demonstration, a randomized experiment sponsored by HUD’s Office of Policy Development and Research to shed new light on the use and effectiveness of first-time homebuyer education. The diverse sample includes over 5,800 low-, moderate-, and middle-income prospective homebuyers in 28 metropolitan areas. Short-Term Impact Report: The HUD First-Time Homebuyer Education and Counseling Demonstration Preliminary Findings provides short-term findings from the research covering the first 12 to 18 months after the study’s random assignment period began. An earlier report from HUD on the study, released in October 2018, explored the characteristics of those who complete first-time homebuyer education and counseling and their motivations for participating.

The primary goal of the study is to determine the impacts of homebuyer education and counseling on low-, moderate-, and middle-income prospective first-time homebuyers.The study also examines how the mode of delivery of the counseling and education — in person or remote — affects the effectiveness of the interventions. The study examines impacts on a series of outcomes across three domains: preparedness and search, financial capability, and sustainable homeownership.

The study uses an experimental design to evaluate the effectiveness of counseling and education for homeowners. Because participants were randomly assigned to a control group or one of three treatment groups, differences in outcomes among these groups can be considered causal with respect to the intervention. The 5,800 first-time homebuyer participants were randomly assigned into either a control group whose members received no services or one of three treatment groups: one offering remote services, one offering in-person services, and one offering a choice of in-person or remote services. The study’s “intent-to-treat” impact measures the impact of the offer for services, including how often participants used services and the effectiveness of the services. The study’s “treatment-on-the-treated” impact evaluates the impact of receiving services, with the assumption that those who did not receive services experienced no impact. It is important to remember that study participants are not reflective of typical pre-purchase counseling clients since the study team recruited them through 3 national lenders and anyone who was required to receive homebuyer education or counseling for a particular mortgage product or downpayment assistance program was excluded from the study sample.

Overall, the report provides mixed evidence of the effect of homebuyer education and counseling on the outcomes observed in the 12- to 18-month period following the start of the study. The findings researchers considered to be positive include the following:

The findings the researchers considered to be neutral or unexpected include the following:

Although the researchers did not identify one service-delivery mode for first-time homebuyer education as being superior to the other, the treatment groups did experience some variation in effects. For example, those who received in-person services were more likely than members of the control group to express greater satisfaction with the homebuying process, achieve a higher score on the mortgage literacy quiz, and attain a credit score above 620. Those in the treatment group who were offered remote services were more confident about the homebuying process, were more sure of their ability to report credit-score inaccuracies, and were more willing to reach out to their lender or housing counseling agency during a time of financial distress than were those in the control group.

The report’s findings represent the first step toward providing experimental evidence on the effects of homebuyer education and counseling. Overall, the report includes both encouraging and unexpected results concerning the effects of housing counseling. It is important to remember that this report provides short-term findings that merit further investigation and should not be considered final indicators of the impact of housing counseling. Further insight into the impacts on sustainable homeownership will emerge in the study’s long-term impacts report, which will include results from the long-term follow-up survey, loan performance, and credit report data three and a half to six years after random assignment.