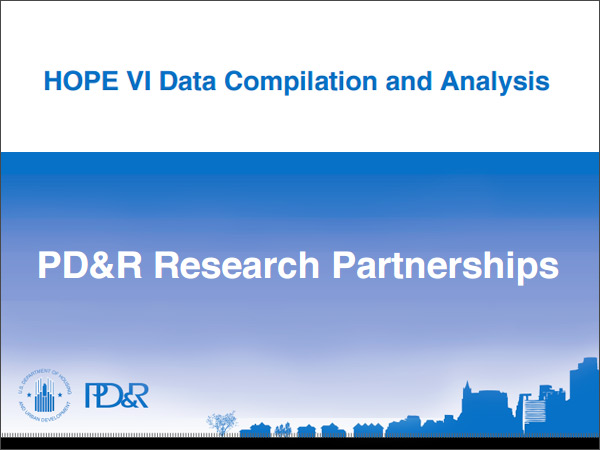 At the local level, developers and city governments use mixed-income housing as a strategy to deconcentrate poverty and rejuvenate neighborhoods. HUD implemented the HOPE VI program in the 1990s to follow through on its goal to support mixed-income housing. Unlike previous studies that examined a single HOPE VI site or group of sites, the recent 2016 HOPE VI Data Compilation and Analysis study examines the broader scope of mixed-income housing developed and financed through all 260 HOPE VI revitalization grants awarded from 1993 to 2011. Researchers conducted a comparative and descriptive analysis of Community and Supportive Services (CSS) reports and all 260 revitalization grantee reports of the construction, demolition, and relocation activities associated with the production of mixed-income housing units — an analysis that no prior research studies have completed.

The study examines the income and tenure mix of housing units that have been produced through the HOPE VI program, analyzes the return rate of original residents to the redeveloped properties, reviews the support residents received through the CSS component of HOPE VI, and evaluates HOPE VI financing and leveraging of public and private sources. Because previous studies examined only a single HOPE VI site or a small group of sites and did not account for the CSS component of the HOPE VI grants, this analysis fills a critical knowledge gap.

The research team used the following four categories to determine the income mix at each HOPE VI site:

Of the 260 grantees, 69.1 percent of the housing developments were for public housing and affordable units with a Narrow Low-Income mix. Broad Continuum sites made up 25.5 percent of grantees. Broad Continuum sites constructed more housing in total by increasing the number of units across a broader income spectrum. Polarized Bi-Modal sites made up 5 percent of grantees, and only one site fell into the All But The Poorest category.

Existing tenants needed to relocate during construction, and, depending on the size of the housing site and the work needed, the timelines for completing construction, relocation, and occupancy ranged from weeks to years. Researchers found that original tenants occupied only 20.7 percent of revitalized units. Original residents returned to 36.1 percent of the 55,318 public housing replacement units. Sites 12 years or older had higher return rates than did newer sites aged 11 years or less, at 33.8 percent and 21.1 percent, respectively.

A total of 73,065 residents received community and supportive services. The research team found that newer and larger sites with 319 units or more had a greater proportion of residents receiving CSS. The largest number of participants was enrolled in the following services: job training; childcare; transportation assistance; employment preparation, placement, and retention; and behavioral health counseling. All of these services exceeded their enrollment goals. Although English as a second language courses, substance abuse programs, and high school education programs had the lowest number of enrollees, these too exceeded their enrollment goals. Job training programs exceeded their completion goals, but high school or equivalent education fell short of its completion goal. Despite these gains in participation in CSS, the number of residents employed for 6 months or more — 1,397 — fell well short of the intended goal of 15,055 residents.

The different income and tenure mixes, funding, and types of community and supportive services offered, represent a range of strategies employed by HOPE VI grantees. The researchers offer comparative analysis across these categories for outcomes such as return rate. More extensive discussion of HOPE VI project characteristics by region and state and the variety of strategies pursued by grantees can be found in the full report.

Additionally, several lessons from HOPE VI can be applied to future social and housing policies, particularly the Choice Neighborhoods initiative, which replaced HOPE VI in 2010. Ending residential segregation and concentrated poverty while simultaneously increasing the number of available affordable housing units in socially and economically diverse neighborhoods has been an enduring challenge for current policy approaches. The researchers recommend devoting more resources to the relocation process, facilitating residents’ return to HOPE VI housing sites through phased relocation or relocating residents to sites close to the site under construction. Although HOPE VI grantees exceeded enrollment goals in CSS programs, these enrollments typically did not lead to long-term positive outcomes for participants. Thus, the research team suggests that more analysis is needed to specifically determine how CSS programs can be improved to meet residents’ long-term needs.

Because the current analysis focuses on the income mix in three categories (public, affordable, and market-rate housing), the researchers note that future studies should target the specific household incomes within each category to determine which households are benefiting most from the housing and which are lagging. The researchers recommend that future studies examine social cohesion within mixed-income developments to understand relations between residents, property management, and social spaces within the housing. The researchers suggest that expanding the focus of future studies to the neighborhood level could help policymakers understand how housing policies influence wider socioeconomic outcomes.