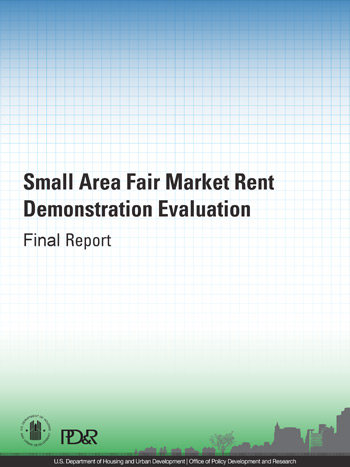 The Housing Choice Voucher (HCV) program is the largest rental assistance program that HUD administers, helping approximately 2.2 million households secure affordable housing in the private rental market. Through the program, participants can access housing in a variety of neighborhoods as long as the rent for the unit complies with an acceptable range of HUD’s fair market limit and the landlord will accept a housing voucher. Many households assisted through the HCV program, however, end up living in high-poverty neighborhoods with limited access to high-quality services and amenities because their voucher is insufficient to afford rents in higher-opportunity neighborhoods. This problem stems from the way the program is administered, with fair market rents (FMRs) calculated at the 40th percentile of the rent distribution by metropolitan area for regions across the country.

To understand the program’s effects, researchers examined PHA administration data from 2010 (before the demonstration) and at two periods after implementing the demonstration (2015 and 2017). They then compared these results with outcomes over the same period for PHAs that did not participate in the SAFMR demonstration.

The shift from metropolitan area-wide FMRs to SAFMRs changes the distribution of available units in various neighborhoods, possibly resulting in a net decrease or increase in the number of units within the SAFMR across a jurisdiction. For example, the City of Long Beach Housing Authority experienced a 10 percent decrease in the number of units available, whereas the City of Dallas Housing Authority experienced a 4 percent decrease. This is the result of the SAFMRs in some ZIP Codes being reduced, thereby reducing the number of units that can be rented through the HCV program. Across the seven PHAs being evaluated, the shift to SAFMR resulted in a net loss of 22,000 units that previously were within the FMRs established by the HCV program, underscoring the need to evaluate the impacts of SAFMRs across entire metropolitan areas.

Following the implementation of SAFMRs, voucher holders were more likely to live in higher-rent neighborhoods. The percentage of voucher holders residing in higher-rent neighborhoods increased from 17 percent before the demonstration to 22 percent after implementing the demonstration. The comparison PHAs did not experience any changes over the same period. Increased access to higher-rent neighborhoods translated into access to higher-opportunity neighborhoods, as measured by poverty rate, school proficiency, job proximity, and environmental quality. The research, shows that voucher holders were about 10 percent more likely to move to a neighborhood with a higher opportunity score as a result of the implementation of SAFMRs. This effect was particularly strong for households with children. In interviews, HCV holders in SAFMR PHAs who considered moving reported that a desire for a neighborhood providing greater opportunity, such as a good school district, was the primary factor in their decision on where to move.

Implementing the SAFMRs required investments in new information technology to calculate and administer payment standards and train staff in the SAFMR PHAs. Additional staff time was also required to administer contracts and inspect properties for their adherence to housing quality standards. Overall, PHAs reported that the additional staff time required to implement the SAFMR was justified by residents’ increased access to housing opportunities.