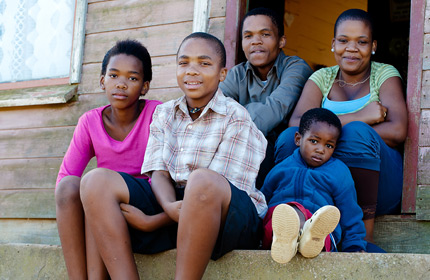 Rapid re-housing is an intervention to address homelessness that includes three core components: 1) housing identification, 2) move-in and short-term rental assistance, and 3) rapid re-housing case management and services. In 2009, HUD awarded grants to 23 communities to implement the Rapid Re-housing for Homeless Families Demonstration (RRHD) program. Researchers carried out a Congressionally-mandated evaluation of the demonstration program between 2011-2014. The basic research question underpinning the evaluation was whether rapid re-housing was an effective intervention for families with moderate barriers to housing stability, with effectiveness defined primarily as whether families avoid homelessness and maintain stable housing during the 12 months following program exit. The evaluation proceeded in two stages: the first stage of the study focused on the design and implementation of local RRHD programs, and the second stage of the study assessed the effectiveness of those programs in helping targeted families exit homelessness and maintain stable housing for twelve months after the conclusion of assistance. Two reports published in April 2016 and three briefs published in November 2014 present the results of the study. This article discusses their findings and recommendations.

Demonstration grants required that each local RRHD program have a uniform intake process to identify eligible families, as well as a standardized assessment tool to evaluate their appropriateness for the program. The grants specified that target families must be: literally homeless, have at least one child, have at least one moderate barrier to housing, and have the ability to independently sustain themselves in subsidized or unsubsidized housing upon conclusion of program participation. Local entities were responsible for determining for their own community what constituted “moderate barriers” to housing, as well as what would constitute a family’s ability to sustain themselves beyond the period of rapid re-housing assistance. Researchers surveyed each of the 23 RRHD programs through in-person site visits or telephone inquiries between February and May 2011 to document the following:

Researchers found that community context strongly influenced RRHD program design and client selection. At the time of program implementation, most programs had a decentralized assessment and intake structure. The programs differed substantially in how they defined a “moderate barrier” to housing as well as the ability to sustain one’s family independently at the conclusion of assistance. RRHD programs also differed in the number of families they could serve at one time, in the length and amount of rental assistance provided, and by the type of support services offered. All programs provided some type of housing search assistance or placement assistance, case management, and linkages with mainstream benefits. Most programs provided additional support services, including employment assistance.

The study’s second stage focused on whether the basic goal of the RRHD program — the maintenance of stable housing for 1 year after program exit by participating families — was met. Specifically, researchers sought to answer the following questions:

Researchers tracked the outcomes of two groups of families: the “evaluation cohort,” which consisted of 500 households that agreed to participate in the evaluation and for whom detailed household-level data was collected, and the “all families” analysis, which consists of a review of aggregate level HMIS data received on the vast majority (n=1,450) of RRHD program participants . Time did not allow for the collection of baseline data from families who enrolled in the evaluation, therefore, baseline data was constructed using the program-specific data elements within HMIS. Detailed telephone interviews were attempted with the 500 study households twelve months after the conclusion of assistance, but locating the households proved to be exceedingly difficult, and the survey closed with a 41% response rate. However, through the tracking efforts employed by the research team, address history data was available for a larger cohort of study households (n=380). For the “all families” analysis, aggregate data is available for return to shelter within twelve months only.

Analysis of the data from the 500 households in the evaluation cohort revealed that households with income of at least 30% of MFI were less likely to return to shelter compared to families with zero cash income, and non-Hispanic African American households were more than three times as likely to return to shelter than other families. However, these findings did not hold in the larger analysis of HMIS data from the all families group. For this larger cohort, features of the program design or the housing markets, namely the structure of the housing subsidy and the relative availability of rental housing in the community had the largest impact on the likelihood that a family would have a subsequent homeless episode.

Data on housing mobility was available only for the study cohort of 500 families. Only 24% of study families remained in the same unit in which they received RRH assistance twelve months after assistance ended. The remaining 76% had at least one move; no data is available to determine how many moves each household made and/or whether these moves could be categorized as positive or negative moves. Only three personal characteristics were associated with a higher likelihood of having moved (having a head of household under the age of 24, being African American, and not having a disabled family member). No program or market characteristics were statistically correlated with the likelihood of mobility.

Only a small amount of the evaluation cohort of 500 families experienced any income or employment gains between program entry, program exit, and 12 months following program exit.

Conclusions and Suggestions for Policymakers

The researchers conclude that in most housing markets, rapid re-housing is an effective means of helping families return to housed situations—usually housing they rent themselves—and most families assisted avoid returning to homelessness in the year that follows, regardless of their personal characteristics. However, the rapid re-housing programs implemented in demonstration sites did not appear to result in long-term housing stability, increased family income, or other positive family outcomes. To address the ongoing challenges that families in RRHD programs face, researchers suggested that policymakers consider expanding services such as job training assistance and referrals to more intensive support programs.

Researchers suggested that RRHD programs establish stronger followup protocols or additional followup services for younger participants based on their finding that age and the presence of three or more children were strongly associated with high housing mobility. They suggested that programs expand eligibility to a broader group of participants because differences in participants’ housing outcomes were not statistically correlated with many of the characteristics RRHD programs used to determine eligibility. Finally, the researchers note that the findings lend support to the importance of a community adopting a centralized intake structures as they were found to be more efficient at assessing and referring families to quickly resolve their homelessness episode.