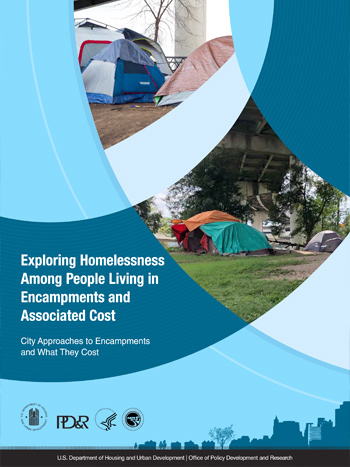 Encampments of people experiencing homelessness are an increasingly prevalent phenomenon, consistent with the overall national increase in unsheltered homelessness rates. To help understand the nature of encampments, responses to encampments, and how much those efforts cost, the U.S. Department of Housing and Urban Development’s Office of Policy Development and Research and the Office of the Assistant Secretary of Planning and Evaluation at the U.S. Department of Health and Human Services launched a joint study in 2019. In the study’s final report, “Exploring Homelessness Among People Living in Encampments and Associated Cost: City Approaches to Encampments and What They Cost,” researchers collected and analyzed data to broaden the understanding of encampments and summarize current strategies to address them and their associated costs. The research documented the ways in which communities are working to broaden the reach of their homeless systems by highlighting responses that guide encampment residents toward permanent housing solutions, including programs using the Housing First model, through outreach and other services.

The researchers analyzed data from a literature review, telephone interviews, and site visits to determine the common characteristics of encampments and their inhabitants. Conducted at the end of 2018, the review contains information from nine interviews with experts who described current research and the factors that cause encampment residents to congregate. The researchers conducted 39 telephone interviews across 9 cities to highlight the jurisdictions’ responses to encampments and the availability of cost data in each city. Factors such as geography, rates of unsheltered homelessness, and variance in housing affordability aided the selection of Tacoma, Washington; San Jose, California; Chicago; and Houston for the site visits. In these four cities, the site visits were crucial for gathering observational data, interviewing encampment residents, and collecting cost information.

During the site visits, researchers met with staff from cities and other local entities to inventory encampment responses and their associated costs. The study team used three approaches to analyze cost data. Acquiring budget data was the primary approach to determine encampment costs, which sometimes were estimated when budget data was available only for homelessness overall. All cost data was from fiscal year 2019 or, in the case that data was only available from a previous year, was extrapolated and estimated for FY 2019.

The report streamlines this methodology to a five-step approach that other policymakers and stakeholders who are addressing encampments can use in their cities. The steps are to define the scope of cost estimate, inventory the activities through observation or interviews, list the stakeholders, gather costs by engaging with and interviewing stakeholders, and finally analyze the cost data.

The Nature of Encampments and Their Residents

The rise in homelessness from 2016 to 2019 reflects the growing affordable housing crisis predominantly caused by rising rents along with a shortage of deeply affordable housing. Those experiencing homelessness can be categorized as sheltered or unsheltered, which encompasses those living in places unsuitable for habitation or not meant for human habitation. A subset of the unsheltered homeless population stays in encampments. Although no standard definition for encampments exists, the interviews revealed that cities consistently characterize encampments by the presence of temporary structures such as tents; the number of inhabitants, which can range from less than 15 people to 200 people; the presence of personal belongings; and the presence of a sense of social support or community. For some, encampments are appealing because of what they lack — namely, the rules typically associated with shelters such as curfews or limits on things like partners, pets, and possessions, offering insight on what factors residents may consider if choosing between a shelter or an encampment.

In interviews, encampment residents stated that autonomy, privacy, and sense of community are key motivators for choosing encampments. Shelters come with rules dictating when a person can enter for the night, which can conflict with a person’s schedule, such as working a night shift. Some believe that they can manage their needs without shelter support. Some residents consider others in the encampment, with whom they may have longstanding relationships, to be family members whom they can trust and depend on. At shelters, by contrast, couples or friends may be split up and situated next to strangers.

Responses to Encampments and Their Related Costs

Numerous concerns motivate cities to address encampments, such as residential and business complaints, health issues, and environmental issues. These complaints stem from the negative externalities of encampments, which include human waste, used needles, public health concerns, criminal activity, and pollution of sensitive bodies of water. The report suggests expanding shelter capacity in concert with increasing the ability of service providers to place people experiencing homelessness in permanent housing in alignment with a Housing First approach.

In these communities, when an encampment clearance is scheduled to take place, outreach workers notify residents and aid them in housing navigation by collecting identification documents and connecting residents with shelters or housing providers. Tacoma spent 4 percent of its encampment response budget on encampment clearance, whereas San Jose used about 57 percent of its budget to clear and close approximately 300 encampments. Chicago deviates slightly from the clearance and closure strategies found in the other four cities by successfully persuading rather than forcing some residents to leave — a strategy adopted because Illinois state law acknowledges the right of people to sleep on public property.

After clearing encampments, some cities spend funds on encampment prevention, in which city departments construct barriers to deter people experiencing homelessness from creating new encampments. Less obvious tactics include Tacoma’s “reclamation of public areas” strategy of trimming vegetation and adding lighting, which decreases the privacy that makes most encampment sites attractive to residents. The study also mentions that San Jose not only uses fences but also employs police to enforce regulations against camping.

Because some residents have histories of criminal activity, drug use, or mental illness, many people living in encampments could benefit from the creation of lower barrier shelters or navigation centers, which serve as temporary shelter until they find a permanent residence. The lowered barriers to entry for these centers, including a lack of sobriety requirements or early curfews, prioritizes the rapid transition of residents from homelessness to permanent housing. Tacoma calls these navigation centers “stability sites,” and they account for 60 percent of the city’s encampment expenditures.

Of the four cities, only Houston spent funds directly on permanent supportive housing (PSH) as an explicit part of its encampment response spending, which amounted to 23 percent of its total. The other cities changed or created policies that indirectly support encampment residents’ path to permanent housing through coordinated entry systems and an affordable housing action strategy. Chicago’s coordinated entry system saw an increase in the number of encampment residents transitioning to permanent housing after the city began restricting participation in its PSH program to applicants with a disability who have been unsheltered for more than 2 years.

The report provides U.S. policymakers and stakeholders with four cities’ current strategies to address encampments and the associated costs of each approach. The report acknowledges that more research is needed to discover whether these outreach strategies are effective; in particular, strategies to address substance use in encampments. The findings show that city governments are the largest sources of funding across the four sites, and, by identifying other funding sources, cities can allocate resources to permanent housing solutions that are currently undersupplied.