Initial Findings of the First-Time Homebuyer Education and Counseling Demonstration 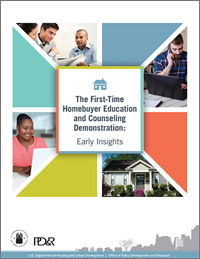 The demonstration focuses on low-, moderate-, and middle-income homebuyers and examines how homebuyer education and counseling affect outcomes in three domains: preparedness and search; financial literacy, capability, and management; and homeownership sustainability. Three major national lenders partnered with HUD and researchers to help screen and refer participants, who had to meet four requirements: live in one of 28 designated metropolitan areas; apply for preapproval, prequalification, or for a home loan; be first-time homebuyers, and have household incomes of less than 120 percent of the local area’s median income.

Between September 2013 and January 2016, the demonstration enrolled 5,854 homebuyers who completed a baseline survey at the time of their enrollment. A 12-month follow-up survey is still being conducted, and a 42-month follow-up survey will be completed if funded. Although the demonstration targeted those in the early stages of home purchasing, it enrolled individuals at every stage of the process.

In-person services were provided by one of 63 local HUD-approved housing counseling agencies. Remote services were provided by eHome America, which provided online education, and ClearPoint Credit Counseling Solutions, which provided telephone counseling sessions. All services were free of charge, followed National Industry Standards for Homeownership Education and Counseling, and had similar content. Both remote and in-person counseling and education services cover the basics of being ready to purchase a home; budgeting and credit; home finance, selection, and maintenance; and post-purchase finances.

The preliminary findings report is based on 12-month follow-up survey data of homebuyers who enrolled in the demonstration on or before December 1, 2014 (41% of all study participants), as well as information collected from 14 focus groups held in 4 cities. This early enrollee sample reveals that participants are racially and ethnically diverse and have a wide range of educational levels. The majority, 59.1 percent self-identify as Hispanic, African American, Asian, or another race, 40.9 percent self-identify as non-Hispanic white, and 54 percent, hold a bachelor’s degree or higher. Fifty-nine percent of participants are male, and 41 percent are female. Median income for participants and their co-borrowers over the 12 months before enrollment was $55,000, and 89.3 percent were employed full time.

Survey data also reveal that 48.9 percent of the early enrollees assigned to the treatment groups actually took up offered services. There were significant differences in take-up rates for the different counseling modes, with 65 percent of early enrollees assigned to the remote group initiated services, compared to 25 percent of those assigned to the in-person group initiating services. Those who did not initiate services cited scheduling conflicts as the main barrier. Enrollees who underwent homebuyer education and counseling believed that they gained important information that had a positive impact on their homebuying experience.

As part of evaluating the preliminary impact of being offered homebuyer education and counseling services, researchers tested four outcome measures: the number of correct answers (out of 4) to a mortgage literacy quiz, whether or not a respondent in financial difficulty would contact the lender for assistance before missing a mortgage payment, whether the respondent had a credit score greater than or equal to 620 (a proxy for qualifying for conventional mortgages), and whether the respondent had a budget and compared it often with actual spending. Because small sample sizes were small, researchers combined the mean outcomes of members of the three treatment groups and compared them with the mean outcomes of the control group members. Thus, the differences in mean outcomes between the treatment group and control group measure the impact of being offered any mode of treatment versus not being offered any mode of treatment.

For the budgeting outcome, no difference was observed between the treatment groups and the control group, a result researchers termed “surprising” because homebuyer education and counseling programs emphasize budgeting. The result is not so surprising when one considers that the early enrollee sample self-reported that they used a written budget before they enrolled in the study.

The most important take away is that HUD has successfully implemented a very rigorous, large-scale random assignment study of homebuyer education and counseling. Although there have been a numerous recent studies documenting the effectiveness of housing counseling, those studies do not have the scale, experimental design, elimination of selection bias, or long follow up that of this landmark study.

In terms of preliminary results, early enrollee outcomes suggest that offering individuals access to homebuyer education and counseling could help sustain homeownership in the long term. Three planned future reports will seek more definitive answers about the impact of housing counseling and education services. The first of these is a baseline report expected in late 2016 that describes the demonstration in detail as well as the characteristics of all study participants. An interim report to be published in early 2018 will examine the outcome and impact of education and counseling services on homeownership sustainability and personal financial health after 12 months, the relative effectiveness of services delivered in person compared with those delivered remotely, and the impact of services on various subgroups. A final report, if funded, will examine these same questions after 42 months and will serve as a basis for future policy decisions regarding homebuyer education and counseling.