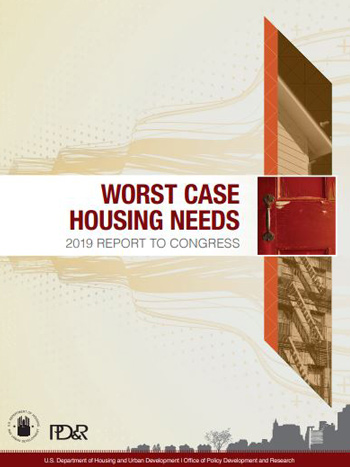 HUD’s Worst Case Housing Needs report, issued biennially since 1991, details critical problems facing low-income renting families. The 17th edition was published in June 2020 using information from the 2017 American Housing Survey (AHS), a joint project of HUD and the U.S. Census Bureau. The report defines very low-income (VLI) renter households — those with incomes at or below 50 percent of their area median income (AMI) — as having worst case housing needs if they receive no government housing assistance and pay more than half of their income toward rent, live in housing in severely inadequate physical condition (meaning that their units have one or more physical problems related to heating, plumbing, or electrical systems or maintenance), or both. The report finds that income growth contributed to a decrease in worst case needs between 2015 and 2017, but the demand for affordable rental housing continued to exceed supply by a substantial margin.

According to the new report, worst case housing needs decreased by 7.1 percent between 2015 and 2017. Among the 7.72 million households with worst case needs in 2017, severe rent burden was the most common problem, with 7.52 million households paying more than half of their income on rent. In part because of historical improvements in housing quality attributable to more stringent building codes, less than 3 percent of worst case needs stemmed from severely inadequate physical conditions.

Worst case needs peaked in 2011, reflecting residual effects of the Great Recession. The latest number represents some improvement since then, but remains higher than the years preceding the recession when there was greater availability of affordable housing.

Each year, rental assistance helps prevent millions of households from falling into worst case needs scenarios. Assistance programs were able to meet a greater share of the needs of a shrinking population of VLI renters between 2015 and 2017. Overall, about 29 percent of VLI renter households received rental assistance in 2017. Another 43 percent had worst case needs for assisted or other affordable housing and the remaining 29 percent avoided severe problems while unassisted on the private market. Extremely low-income (ELI) renters — those with incomes at or below 30 percent of AMI — were least likely to find adequate, affordable housing without public assistance. 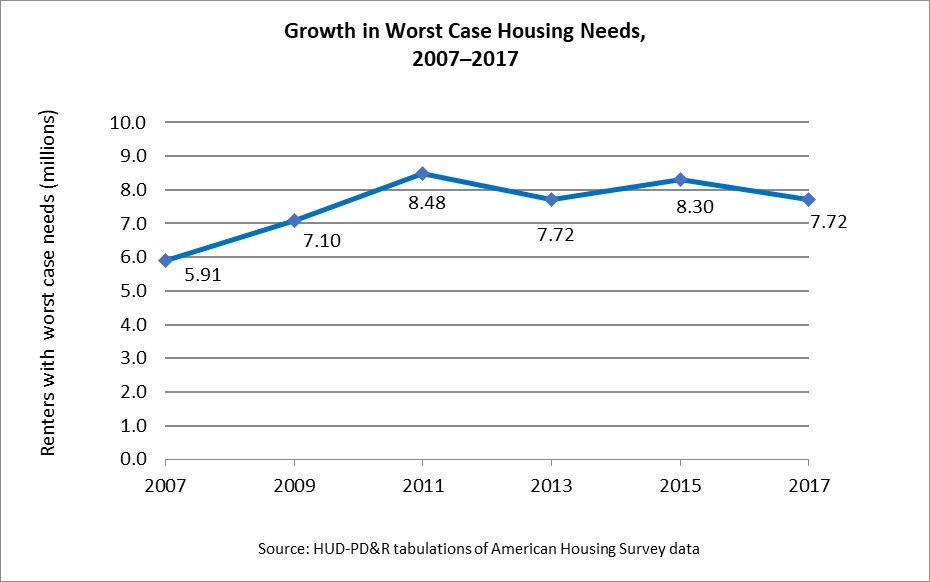 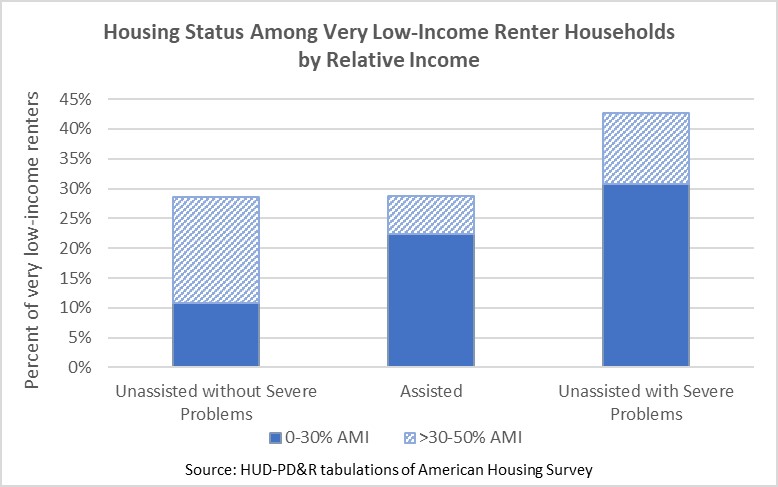 By household typology, families with children, at 33.3 percent, made up the largest percentage of households with worst case needs in 2017. Other household types, such as elderly, nonfamily (mostly single adults), and other family (without minor children) households, make up smaller shares of the total, with the number of elderly households rising as the baby boomer generation ages. “Other family” households, including married couples without children, parent(s) with adult children, siblings sharing a household, and families with an elderly person in the home, make up the smallest percentage of households with worst case needs.

Although the report showed an improvement in the number of renters with worst case needs, problems persist. The gap between the demand for affordable housing and the available supply is widening. In addition, even with public assistance, approximately 60 percent of ELI renter households and 40 percent of VLI renter households do not have access to affordable housing. Going forward, more remains to be done by both public and private stakeholders at all levels to spur economic and income growth, increase the availability of affordable housing, and provide rental assistance for families in need. To address these challenges, HUD supports reducing regulatory barriers to housing production, which is expected to both increase the number of affordable units for VLI households and make transitions to homeownership easier — both needed to increase the availability of affordable rental units. HUD’s Landlord Task Force is also working to improve access to voucher-eligible units among VLI renters, especially in higher-opportunity neighborhoods.