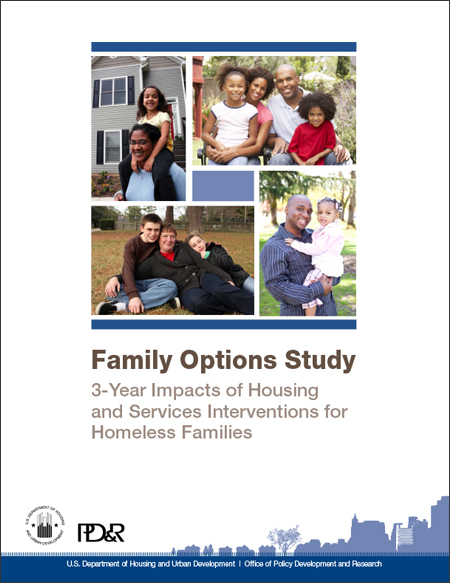 The study is designed as an experiment, in which families were randomly assigned to one of four possible interventions that differ in the duration of housing assistance provided and/or in the intensity of social services offered, including: 1) a long-term housing subsidy (SUB), which offers a long-term, deep housing subsidy, usually in the form of a housing choice voucher, with no specialized services; 2) community based rapid re-housing (CBRR), which is temporary rental assistance for up to 18 months with limited housing-related services; 3) project-based transitional housing (PBTH), which is temporary housing for up to 24 months in an agency-controlled building coupled with intensive supportive services; and 4) usual care (UC), which refers to the mix of housing and services that homeless families may access from shelter on their own without direct referral to one of the other interventions. Families were followed for three years following random assignment, with extensive surveys of families conducted at baseline and again approximately 20 and 37 months after random assignment.

The goal of the Family Options Study was to understand which housing and services interventions work best for families with children experiencing homelessness, and to learn whether or not certain types of families benefit more or less from different interventions. The fundamental research question guiding the analysis seeks to understand if priority access to a particular intervention yields differences in outcomes for homeless families over the short-term (roughly 20 months after random assignment) and/or the long-term (roughly 37 months after random assignment). While the primary outcome of interest was housing stability, and, in particular, preventing families from returning to homelessness, additional outcome domains of interest include family preservation, adult well-being, child well-being, and self-sufficiency. In addition to collecting data about the well-being of families and children at different points in time following random assignment, extensive cost data on each of the interventions studied was also collected, in order to calculate the fiscal costs of achieving the outcomes that were documented.

The findings at 37-months in large part mirror the findings documented at 20 months, with the long-terms outcomes again demonstrating the power of a long term housing subsidy to convey significantly improved housing outcomes to formerly homeless families. Families offered a subsidy experienced less than half as many episodes of subsequent homelessness, and vast improvements across a broad set of measures related to residential stability when compared to families offered any of the other interventions. In addition to improved housing outcomes, families offered a long-term subsidy continue to demonstrate significantly improved outcomes in non-housing domains, including adult well-being (reductions in psychological distress, intimate partner violence), child well-being (reductions in school mobility, behavior problems and sleep problems, and more pro-social behavior), as well as increased food security and decreased economic stress. Families offered community-based rapid re-housing or usual care have outcomes that are largely similar to the outcomes of the families assigned to usual care.

The findings from the Family Options Study provide powerful evidence on how we can end homelessness among families. Moreover, it also shows that by ending homelessness among families, there are substantial spillover benefits, such as dramatic reductions in a host of negative outcomes for children, families and communities, including homelessness and housing instability, intimate partner violence, psychological distress, economic stress, food insecurity, and school mobility—all of which are measures linked by research to have powerful effects on child well-being. The study also demonstrates that families who experience homelessness can successfully use and retain housing vouchers. The striking impacts of assignment to the subsidy intervention in reducing subsequent stays in shelter and places not meant for human habitation provide support for the view that, for most families, homelessness is a housing affordability problem that can be remedied with long-term housing subsidies without specialized services.