Changes in the National Housing Market: Indicators as of January 2020 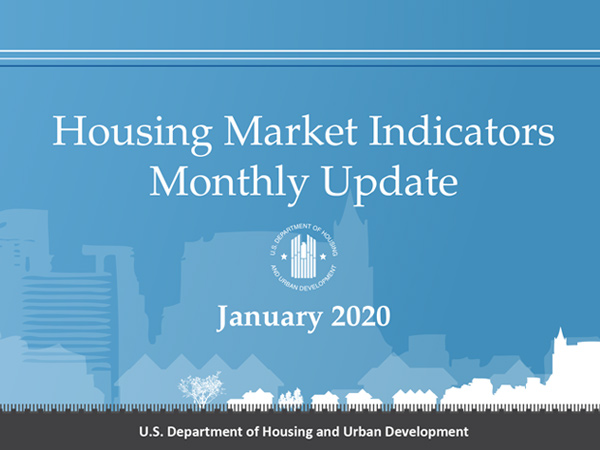 In this column, PD&R Senior Economist Carolyn Lynch answers questions about the January 2020 Housing Market Indicators report, which highlights key statistics and trends and describes the health of the nation’s housing market.

Does the latest report show any significant housing market changes in late 2019/early 2020?

The latest Housing Market Indicators (HMI) report shows that seasonally adjusted house-price increases have become more moderate, and mortgage interest rates are approaching all-time lows. Increases in homeowner equity, which is affected by house price changes, has also shown smaller gains recently. The construction of single-family and multifamily housing has been rising as the supply of existing homes on the market remains low. In addition, homeownership rates increased in the second half of 2019, while the affordability of renting a home continues to remain a challenge.

Why does the report include information on year over year as well as month to month changes?

Month-over-month changes in housing market indicators may signal the direction an indicator is taking, but they can also be volatile. Year-over-year changes often provide more of a perspective on the direction an indicator has taken. For example, sales of new single-family home sales fell slightly between November and December 2019, but these sales actually increased from December 2018. The HMI report includes charts, which give an excellent perspective on trends in housing market indicators.

Are there any seasonal trends that impacted the January 2020 housing market indicators?

Is there any geographic variation in the housing market trends as of January 2020?

Geographic variation by Census regions, states and metropolitan areas can be found in the source data for many of the housing market indicators. Geographic variation will differ by type of indicator. For example, in December, new home construction on single-family homes increased in the Midwest and South but decreased in the Northeast and West Census regions. In terms of new home sales, purchases rose in the Midwest and West but fell in the Northeast and South.

Why is it important to look at both the supply of new homes for sale and the inventory of existing homes on the market?

The sales market for housing has two components, sales of new homes reported by the U.S. Census Bureau and sales of previously owned (existing) homes reported by the National Association of Realtors®. It is important to look at both new and existing home sales to capture the entire market. Historically, existing homes sales have accounted for 85 percent of the market, but they currently make up about 90 percent of the market.

How can changes in the mortgage rate impact the housing market?

A decline in mortgage rates lowers the cost of financing a home and often has a positive impact on home sales. As the demand for home purchases increases over time, however, it often pushes up home prices which has a dampening effect on home sales.

How does HUD calculate the Rental Affordability Index?

The national homeownership rate reached a peak of 69.2 in 2004 but fell to a low of 62.9 in 2016 as a result of the Great Recession. Except for declining in the first half of 2019, the homeownership rate has generally increased since 2016, rising to 65.1 percent in the fourth quarter of 2019, which is very close to its historic norm of 65.2 percent. Many factors have affected the homeownership rate over this period, including the foreclosure crisis, unemployment and underemployment, slower growth in income relative to home prices, fluctuating mortgage rates, low inventories of homes for sale, and restrictive credit markets. Recent factors that are likely to have impacted the homeownership rate are the low unemployment rate, higher growth in income relative to home prices, and low mortgage rates.