In this column, Drew Zachary, Policy Advisor at the White House Domestic Policy Council, discusses the Opportunity Project, an open data effort to increase access to opportunity for all Americans. 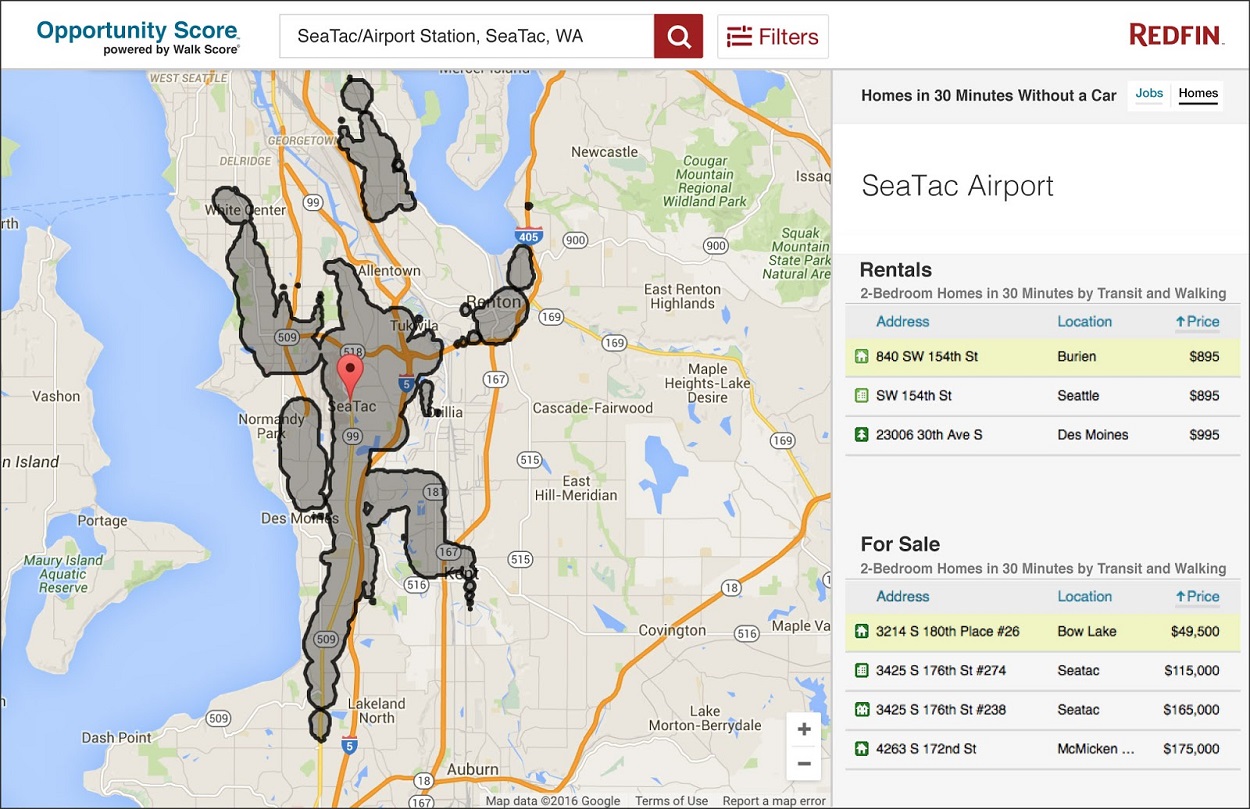 A map indicating affordable homes available within a 30-minute commute of a Seattle, Washington, workplace without a car, from Redfin's forthcoming Opportunity Score tool.

What is the Opportunity Project and who is involved in it?

The Opportunity Project is a new effort to expand access to opportunity for all Americans by leveraging the open data that federal and local governments have already made available, combined with the power of technology and cross-sector partnerships, to create tools that are useful for everyday Americans. The effort was led by the U.S. Census Bureau, the White House Domestic Policy Council, the Office of Science and Technology Policy, and the Office of Management and Budget Community Solutions Team. Two wonderful Presidential Innovation Fellows who were in embedded at Census led the charge and worked with Rob Renner from HUD's Office of Policy Development and Research.

A key component of the Project is that the federal partners also worked with local data stewards from eight U.S. cities, including New York City, Kansas City, New Orleans, Detroit, Philadelphia, San Francisco, Washington DC, and Baltimore. And, most importantly, we worked with 12 private and nonprofit developer teams. This effort would not have been possible without these developer teams, because these were the people who built the tools and provided the proof of concept to show how this project would work.

What are some examples of tools that people can use?

The developers built these initial tools over 6 weeks using local data and a large body of open federal data that had been newly curated to be more accessible, centralized, and easy to download and use. We gave the developers a few user scenarios, which are detailed backstories of problems that people are facing, and encouraged developers to design tools that responded to those needs. We found that the developers came up with very different and creative solutions that we found fell into a few categories.

The first category included tools that help people make household decisions such as finding affordable housing for their family, locating rental housing after experiencing homelessness, or finding a high-performing school for their kids. Those ideas were developed by teams including GreatSchools, Redfin, and PolicyMap.

A second category of tools focused on empowering community leaders and advocates who are working to bring more resources into their communities and need data at their fingertips to make the case for those resources. For example, in an area where leaders and community members are aware of the need for a new supermarket, these tools would give those individuals access to data to help them make that case. These kinds of tools came from organizations such as Community Commons, a nonprofit, and Azavea, a small for-profit company from Philadelphia.

The third category included tools designed to help people thinking at a higher level of geography, including local policymakers or affordable housing developers trying to determine what areas of cities to invest in or how to allocate resources. Those ideas came from organizations such as the diversitydatakids.org project at Brandeis University and Zillow.

An additional group of developers incorporated a large volume of the data into existing platforms, including ESRI, Socrata, National Equity Atlas, and Measure of America.

How did the project get started?

The idea sprung out of the White House Domestic Policy Council. It was inspired by the U.S. Department of Education’s College Scorecard and the idea that making public data available and accessible is a great first step, but it is not enough. Those data are even more powerful when you work with developers, data stewards, community leaders, and subject-matter experts to build digital tools that people can use to navigate that information.

Our thought was, if the U.S. Department of Education could create the College Scorecard, couldn't we do something similar with the Affirmatively Furthering Fair Housing (AFFH) Rule data that came out of HUD? It grew from there into something much bigger than we had originally envisioned, because we pulled in not just HUD data but also data from Census, the U.S. Department of Health and Human Services, the U.S. Department of Agriculture, other federal agencies, and eight different cities. The localities provided critical data points that are not available at the federal level, such as the location of high-crime areas and key resources such as supermarkets, daycare facilities, and health clinics. So when we pulled together data from all of those sources, the initiative ended up focusing on more than just affordable housing and access to resources to near affordable housing. Instead, the Opportunity Project became a broader effort to make data — any kind of data that provides information on access to opportunity — more accessible.

How do you envision individuals, families, and community leaders actually connecting with and using these tools?

We really see the value of this in the partnerships that will be developed. We had a launch event on March 7 at which we unveiled the platform for this initiative at opportunity.census.gov, the 12 participating developer teams released their digital tools, and we announced commitments from more than 30 additional organizations to expand use of these tools and create new ones. We encourage everyone to visit opportunity.census.gov, see the curated list of opportunity datasets and user scenarios, and test out different tools that have been created using this platform. There are also links to online communities where people are discussing the Opportunity Project and building connections on GitHub and Slack. But the White House event was just the launch of something much broader; we hope that different community organizations, nonprofits, and private-sector developer teams from across the country will get involved. Our role is to facilitate those connections and solve other problems, because again, it's not enough just to put data out into the world and hope people use it.

We're also going to be increasing our community engagement. We've had people from communities participating in federal programs such as Promise Zones come to the launch event learn about what we're doing and how it can benefit them. We are hoping that these people will assist the initiative by going back into their communities, identifying community needs, and working through this network and community of practice to build new tools or expand the use of the existing tools in ways that are useful to them.

How can people get involved with the design and development of the tools?

The first thing that I would say is go to opportunity.census.gov and check out all the resources that are available, test the tools, and see what data are included in the Opportunity Project inventory. You can also join us on GitHub and on a Slack channel that's already grown. We started the Slack channel with about 30 participants prior to the March 7 launch event spring, and we already have almost 500 users from across the country just from word-of-mouth and press from the March 7 event. Anyone who is interested should definitely start there. We are just giving the initial push as facilitators, because we hope that ultimately this initiative will be community run. And as teams and individuals – whether developers, community leaders, academics, researchers, advocates, or experts – continue to get involved, we encourage you to submit your commitments through a link on opportunity.census.gov to share what you’re doing. We plan to have more events to share and celebrate what has been created, including on June 4th for the National Day of Civic Hacking.