Water Piping in the Home 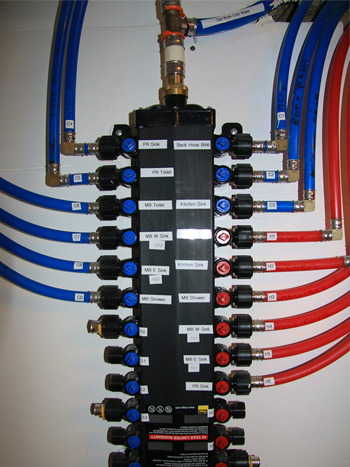 PEX permits the use of plumbing manifolds (shown), which provide greater control over the water distribution with individual shutoffs for each water-consuming appliance, making maintenance on sinks and toilets easier.

Water piping is an important part of the hidden infrastructure in the home. Many of us never think about the performance and reliability of our municipal water distribution system or the pipes in the walls of our homes.

Since the early days of plumbing, pipes have been made from numerous materials. Lead pipes were used in homes until the early 20th century, and many homes in the United States are still served by lead pipes despite the known health risks. Other widely used materials include galvanized steel, copper, polyvinyl chloride (PVC), chlorinated polyvinyl chloride (CPVC), polybutylene, and cross-linked polyethylene (PEX). Builders have based their choice of pipe material on its availability, cost, and acceptability at the time of construction. In the past 20 years, PEX has become many builders’ product of choice for piping because of its performance, cost, and potential environmental benefits.

PEX is made by linking the polymer molecules in polyethylene, which improves the flexibility and durability of the tubing. PEX has been used Europe since the 1970s and in the United States since the 1980s, initially for radiant heating. Its market share increased as builders and consumers began to use it for residential water distribution in the 1990s.

HUD studies helped demonstrate the performance and value of PEX. A key document was the Residential PEX Water Supply Plumbing Systems Design Guide, first published in 2006 and updated in 2013, which helped designers and builders understand how to capitalize on the benefits of PEX. HUD’s Office of Policy Development and Research (PD&R) supported the development of the successful first guide in partnership with the Plastics Pipe Institute (PPI), the Plastic Pipe and Fittings Association, and the National Association of Home Builders Research Center, now known as the Home Innovation Research Labs.

Working with trade organizations broadens market acceptance of families of products and reduces the differences between the various proprietary products offered by different manufacturers. Key to market acceptance is getting plumbers to use PEX and builders to help homeowners understand the product’s value. With a range of quality products available, builders will select products that best satisfy the needs of the project and customer.

The residential housing market is notoriously slow to adopt new products, and PEX was no exception. Many studies have shown that it can take more than 20 years for a new product to gain significant market share. Market surveys from Home Innovation Research Labs reported that in 1997, PEX had a 10 percent share of the U.S. plumbing market in single-family home construction; that share had grown to 16 percent by 2002. More recent market studies from Home Innovation Research Labs report that PEX has achieved a market share of 63 percent in single-family construction in 2016. While he wasn’t addressing PEX, Steve Jobs (co-founder of Apple) said “Overnight success stories take a long time.”

This growth in market share is due to several factors, including:

PEX is less expensive to purchase and install than copper tubing. Because PEX is often installed using a “home-run” approach with a continuous length of tubing, installation is faster and involves fewer fittings or connections, reducing the risk of leaks.

PEX prices are not as prone to market swings. For example, copper prices were stable during the 15 years before 2004, when it enjoyed a market advantage. Since 2004, however, the cost of copper has nearly tripled, which has spurred plumbers and builders to consider alternatives to copper piping. In some cases, builders chose PEX piping because theft of copper piping from homes where it had just been installed damaged the home and increased costs. Because PEX has no salvage value, thieves don’t target it.

The engagement of industry organizations was critical to the overall effort to popularize PEX because builders often needed support with technical issues. The Design Guide, along with other industry outreach, helped builders learn the most effective way to build with PEX. In addition to supporting the Design Guide, PD&R demonstrated the effectiveness of PEX in residential construction through studies of the time and costs of installing PEX compared to other materials.

Because of the outreach, builders and plumbers became more aware of PEX and increasingly confident in its use and long-term performance. This allowed them to effectively bid for and install PEX plumbing projects. Using new materials is largely a risk management process in which builders need to consider the purchase and installation costs of the product as well as any potential performance issues. As the potential risks of a particular product are understood, the cost will typically fall. As plumbers helping to construct new homes become more experienced with PEX, they will recommend it to their customers, which in turn will increase use in residential construction.

Although water conservation is not typically considered a primary benefit of PEX piping, the use of PEX tubing with a smaller diameter (typically 3/8 inch) actually saves hot water. Because the volume of a 3/8 inch tube is about half that of a ½ inch diameter tube, the wait for hot water is shorter, and less water is wasted during that wait. Also, lower thermal conductivity of PEX material helps to reduce heat loss.

PEX permits the use of plumbing manifolds, which provide greater control over the water distribution with individual shutoffs for each water-consuming appliance, which may make maintenance on sinks and toilets easier. For the homeowner, the advantages of PEX piping include:

As a result of the collaborative relationship with the industry, PEX is now established in the residential construction market and is increasingly available to builders and homeowners nationwide.