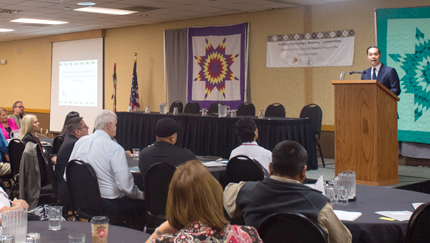 What was the purpose of the summit, who participated, and what was its significance?

True to its name, the purpose of the summit was to build partnerships, which — as we heard from many of the panelists — is the most effective way to successfully preserve and expand housing and build communities. HUD’s NPONAP and NAIHC did a fantastic job of assembling truly impressive panels made up of public- and private-sector housing experts, philanthropy and practitioners. The summit brought stakeholders together to discuss a remarkable range of topics, including housing conditions in tribal communities, the need to recapitalize current housing stock, and innovative ways to leverage resources to address severe housing shortages and increase homeownership opportunities in Northern Plains tribal communities.

It was certainly an honor to have Senator Heidi Heitkamp and HUD Secretary Julián Castro, along with many tribal leaders, join us in North Dakota for such an important event. A number of speakers and audience members commented on the sheer number of leaders in the room and how their presence and participation demonstrated a significant commitment to better housing outcomes for tribal communities. I think that’s largely why the 2 days were so productive — people came together to discuss issues, certainly, but also to share visions, suggest proactive solutions, and explore various paths for moving forward.

Over those 2 days, we heard from five panels, which were made up of tribal leaders, housing directors, and other practitioners such as government policy advisors, legal experts, and private lenders. The summit was an excellent chance for tribal communities to learn from one another. We also visited the Standing Rock Sioux Tribe to see how they are expanding housing opportunities and implementing Tribal HUD VASH, a demonstration program that offers a permanent home and supportive services in partnership with the Veterans Administration, to Native American Veterans who are experiencing or at risk of experiencing homelessness.

We heard that tribes want to increase mortgage lending on tribal trust land — what are the barriers to doing so?

Tribes are increasing their use of mortgage lending on tribal lands, as seen by the remarkable growth in HUD’s Indian Housing Loan Guarantee Program, commonly referred to as the Section 184 program, which is the mortgage insurance program managed by our Office of Native American Programs. Since its inception, the Section 184 program has guaranteed over 33,000 loans, representing over $5.4 billion dollars in increased capital into Native American Communities.

However, challenges are still present. Although an increasing number of lenders are willing to issue loans, there are still too few, especially compared with other areas of the country. One reason some firms are hesitant to lend in tribal lands is the perceived complexity of lending in these areas. It’s true that many different types of landownership exist across Indian County and that navigating land title issues has been a barrier to lending. As one of our lender panelists stressed, however, building relationships with stakeholders can mitigate some of this complexity. One of the HUD team’s major takeaways from the summit is the need for better collaboration among the federal agencies responsible for land title and housing programs, and we are taking steps to make those connections.

What are promising approaches or initiatives discussed at the summit and what is HUD doing as a result?

What really made an impact on me, as well as many of the HUD staff in attendance, was the power of local partnerships, because they were often at the heart of the success stories. Practioners shared their experiences and their overwhelming joy and sense of accomplishment when working with families and guiding them into homeownership.

Participating in these events reaffirms and reenergizes our longstanding commitment: to ensure access to safe and affordable housing for those who are most in need while respecting and valuing the government-to-government relationship with tribes as sovereign nations. One way we do that is through tribal consultation. We just completed a successful Negotiated Rulemaking session, the outcome of which is a consensus final rule that will govern the formula used to allocate Indian Housing Block Grant funding. Soon, we will also convene a new Tribal Intergovernmental Advisory Committee. The committee, which will consist of tribal leaders, will regularly meet with HUD to offer input on federal policies and plans. We also hope to continue holding events like this summit, and our recent Native youth summit, where we can bring together tribes, federal partners, and other stakeholders.

We heard that tribes are concerned about methamphetamine abuse and its effects. Why is that a housing issue?

Methamphetamine abuse has become a critical challenge facing some parts of Indian Country. The number of people who are turning to the drug, or who are exposed to the drug because they live with users in overcrowded homes, is truly tragic. What housing professionals wanted to highlight for us at the summit, however, was the damage that methamphetamine manufacture and use does to housing stock. The cost to rehabilitate a contaminated house is significant. Staff from tribally designated housing entities are reporting estimates of $30,000 per unit to renovate a unit that tests positive for methamphetamine. Dealing with the problem is diverting precious housing funds that tribes could be using to build new houses. It is an issue that many tribes are addressing, and we are working with them to develop the right partnerships and solutions to combat this epidemic.