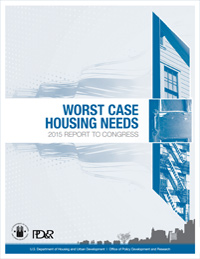 This biennial report investigates causes and trends in worst case housing needs, with special emphasis on changes during the 2011 to 2013 period, by examining the extent of these needs as well as the availability of affordable rental housing. An affordable housing unit is defined as one whose total rent (rent plus utilities) does not exceed 30 percent of the household’s maximum income. The report describes the prevalence of worst case housing needs by demographic category, assesses the supply of affordable housing by geography and income level, and analyzes the relative influence of demographics, market conditions, and the supply of government-provided housing assistance.