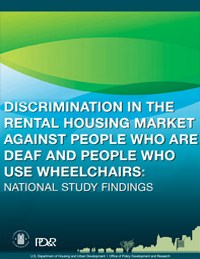 Despite the high incidence of housing discrimination reported, the extent of disability-based discrimination is not well documented. To address this research gap, HUD’s Office of Policy Development and Research sponsored a study to estimate the prevalence of discrimination in the private rental market against people who are deaf or hard of hearing and people who use a wheelchair. The study used paired-testing methodology, a common tool for identifying discrimination. In a paired test, two individuals — one a member of a protected class and the other a tester similar in every way except for the characteristic being tested — pose as equally qualified individuals; differences in treatment provide evidence of discrimination.

Although the findings of this study are compiled in a single report, the research examines discrimination against two distinct groups: those who are deaf or hard of hearing and those who use a wheelchair. As such, the study deployed different methodologies to identify discrimination. Tests with people who are deaf or hard of hearing focused on housing searches conducted with a telecommunications relay service (TRS), whereas tests with people who use wheelchairs used telephone calls followed up by in-person tests.

Findings and Implications for Future Research

The study also identified discriminatory practices against those who use wheelchairs. The testing found that housing providers are 1.7 percentage points less likely to make an appointment with individuals who use wheelchairs compared with ambulatory persons. When both testers are able to meet with a housing provider, individuals who use a wheelchair are 2.4 percentage points less likely to be told of available housing opportunities compared with the control group. On average, only 44 percent of advertisements for rental housing led to units identified by the research team as potentially accessible.

The disparate treatment of individuals with disabilities in their housing search can lead to inequitable opportunities and create barriers to finding housing. The findings indicate that people who are deaf or hard of hearing face barriers during the early stages of their housing search in communicating with housing providers about housing opportunities. People who use wheelchairs experience challenges at several points in the process, including finding accessible units, securing appointments with providers, being shown units, and getting a clear response to requests to make home modifications. These findings present important evidence of housing discrimination and also highlight the need for additional research and more detailed study on the full cycle of the housing search process for individuals with disabilities. For example, would the response of housing providers to deaf or hard of hearing individuals have been the same had they met in person?

Future research on the subject of housing discrimination against those with disabilities could examine the number of wheelchair-accessible units in regions across the country. This area of research is particularly important as the population ages and the number of individuals who use wheelchairs and the need for accessible housing increases. In addition, evidence suggests that housing providers need additional training in laws that prohibit discrimination, in reasonable accommodation, and in handling home modification requests. The study also identified the need for additional research on TRS technologies because housing providers varied in their willingness to communicate with deaf or hard of hearing individuals based on the type of TRS used.