An overview of HUD’s Smoke-Free Housing Initiative: An Interview with Peter J. Ashley

In this column, Peter J. Ashley, Director of the Policy and Standards Division of HUD's Office of Lead Hazard Control and Healthy Homes, talks about smoke-free public housing. 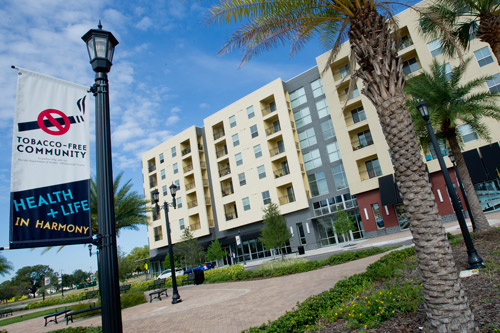 HUD promotes smoke-free policies in all HUD-assisted multifamily housing, like this housing for seniors in Tampa, FL. Image courtesy of the U.S. Department of Housing and Urban Development.

Why has HUD undertaken the task of establishing smoke-free public housing in multifamily buildings?

I think there are several compelling reasons for this. First of all, I think the health impact is probably the number one reason for doing it. Secondhand smoke has a lot of toxic and carcinogenic chemicals, and it doesn’t stay only in the unit of the smoker in a multifamily property. Research has shown that smoke travels throughout a building. Residents say they can smell when their neighbor is cooking fish; the smell is in the common hallways when they pass that unit. The same thing occurs with secondhand tobacco smoke, but it also poses a danger, especially to children and to individuals who suffer from cardiovascular disease, asthma, and other respiratory illnesses. The Surgeon General has said that there is no safe level of exposure to secondhand smoke. This conclusion came out in a report published just a few years ago. So, we believe that health is a compelling reason in itself to prohibit smoking in multifamily properties.

Also, tobacco smoking is an important safety issue in that it is the major cause of fatal residential fires. Remove this risk and you will reduce fires. Even if there are no fatalities or injuries, smoking is a major cause of fire loss and an expense for property owners. Finally, property owners save money if they prohibit smoking because when a unit turns over, they don’t have to spend as much on cleaning, painting, and replacing fire-damaged carpeting, etc. The cost savings have been shown to be substantial. So, when you add all these reasons up, the case for smoke-free housing is quite compelling.

Another point is that surveys consistently show that the majority of residents want a smoke-free environment. Sometimes they’re not the most vocal residents in the building when these policies are discussed. Oftentimes, it is the smokers who want to be allowed to smoke that are the most adamant. However, we have seen consistent evidence that the majority supports smoke-free rules.

How has HUD encouraged the adoption of smoke-free policies?

Well, we’ve done this through a number of means. Probably the most effective have been the program notices published initially by HUD’s Office of Public and Indian Housing in 2009. The notice strongly encouraged public housing agencies to adopt smoke-free policies in at least some of the properties that they managed. This was followed in 2010 by a similar notice published by the Office of Housing that covered subsidized multifamily properties. Both notices summarized the reasoning for implementing the policy, the advantages for property owners and managers in adopting smoke-free policies, and some of the recommended steps for doing so. They also provided sources of additional information on the topic. There was some confusion among property owners on whether or not this was actually a legal thing to do. The notices clarified that it is legal and that there is no constitutional right to smoke. So, it’s a perfectly legal action for housing providers to prohibit smoking within their properties.

We’ve also published additional guidance on this topic. In 2012, my office took the lead in developing smoke-free housing toolkits; there was one for property owners and managers and one for residents. The toolkits expanded on the information in the notices about the reasons for adoption of these policies, recommended steps for doing so, and discussed the associated legal aspects. These toolkits were widely distributed, both on our website and through hard copies sent to over 2,000 executive directors of housing authorities that provide traditional low-income public housing.

We’ve also put information up on the web. Both the Office of Public Housing and my office, the Office of Healthy Homes, have done this. We are continually improving our web content, and we’ve also presented at regional and national meetings of housing providers. For instance, NAHRO, the National Association of Housing and Redevelopment Officials, is an organization that a lot of public housing agencies belong to, as well as owners of other affordable housing. NAHRO has been very supportive of our policy; most recently, in October of 2014, we teamed with them to hold a symposium on the topic in conjunction with their national conference in Baltimore.

Also, in October of 2014, we published our Smoke-Free Housing Action Guide that provides additional information on the topic, a further expansion of the toolkits that we published in 2012. It includes information that HUD received through a 2012 Federal Register notice soliciting suggestions on best practices for implementing smoke-free policies, as well as information about barriers to implementation. We incorporated quite a bit of this input in the action guide. A unique aspect of the guide is our inclusion of summaries of interviews with nine housing providers who have implemented smoke-free policies. We asked these providers of public, subsidized, and multifamily housing about their experiences, what seemed to work best, and what advice they might have for other housing providers interested in implementing smoke-free policies. And we even interviewed one or two providers of market-rate housing. Although the guide is geared towards public and subsidized multifamily housing, we think that it’s useful for market-rate properties, as well. We’ve received good feedback and hope that it’s useful to those interested in adopting these policies.

Also, this year, Secretary Castro has said that he intends to go Smoke Free in all PHA owned public housing properties that they manage. A proposed rule is being reviewed by the Office of Management and Budget. It’s been distributed to other federal agencies for review and comment. We’re expecting it to be published in the Federal Register by the end of the summer for public comment.

What kind of support has HUD received from other federal agencies?

Well, we’ve been very pleased with the enthusiastic reception and support from other federal agencies. The Department of Health and Human Services (HHS) has been supportive, as the policy fits very well into its strategic plan to address tobacco control. Also, the CDC’s Office of Smoking and Health has been very supportive of HUD’s policy, and the office has looked to help us in any way that it could. Both agencies have collaborated with us; the Assistant Secretary of Health at HHS — which was Dr. Howard Koh at the time — and the Director of CDC’s Office of Smoking and Health signed a letter of endorsement that was included in our smoke-free toolkits. Both agencies reviewed the toolkits and constructively critiqued them, as well.

These agencies have also provided technical assistance to us. The CDC’s Office of Smoking and Health conducted and published very helpful research on this issue that HUD used and cited in our guidance. Also, under the American Recovery and Reinvestment Act, HHS provided Community Transformation Grants to support public health initiatives. Tobacco control was an important focus of the grants and many grantees used those funds to promote smoke-free housing. So, those grants provided organizations with funding for technical assistance to housing providers interested in adopting smoke-free policies and smoking cessation resources.

Also, EPA’s Office of Air and Radiation has been very supportive. Within that office, there is an Indoor Environments division that’s been working on indoor air quality issues. The division has been working on the issue of tobacco smoke in housing for years. They’ve also provided informative documents that we have included in our smoke-free housing toolkit.

What success have you seen so far?

Well, we’ve been very pleased that there is a lot of interest, especially among public housing providers, in voluntarily adopting smoke-free policies. Our latest estimate is that a little over 570 public housing agencies have adopted smoke-free polices in at least some of the multifamily properties that they manage. We don’t have a formal mechanism for agencies to report their adoption of smoke-free policies. Instead, our field staff have used publicly available information such as website postings to come up with this estimate; we think it’s a good number. We’re also aware of quite a few subsidized multifamily properties, sometimes referred to as project-based Section 8 properties, which have adopted smoke-free policies. We interviewed managers of some of these properties in our action guide.

Are there other resources available for public housing agencies, multifamily properties, and for owners of market-rate properties?

Yes, there’s quite a bit of good guidance out there, in addition to what HUD has published. I know the CDC has published some information on this topic, and so have some local health departments; Public Health-Seattle and King County has a nice publication [and] New York City has produced a publication on the subject. Some of these have come out of the Community Transformation Grants that I mentioned earlier. The American Lung Association has materials on its website, and its local chapters have provided great technical assistance to property owners on this topic, especially smoking cessation resources to residents who are using this opportunity to quit smoking. It’s important to note these policies don’t target smokers in terms of providing housing to them. Smokers are still, of course, allowed to live in public or subsidized households, but they just can’t smoke inside of this housing. Most housing providers allow smoking on their properties; oftentimes, they use a 25-foot buffer from the property boundary.

For the smokers who have already been thinking about quitting when this policy goes into effect, it kind of pushes them towards deciding: “Hey, this is an opportunity to quit smoking.” So, we think it’s very important to provide smoking cessation resources to these residents. Tobacco control programs like the American Lung Association’s, also local health department and state health department programs often provide cessation services. There are many sources of help. One that we’ve found out about recently is CDC’s tobacco control program. The CDC supports state health departments through tobacco control grants to all 50 states. In March 2015, the most recent round of grants from the CDC went into effect, and the CDC began requiring grant recipients to work with public housing providers in their states on smoke-free housing issues. So, CDC funds often get passed down to local programs and we are hoping that this will be an invaluable source of technical assistance to housing providers — not just public housing, but other providers of affordable housing in those states. HUD plans on working with the CDC to have direct discussions with their grantees on how we can best support them in providing technical assistance within their states.

Peter, thank you very much.

Thank you. It’s an important topic and we are very excited to see how many housing providers adopt smoke-free policies.