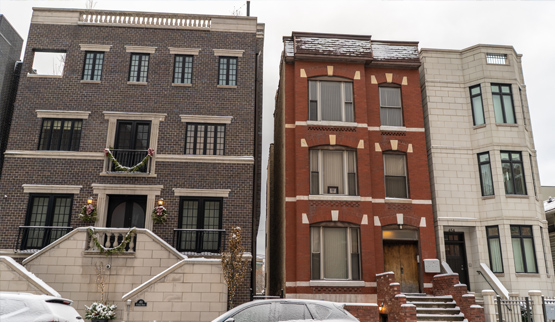 Gentrification and the subsequent displacement of longtime residents are major concerns in the Pilsen neighborhood in Chicago’s West Side and in some of the city’s North Side neighborhoods along a 2.7-mile section of “the 606,” an abandoned rail line that the city converted into a linear park. Public investment in the 606 has fueled much of the area’s gentrification. Pilsen’s cultural diversity and amenity-rich location have made it a popular place for young workers to live, and tax increment financing and other government incentives have also contributed to the area’s revitalization. Long-time residents of these Chicago communities fear that the naturally occurring affordable housing in two- to six-unit structures — some of which were originally single-family houses — will continue to be converted into expensive single-family homes. In 2021, the Chicago city council enacted two “anti-deconversion” ordinances restricting the conditions under which such conversions can occur as well as a third ordinance adding a surcharge to demolition permits.

As the 606 became a popular place to stroll, run, and bike, nearby neighborhoods also became more attractive to new residents, leading to concerns about gentrification and displacement that were highlighted in a 2016 report by the DePaul University Institute for Housing Studies. Gentrification is a particular concern along the western section of the 606, which consists primarily of two- and three-plex rental properties that are currently occupied by low-income and Hispanic tenants. The naturally occurring affordable housing is vulnerable to conversion to expensive housing marketed to new residents. Since the trail’s groundbreaking in 2013, housing prices around 606 West have risen by nearly 50 percent compared with a rise of less than 15 percent along 606 East, which has a strong and stable housing market. From 2013 to 2018, approximately 175 apartments were lost in the 606 West area when nearly 60 two- to four-unit residential buildings were converted.

In January 2020, in response to residents’ concerns about the rising number of conversions, the city council imposed a temporary moratorium on demolition permits for residential buildings in the 606 West area until the city could develop a permanent solution. After heavy lobbying by residents, the council adopted Ordinance SO-2020-6206, which created the Predominance of the Block (606) overlay zoning district for the 606 West area. The ordinance prohibits the construction of single-family houses on parcels zoned RS3, which permits single-family and two-plex buildings, if more than half of the parcels on a blockface have structures with more than one unit. The same prohibition applies to parcels with zoning that permits single-family, two-plex, townhouse, and multifamily (three or more units) buildings, if more than 40 percent of the parcels on a blockface contain buildings with more than one unit. The primary purpose of the ordinance is to limit the conversion or replacement of existing multiplex structures with single-family houses, although the ordinance similarly restricts the construction of these houses on vacant lots.

Pilsen is a working-class community with a large immigrant population, most recently from Latin American countries. Pilsen is much denser than the 606 West area and has many three- to eight-unit residential structures. The neighborhood has gentrified over the past several years. Approximately 75 apartments were lost between 2013 and 2018 when 25 two- to four-unit buildings were converted to single-family homes. The city council adopted Ordinance O2020-6207, creating the Multi-Unit Preservation (Pilsen) overlay zoning district, at the same time as the 606 West ordinance was enacted. The Pilsen ordinance prohibits the establishment of any single-family or two-plex building on parcels with base zoning that permits single-family, two-plex, townhouse, and multifamily (three or more units) buildings unless most of the structures on a blockface are single-family houses or two-flats. The ordinance ensures that new housing on blocks with primarily multifamily housing will contain three or more units.

In 2021, the city council adopted a third ordinance designed to preserve affordable housing in both the 606 West area and Pilsen. Ordinance O2021-746 imposes a surcharge for permits to demolish residential buildings. The surcharge is $15,000 for the demolition of a single-family detached house, two-flat, or townhouse and $5,000 per unit for the demolition of buildings with three or more units. The fee does not apply if the building would be replaced with residential structures in which at least 50 percent of the units are reserved for households earning up to 60 percent of the area median income. Revenues from the demolition surcharge go to the Chicago Community Land Trust to construct and preserve affordable housing in the two areas.

Click on the following links to access ordinances and information regarding gentrification in the 606 West area and Pilsen:

Find more plans, regulations, and research that state and local governments can use to reduce impediments to affordable housing on HUD User's Regulatory Barriers Clearinghouse.