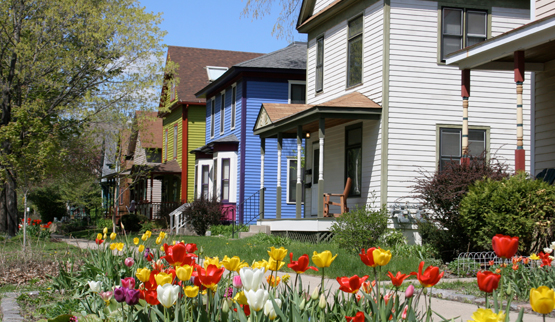 Property owners in single-family neighborhoods can now choose to build two- and three-unit houses under recent zoning changes that comply with the Minneapolis 2040 plan’s goals to provide affordable housing and eliminate disparities.

The pace of population growth in Minneapolis from 2010–20 has been unrivaled since 1950. The failure of housing supply to address increasing housing demand due to population growth — between 2010 and 2016 the city added 37,000 residents but only 12,000 housing units — has driven up housing prices. Meanwhile, longstanding spatial and economic disparities have resulted in the exacerbation of existing inequalities. Since 2000, upward pressure on housing costs has resulted in 15,000 fewer affordable units available for households earning 50 percent of the area median income.

In 2018, the city council adopted its most recent comprehensive plan, Minneapolis 2040. The plan covers land use, transportation, environmental, and other issues affecting how the city will develop and manage its growth. A main theme of the plan, as expressed by residents who participated in over 100 planning process meetings spanning over 2 years, is an acknowledgment of past discriminatory policies, their continuing impact, and the impetus to eliminate existing disparities. Equity, which is crucial to how the comprehensive plan addresses housing issues, is integrated in 18 of the plan’s 23 housing-related policies. One of the plan’s action items is to amend the zoning ordinance to allow small-scale residential structures with multiple units in neighborhoods of single-family houses. According to The Century Foundation, 70 percent of the city’s residentially zoned land was designated for single-family houses, a major regulatory barrier to satisfying housing demand. Three months after the plan’s adoption, an ordinance amending the zoning code was introduced before the city council. The proposed amendment would allow new housing types in neighborhoods that 75 percent of the city’s population called home. Despite the ordinance’s sweeping scope, the amendment was adopted within 8 months of its introduction, a result of the extensive public engagement effort for Minneapolis 2040 that brought the public into agreement with such broad zoning changes. As outlined in a Lincoln Institute of Land Policy report, city officials emphasized the importance of increasing housing and affordable options to provide greater equity citywide.

When the city council adopted the amendment, PBS NewsHour and other sources reported Minneapolis had become the first large city in the country to end single-family zoning. Although literally true — the zoning ordinance now contains no zoning districts labeled single-family, and all the lowest density districts are listed as multiple family districts — property owners are still allowed to build single-family detached houses. Under the new ordinance, however, owners can now choose to build two- and three-unit residential buildings.

Observers such as Strong Towns have commented that only three permits for triplexes were applied for in the first 8 months of 2020. However, city officials did not anticipate a quick spike in development, and the Minneapolis 2040 plan calls for a multifaceted implementation effort with interventions scheduled over the short, medium, and long term. Those interventions include financing such as $40 million allocated for major affordable housing programs in the

Click on the following links to access the plan and ordinances and information about how they address regulatory barriers:

Find more plans, regulations, and research that state and local governments can use to reduce impediments to affordable housing here.