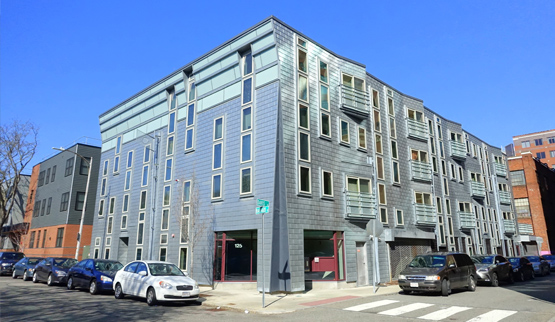 Economic growth in the Boston metropolitan area has not been accompanied by proportionate housing development; between 2010 and 2018, 15 area cities and towns added 110,000 residents and 148,000 jobs but only 32,500 housing units. A major tool for addressing such housing shortages is Chapter 40B, a state regulation granting affordable housing developers zoning exemptions in jurisdictions where fewer than 10 percent of housing units are listed in the state’s Subsidized Housing Inventory (SHI). Because 14.8 percent of Cambridge’s units are listed in the SHI, Chapter 40B incentives are not available to affordable housing developers in the city. Nevertheless, Cambridge policymakers recognized that the city needed more affordable housing: according to 2014–2018 Comprehensive Housing Affordability Strategy data, 35 percent of Cambridge households paid more than 30 percent of their income toward housing costs, and 17 percent of Cambridge households were severely cost burdened, paying more than 50 percent of their income toward housing costs.

In 2020, Cambridge enacted the Affordable Housing Overlay (AHO) to facilitate affordable housing production in the city. Following 2 years of deliberation and public input, the city council approved AHO, which allows affordable housing developments in all zoning districts except those designated for open space. The units must be affordable to households earning incomes less than or equal to the area median income. Through an as-of-right approval process rather than an uncertain, discretionary process, these developments can include townhouses and multifamily buildings and the conversion of existing structures. Additional incentives include density bonuses and relaxed parking requirements.

In AHO’s first 16 months, 4 developments have taken advantage of the new regulatory incentives. The Cambridge Housing Authority (CHA) oversaw one of those projects: the redevelopment of Jefferson Park, a public housing property in North Cambridge dating from the early 1950s. CHA redeveloped a portion of Jefferson Park before the city enacted AHO, demolishing 108 units and building 103 new units; for the remainder of the Jefferson Park site, CHA is planning to use AHO to replace 175 units with roughly 275 units.

CHA had to make several concessions to obtain development approval for the first phase of Jefferson Park, according to Margaret Donnelly Moran, director of planning and development at CHA. CHA was forced to scale back the number of family-sized, three-bedroom units, replacing them with one-bedroom units. In contrast, 40 percent of the units in the second phase will have three or more bedrooms. According to Clara Fraden, CHA’s deputy director of planning and development, AHO will allow the second phase to proceed with far greater certainty, requiring fewer costly redesigns and delays than CHA experienced with the first phase. CHA executive director Michael Johnston reports that, because of the density bonus allowed under AHO, the second phase of the Jefferson Park redevelopment will include the 100 additional units.

Click here to access the text of AHO and information about how it addresses regulatory barriers. Find more plans, regulations, and research that state and local governments can use to reduce impediments to affordable housing at HUD User's Regulatory Barriers Clearinghouse.