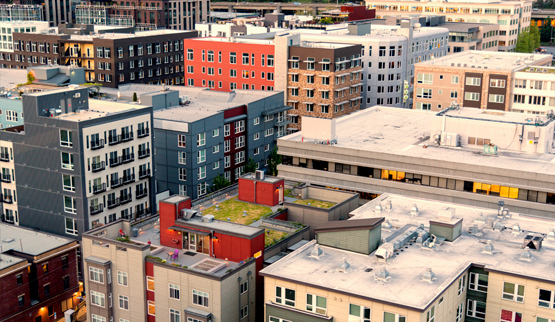 To incentivize the development of affordable and market-rate housing in the state's urban areas, Washington state instituted the Multifamily Housing Tax Exemption (MFTE) program, which has been modified several times since its creation in 1995. MFTE enables local governments to exempt the value of new housing construction, conversion, or rehabilitation from property taxes for certain residential developments. The MFTE legislation provided for 8-, 10-, and 12-year property tax exemptions. The 8- and 10- year exemptions targeted the production of multifamily housing in dense areas with no affordability requirement, whereas qualifying for the 12-year exemption required that at least 20 percent of the units in rental or for-sale developments be affordable for low- and moderate-income households. Despite these incentives, Up for Growth reports that housing construction in the state fell short of demand by 225,000 units between 2000 and 2015. The report notes an underproduction of affordable, multifamily housing across the state and advocates denser construction in amenity-rich areas to help close the gap of "missing middle" and other affordable housing. A 2019 study of the effects of MFTE found that 424 developments received a tax exemption and 34,885 housing units were created, with 21 percent of those units being affordable. In 2021, the legislature adopted SB 5287 to significantly amend the MFTE program, with the aim of "encouraging urban development and density, increasing market rate workforce housing, developing permanently affordable housing opportunities, promoting economic investment and recovery and creating family-wage jobs.” To achieve these goals, SB 5287 enhances the tax exemption program to better stimulate multifamily opportunities, including affordable housing.

SB 5287 amends the 8- and 12-year tax exemptions to preserve and increase the supply of affordable housing. For developments benefiting from either exemption, the bill extends the exemption for another 12 years. To qualify for the extension, at least 20 percent of the units in the development must be affordable to low-income households. The bill also requires that owners of properties receiving this 12-year extension provide notice and relocation assistance to tenants of the project's affordable units before the tax exemption finally expires.

In addition, SB 5287 sets specific location requirements to encourage urban development that supports transit and promotes efficient land use. Until 2024, counties can designate areas within one-quarter mile of a frequent-service bus corridor as new residential target areas where developments would be eligible for tax exemptions. Before the designation of any new residential target area, the county must evaluate the risk of displacing existing residents and, if the risk is more than minimal, propose mitigation measures. Such measures could include granting displaced residents the right of first refusal to occupy the new units. New 12-year exemptions are allowed in zoning districts with a minimum density of 15 or 25 dwellings per acre depending on the city's population. The same location restrictions apply to developments seeking affordable homeownership 20-year tax exemptions. Developments seeking other 20-year exemptions must be in cities with fewer than 65,000 residents and within 1 mile of frequent, high-capacity transit.

Click here to access the text of SB 5287 and information about how it provides incentives for affordable housing production. Find more plans, regulations, and research that state and local governments can use to reduce impediments to affordable housing at HUD User's Regulatory Barriers Clearinghouse.