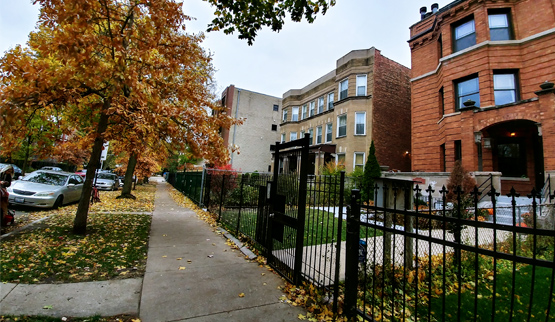 Evanston’s reparations program began with housing as the first area to address the city’s history of discrimination.

A northern suburb of Chicago, Evanston is a city of approximately 78,000 overlooking Lake Michigan. In June 2019, Evanston’s city council adopted Resolution 58-R-19, Commitment to End Structural Racism and Achieve Racial Equity. The resolution acknowledges that historically, Evanston had “allowed and perpetuated racial disparity through the use of many regulatory and policy oriented tools,” citing zoning laws that restricted where African-Americans could live or own property, routine disinvestment in the African-American community, and systemic racial bias in government services. Resolution 58-R-19 laid the groundwork for Evanston’s Restorative Housing Program, the first local reparations program in the United States.

After adopting this resolution, the city council’s Equity and Empowerment Commission held two community meetings to solicit public comment about reparations, gathering information on residents’ priorities and ideas. In these meetings, citizens identified five priority areas that reparations should address: economic development, education, finances, history and culture, and housing. The city council, acting on the recommendations of a new subcommittee (later succeeded by a Reparations Committee), passed a resolution in November 2019 that committed the proceeds of Evanston’s Municipal Cannabis Retailers’ Occupation Tax to the newly established Evanston Reparations Fund. The city chose the cannabis tax as a revenue stream because it had been recently enacted and not yet designated for another purpose, was expected to be a robust funding source that would grow as more dispensaries were established, and constituted a voluntary tax applying only to sales of recreational cannabis. In addition, the council wanted to connect the racially disparate impact of its policy of arrests for cannabis possession to the reparations program.

The Reparations Committee selected housing as the first area to address because of the city’s extensive history of discriminatory and unfair practices. The committee held 15 public meetings on a program to promote, preserve, and stabilize African-American homeownership in Evanston and considered several options, including direct cash payments. Although such payments would give recipients more spending flexibility, the committee decided against them because they would be subject to burdensome state and federal taxes.

The city council agreed with the Reparations Committee’s recommendation and established the Restorative Housing Program. According to the guidelines, the program issues grants of up to $25,000 to African Americans who lived in the city as adults between 1919 and 1969 (termed “ancestors” in the program), their adult descendants, or any adults who can prove that they experienced housing discrimination within the city after 1969. The grants may be used for home improvements, mortgage assistance, or down payments and closing costs for a home located in Evanston and occupied as the grantee’s primary residence. The council set the program’s initial funding at $400,000 because although the city council committed a total of $10 million to reparations, the cannabis tax delivered less than the expected $1 million in average annual revenue.

The defined eligibility period for ancestors reflects Evanston’s history of racially discriminatory policies. The city adopted its first zoning ordinance in 1921, marking the beginning of an era of municipal policy designed to restrict African-American residents to overcrowded neighborhoods adjacent to industrial areas. The cutoff date of 1969 is the year Evanston adopted a fair housing ordinance. The path to eligibility for residents who are neither ancestors nor descendants exists because the adoption of this ordinance did not resolve housing discrimination.

Over 6 weeks, the Reparations Committee received more than 600 applications to the program and verified the submissions of 122 ancestors. The committee decided to prioritize funding for ancestors and randomly selected 16 applicants, which exhausted the program’s budget. Tasheik Kerr, assistant to the city manager, reports that as of May 2022, the committee had not yet determined whether the Restorative Housing Program would receive funding beyond its initial allocation. If the city council decides to supplement the cannabis tax revenues with another funding source, the committee will issue grants to the remaining 106 ancestors and then move on to eligible descendants and individuals who experienced discrimination. Corporation counsel Nicholas Cummings says that the Reparations Committee is likely to begin work on the next reparations program, addressing a new priority area, by the end of 2022.