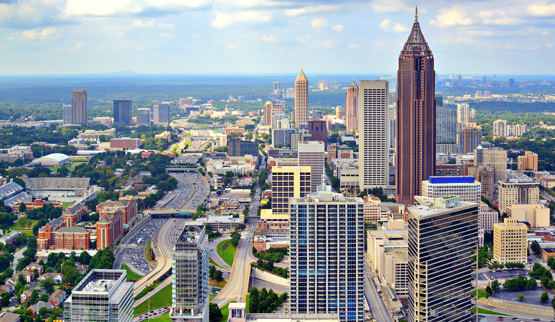 The city of Atlanta's housing plan calls for increasing density and streamlining approval processes to increase the affordable housing supply.

The Atlanta, Georgia metropolitan region was the third fastest growing area in the U.S. in 2017, with the city of Atlanta adding 486,000 people since 2000. As this growth has occurred, only 105,000 units have been permitted, and only high-income households can afford many of them. In 2016, almost half of the city’s households paid more than 30 percent of their income on housing, and housing and transportation costs on average accounted for 48 percent of residents’ incomes. The percentage of such cost-burdened households is greater on the south and west sides of Atlanta, where larger portions of the population are people of color.

Presented by Mayor Keisha Bottoms on June 24, 2019, One Atlanta: Housing Affordability Action Plan contains 45 actions to ensure that long-time residents and others wishing to live in the city can find an affordable home. The Atlanta Journal-Constitution reports that One Atlanta builds on recommendations of HouseATL, an advisory group composed of business and civic leaders, to address housing affordability in the city through public-private partnerships. The plan also incorporates a 2017 campaign pledge from Mayor Bottoms to spend $1 billion to construct and preserve 20,000 rental and for-sale affordable housing units by 2026. The mayor admits this is an ambitious goal, and several local critics agree. Going further, Professor Dan Immergluck of the Urban Studies Institute at Georgia State University recommends that the plan should include more specific targets and a commitment from the city to increase funding.

The plan presents four goals that address existing conditions that need to be changed to make Atlanta housing affordable and equitable. Each of the plan's goals call for reducing barriers to affordable housing. Zoning proposals would increase densities for affordable housing, allow less costly housing types, and promote transit-oriented development. Streamlining approval and permitting procedures for affordable housing and infill development are among the plan’s administrative improvements. Tax policies include both expanded homestead exemptions and the imposition of a vacant land tax. In addition, the plan promotes fair housing and equitable development through such measures as preparing community retention plans where neighborhood improvements are proposed, adopting a source of income ordinance, and enhancing anti-discrimination policies. The plan also calls for a code innovation team and housing innovation lab to find new opportunities for reducing regulatory barriers.

The mayor’s office has created an online dashboard to track progress on implementing One Atlanta. The dashboard records $251.6 million in public funding for 3,506 affordable units that were under construction or completed at the end of 2019. Not yet included in the dashboard are the 97 units in the first phase of the Atlanta Housing Authority’s Herndon Square development. The groundbreaking took place on January 7, 2020, and the development will eventually include 681 apartments, 45 percent of which will be affordable to households earning up to 80 percent of the area median income. The dashboard also does not include a proposal for a $100 million city Housing Opportunity Bond to help affordable housing providers create housing for lower-income households and persons experiencing homelessness. The bond would also support downpayment assistance and funding for repairs for seniors and low-income households. The dashboard will be updated quarterly, and additional measures will be included in the future.

Click here to access Atlanta’s housing plan and information about how the plan addresses regulatory barriers. Find more plans, regulations, and research that state and local governments can use to reduce impediments to affordable housing here.