The Adaptive Reuse of Commercial Space as Housing in California

Demand for office and retail space in commercial buildings is declining with the transition from brick-and-mortar shopping to ecommerce and the increasing appeal of remote work, both of which have been accelerated by the COVID-19 pandemic. At the same time, the affordable housing crisis has led policymakers, advocates, and planners to consider commercial space as a new tool in California’s larger strategy to increase housing supply. To understand the viability and conditions surrounding commercial space conversion, the Terner Center for Housing Innovation at the University of California Berkeley released two studies and hosted a webinar in November 2021 to discuss the findings. The event, “Converting Commercial Lands to Housing: Potential Impact and Promising Models,” featured a panel moderated by managing director Ben Metcalf. The panelists included Diana Jahns, resident of a commercial-to-residential housing project; Elliot Kwon, graduate student researcher at the Terner Center; Andrew Cussen, developer at Regency Centers; and Tom Pace, director of community development for the city of Sacramento, California. 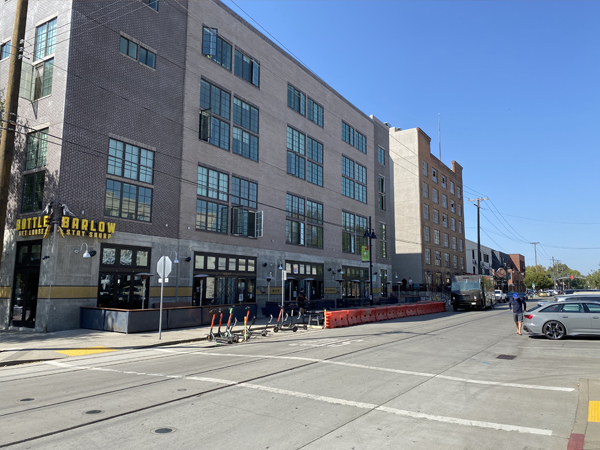 Adaptive reuse of commercial space can be appealing to housing developers given common building features, such as high ceilings and large windows that are suitable for loft apartments, which is the case for Warehouse Artist Lofts. Photo credit: Jarrod Affonso

Issi Romem, a Terner Center fellow, presented the findings from the first study, which offers data on existing conversions across California and models the future of conversions under current policies and development practices. A key finding is that commercial land is ubiquitous, with locations in wealthy and poor areas and the downtowns and peripheries of cities. More specifically, the data show that in the state’s four major metropolitan areas — Los Angeles, San Francisco, Sacramento, and San Diego — the conversion rate is higher at the city center and tapers off as distance from the center increases.

Gathering data from 2014 and 2019, the researchers estimate that 10 percent of new housing was constructed on commercial land, with Los Angeles accounting for almost three quarters of these conversions. The researchers and panelists agree that the larger percentage in Los Angeles is due to more permissive legislation and marketing of the new legislation to developers.

Although demolitions are the most common type of commercial conversions, panelists were interested in how to encourage developers to choose adaptive reuse of buildings, a more environmentally sustainable option that avoids demolition waste and carbon emissions. The second paper, coauthored by Kwon, found that architectural design, legislative constraints, and economic feasibility are the top three factors affecting adaptive reuse potential. The original building design determines how many units can be included. Many commercial developments were built in the mid-20th century and have design features common to that era that limit the natural lighting and ventilation needed for suitable living space. The high ceilings common to these buildings, however, are an attractive feature that make adaptive reuse ideal for lofts that can serve as live-work residences.

The panelists acknowledged that legislation for rezoning is important to help or encourage housing developers to repurpose commercial space. For example, Los Angeles’ adaptive reuse ordinance, passed in 1999, helped expedite regulation and clarify building and zoning codes. Pace compares the timing of Los Angeles’ legislation with that of Sacramento, whose legislation for by-right conversions was not passed until 2013. Although both cities had active legislation during the study period, Pace argues that Sacramento’s housing produced from commercial space significantly lags Los Angeles because time and effective marketing are needed to see the impact of policy changes. 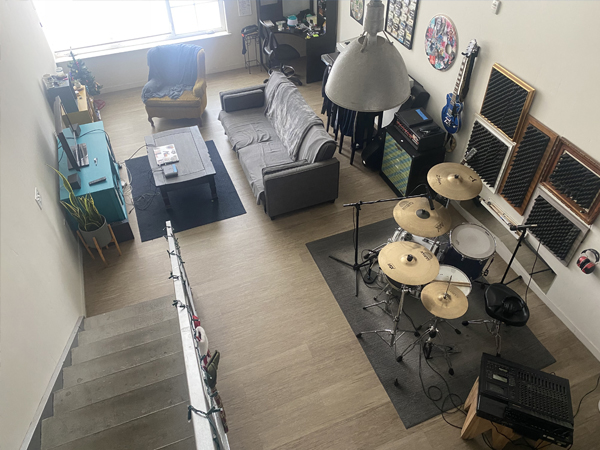 Warehouse Artist Lofts is a commercial to residential housing conversion that offers artist lofts, where residents can live and work remotely in one space. Photo credit: Jarrod Affonso

The panelists also weighed in on the topic of economic feasibility for the future of commercial conversions. Pace explains that in Sacramento, commercial conversions to nonresidential uses are sometimes more desirable because bringing a building up to code for residential use generates higher developmental impact fees. He suggests that state or local jurisdictions eliminate or waive these fees to encourage adaptive reuse for housing. To increase conversions to high-density developments in specific locations, the state can fund needed infrastructure improvements that result from repurposing commercial space. This funding is especially important in high-demand areas, where developers are more motivated to convert existing buildings into larger structures.

Emerging Trends, Limitations, and Opportunities of Commercial to Residential Conversions

Romem argues that even with more permissive legislation, the models show that housing produced on commercial lands would account for only 4 percent of California’s Regional Housing Needs Assessment allocations in the Los Angeles and San Francisco metropolitan regions. Cussen points out that developers may find it more financially advantageous to convert commercial properties into hotel space, package distribution centers, or other industrial uses. Because of this tendency, policymakers and strategists should not rely on converting commercial land as the only housing solution.

Another threat is that the concentration of commercial buildings at the neighborhood level has implications for the geography of wealth distribution following conversions to apartments, which the Sacramento and Los Angeles legislation specifically targets. Romem and colleagues found that, although commercial buildings are located throughout the city, they exist in clusters, and they caution that relying too heavily on conversions as a housing solution could lead to class divisions in which the wealthy live in low-density, single-family residential zones and the less affluent reside in high-density commercial corridors.

If policymakers are intentional about where adaptive reuse can occur, however, an opportunity exists to revitalize these commercial corridors, which often are also transit corridors. Pace emphasizes the benefit of placing housing where neighborhood resources, such as grocery stores and public transportation, are within walking distance, such as in Sacramento’s Warehouse Artist Lofts (WAL), an affordable mixed-use, mixed-income residential building where Jahns resides and works from home as an artist. WAL is a successful adaptive reuse project that aligns with changing needs around the demands for remote work, but it also showcases the role of conversions in meeting affordable housing needs while creating a sense of community at the neighborhood level.