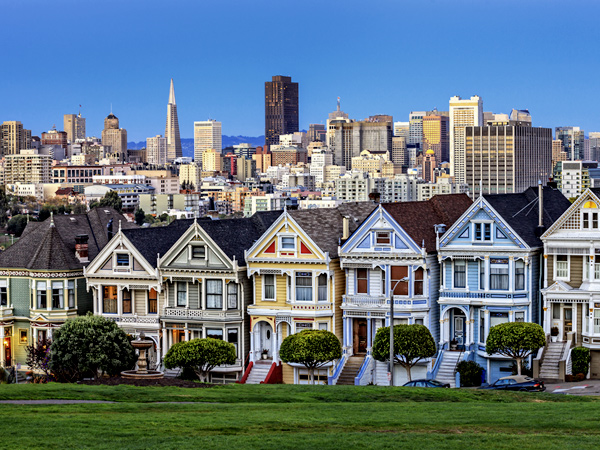 The reasons for housing unaffordability can differ from market to market, such as exorbitant housing prices in tight markets like as San Francisco, California (shown), or low wages in service-industry-heavy markets like Orlando, Florida.

Households nationwide face a mismatch between income and housing costs, resulting in high percentages of cost-burdened households, housing instability, and, in the most extreme cases, homelessness. Wages have been rising modestly but have failed to keep up with housing costs, and in many places the housing supply remains inadequate. Although the details differ from market to market — exorbitant housing prices in tight markets such as San Francisco or low wages in a service-industry-heavy market such as Orlando, for example — the end result is the same: too many people are paying too much of their income for housing. For various reasons, the market is simply not able to supply affordable housing at several price points. As private-sector developer Ron Terwilliger put it, “I know that the cheapest apartment that we can build in this country, without subsidy, only half of America can afford.”

On February 13, Habitat for Humanity hosted “Local Voices Informing Federal Action: A symposium on home affordability,” part of its ongoing Cost of Home campaign to improve home affordability. In the opening plenary, Lisa Gordon, president and chief executive officer (CEO) of Atlanta Habitat for Humanity, moderated a discussion with Eileen Fitzgerald, head of housing affordability philanthropy for the Wells Fargo Foundation; Maurice Jones, president and CEO of the Local Initiatives Support Corporation; and Jonathan Reckford, CEO of Habitat for Humanity International, about solutions to housing affordability challenges. The panelists agreed that although no single “silver bullet” solution exists, action can be taken to improve affordability “across the whole value chain,” as Reckford put it, as well as at local, state, and federal levels.

Reckford explained that because of increasing land prices, rising materials and construction costs, accelerating labor costs, and local fees and regulatory costs outpacing income growth, developers cannot build housing that is affordable to low-income residents and still make a profit. The challenge, therefore, is to resolve the gap between those costs and what households can afford to pay. Jones added that the lack of supply also stems from a lack of capacity; not enough developers know how to produce supply across the income spectrum, particularly at the lower end. He noted that the development of middle- and low-income housing fell off after the Great Recession and has not yet recovered. He suggested that a particular need exists for more nonprofit developers and developers of color in this space.

Among the solutions intended to close the gap between incomes and housing costs are rental assistance, low-income housing and other tax credits, donated land, and strategies to increase density to mitigate high land costs. As creative, effective solutions are proven at the local level, the federal government can help scale those solutions. This assistance could take the form of increased investment of resources or incentives to facilitate local efforts. Reckford noted that multisector cooperation will be important and that bridge builders are needed to foster such work. Jones said that this work is happening to some extent at the state level, with financial institutions, nonprofits, and healthcare and higher education institutions partnering to invest in housing, but he added that the federal government could do more to help grow such coalitions.

Making the case for affordable housing

Fitzgerald discussed the need to help people think differently about solutions that will help overcome affordability challenges, such as getting people to embrace increased density in their neighborhoods, convincing policymakers that investments in affordable housing are fiscally smart, and, as Jones added, that housing is not just about housing. Jones argued, “[H]ousing is ultimately about the competitiveness of a state or region, the health and well-being of families, the ability of children to perform in school.” Elaborating on the well-being of families as well as fiscal benefits, Fitzgerald explained that safe, stable, and healthy housing leads to health savings, decreased use of costly nursing home facilities, and better education outcomes among other benefits. Finally, Reckford suggested that affordable housing advocates will be most persuasive when, in addition to pointing to data, they make their stories personal. As an example, he shared the story of a young man who moved into a Habitat for Humanity home in Charlotte that afforded him the stability that he needed to succeed in school and go on to become a banker and a member of Habitat for Humanity’s global board of directors. Reckford said that such stories can convey the great unrealized potential of people who lack stable homes and are just waiting for an opportunity.