Housing for Families and Transitional Youth Opens in San Francisco 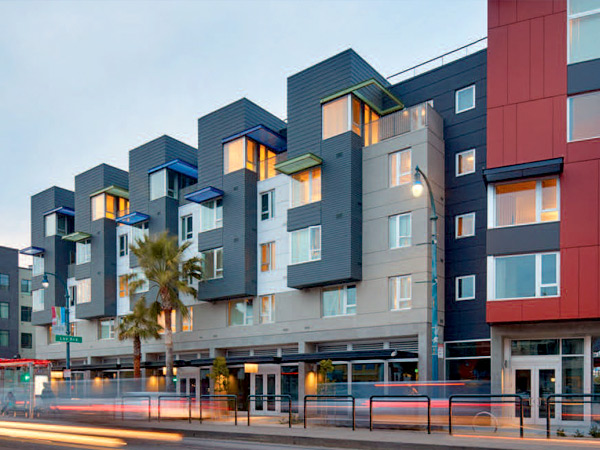 Addressing the needs of transitional age youth has become a critical issue in San Francisco, California. The city defines transitional age youth (TAY) as individuals between the ages of 18 and 24 who are exiting foster care or other public systems or are otherwise at risk of not successfully transitioning into adulthood, including young adults on probation, youth with disabilities, and young adults without a high school diploma. According to the Transitional Age Youth Initiative, up to 9,000 TAY in San Francisco need supportive services. Housing is also an essential need among these youth, because their risk of homelessness is high. HUD’s “2016 Annual Homeless Assessment Report to Congress” found that among the Continuums of Care in major U.S. cities, San Francisco had the highest rate (91.6%) of unaccompanied homeless youth who are unsheltered. In response, San Francisco has made housing with supportive services for TAY a top priority. Opened in 2015 with 71 units, 1100 Ocean Avenue is one of the developments helping to meet the housing needs of TAY as well as area families. Developed by Mercy Housing and the Bernal Heights Neighborhood Center, the project includes supportive services and 25 housing units designated for TAY. Located in a transit-rich neighborhood, 1100 Ocean Avenue also aligns with the goals of the city’s Balboa Park Station Area Plan.

The city of San Francisco’s plans to revitalize the neighborhood surrounding the Bay Area Rapid Transit (BART) system’s Balboa Park station were the impetus for the 1100 Ocean Avenue development. After more than a decade of soliciting input and involving local stakeholders in the planning process, the city approved the Balboa Park Station Area Plan in 2008. Among the plan’s objectives were increasing housing options affordable to households of various income levels and creating physical and visual links between the Balboa Park station; the Ocean Avenue commercial district; and City College, the local community college. To foster development that furthered these objectives, the city released a request for proposals for affordable housing development on a site along Ocean Avenue near City College. In response, the Bernal Heights Neighborhood Center, a community-based organization that was looking to expand its footprint in San Francisco, partnered with the national, nonprofit affordable housing developer Mercy Housing to submit the winning proposal for 1100 Ocean Avenue, an affordable housing development for low-income households.

Around the same time, the city began focusing on the prevalence and needs of vulnerable young adults. In 2007, the city released a report that recommended expanding housing opportunities for homeless or marginally housed youth. After working with the Mayor’s Office of Housing and Community Development, the Bernal Heights Neighborhood Center and Mercy Housing decided to set aside some of 1100 Ocean Avenue’s units for TAY.

In February 2015, the 5-story 1100 Ocean Avenue building opened with 25 units for TAY residents earning up to 20 percent of area median income (AMI), 1 manager’s unit, and 45 units affordable to households earning up to 50 percent of AMI. The 25 youth apartments are studio and one-bedroom units, and the remaining apartments are composed of one-bedroom, two-bedroom, and three-bedroom units. All units include full kitchens and bathrooms. The city’s Department of Homelessness and Supportive Housing refers the youth who live in the 25 designated units, and the 45 affordable units are open to eligible low-income households and housing choice voucher recipients. 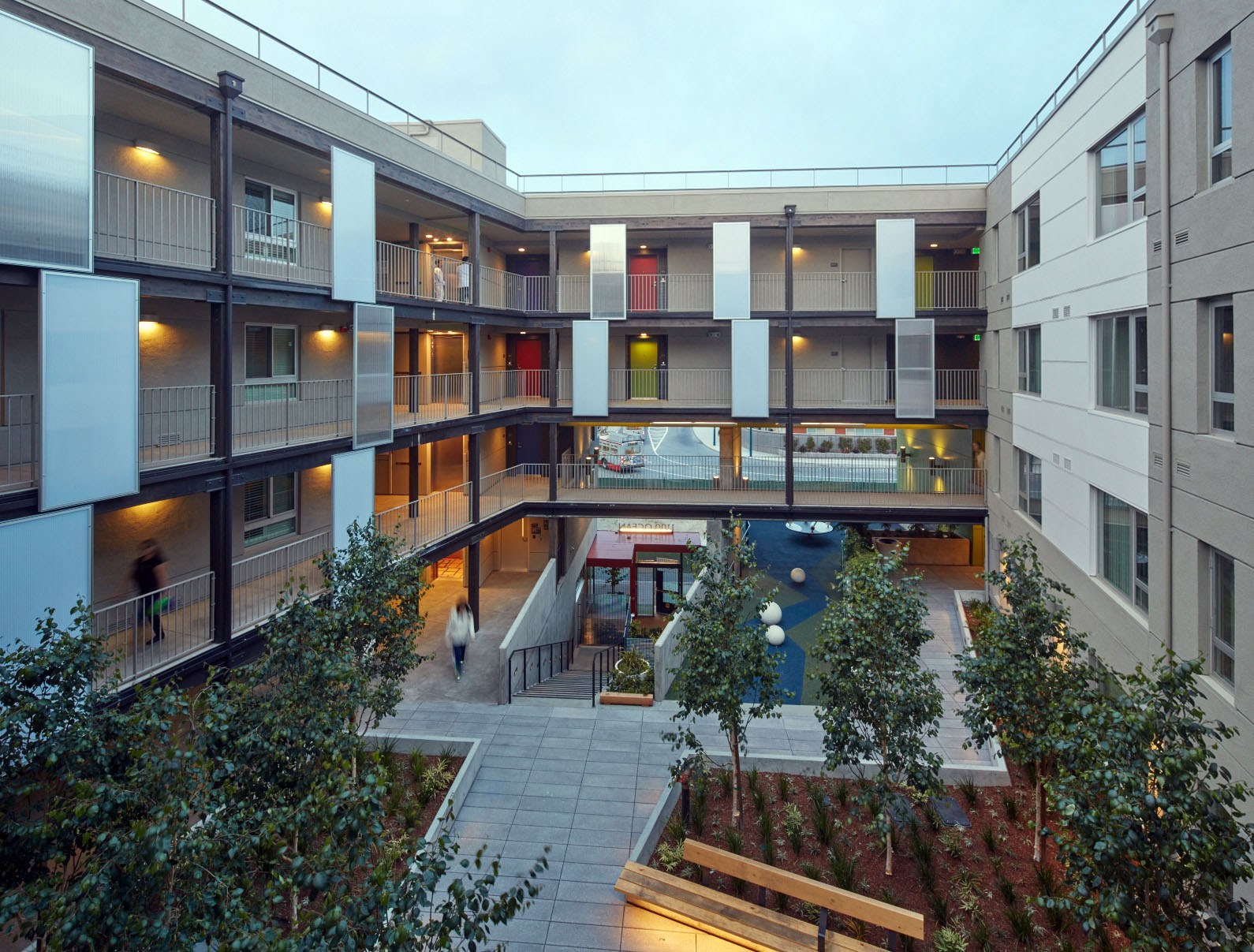 The 1100 Ocean Avenue building includes a community kitchen, common spaces, laundry facilities, and a fitness room. The site also features an outdoor plaza and play area, a storage area for up to 36 bikes, and 5 parking spots, one of which is reserved for a car-sharing vehicle. The ground floor of the building has spaces for commercial tenants, which currently are occupied by two restaurants and a coffee shop. In addition to being within walking distance of the Balboa Park BART station and City College, 1100 Ocean Avenue is adjacent to the Muni light rail and several bus lines, offering residents easy access to San Francisco and the larger Bay Area.

To assist TAY and other residents, Mercy Housing has a resident services coordinator who helps to bring the residents together socially within the development and connect them to the larger Balboa Park area. TAY residents also have access to a case manager through First Place for Youth, the onsite service provider. According to First Place for Youth’s chief operating officer Kathie Jacobson and community youth housing advocate Malka Goodman-Sills, the organization’s strategy for working with the youth is client centered. The TAY services case manager helps the youth set objectives and take steps to meet those objectives, with the overall goal of helping them become self-sufficient and successfully transition to adulthood. The TAY services case manager and other First Place for Youth staff may provide youth with education planning, tutoring, and help with financial aid and scholarship applications as well as career counseling, job search and employment retention strategies, résumé and cover letter assistance, internship placement, and skill building. The TAY services case manager also maintains relationships with offsite case managers and invites specialists from the community to 1100 Ocean Avenue to discuss health, communication, and other topics relevant to the youth. In addition, youth who are experiencing mental illness have access to a separate, specialized case manager.

Development costs for 1100 Ocean Avenue Apartments totaled $32.2 million. Bank of America provided the largest share of the funding in the form of $14.3 million in equity in exchange for 4 percent low-income housing tax credits allocated by the California Tax Credit Allocation Committee. The project received roughly $9.2 million from the city of San Francisco through a loan from the Mayor’s Office of Housing and Community Development and funding from the former San Francisco Redevelopment Agency. California’s Department of Housing and Community Development’s Transit Oriented Development Housing Program and the California Housing Finance Agency’s Mental Health Services Act Housing Program together provided $7.3 million. The Federal Home Loan Bank of San Francisco’s Affordable Housing Program also awarded the project a $700,000 grant. In addition to development funding, the city extended up to $3,745,499 in operational funding for 19 of the units for TAY, which is being used to subsidize the rent for those units over a 15-year period. Through the Mental Health Services Act, the California Housing Finance Agency provides an operating subsidy for the remaining six TAY units.

A Step in the Right Direction

The 1100 Ocean Avenue development is helping area youth transition to adulthood. According to Jacobson and Jennifer Dolin, regional vice president of operations at Mercy Housing California, 1100 Ocean has been successful in addressing the needs of its TAY residents. Jacobson highlights the fact that 100 percent of the youth residents are paying their portion of the rent as a sign of success, because the youth are learning to budget and prioritize expenses. Jacobson and Dolin also note that the development’s turnover rate reflects its success. “We have had some turnover, but some of the turnover has been positive, and there are folks that have maintained their housing while they went back to school or work,” says Dolin. Dolin notes that positive turnover can occur when youth residents find jobs elsewhere or move out as their families grow. In recognition of 1100 Ocean Avenue’s community impact, the project won a 2016 Affordable Housing Finance Readers’ Choice Award in the Urban category.