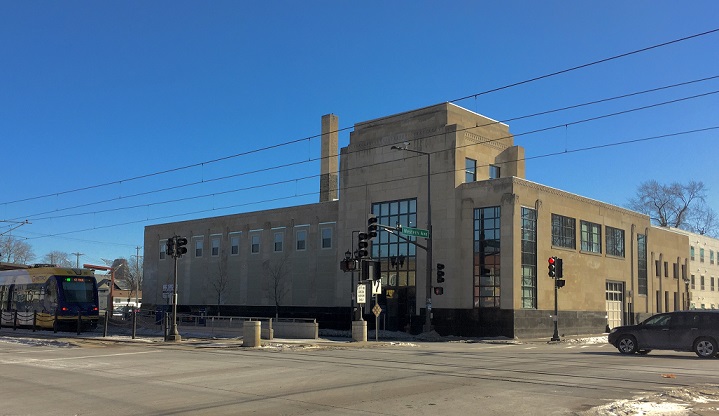 Western U Plaza is an equitable TOD project involving historic preservation of the Old Home Foods building and new construction in the Summit-University neighborhood of Saint Paul. Credit: Kate Speed

In recent years, Minnesota’s Twin Cities have substantially expanded the region’s transportation infrastructure, including the construction of an 11-mile light rail transit system connecting the downtowns of Saint Paul and Minneapolis. The METRO Green Line, a $957 million project completed in summer 2014, adds 18 new stations on University Avenue and at other destinations in the area known as the Central Corridor. Advancing equitable transit-oriented development (TOD) was a core goal of the Metropolitan Council, the regional agency responsible for planning the METRO Green Line. Equitable TOD ensures that the positive outcomes of residential and commercial development surrounding transit stations, including reduced transportation costs, increased access to jobs and community amenities, and improved environmental quality, especially benefit low-income and minority residents. Constructing and preserving affordable housing along new transit corridors ensures equity from TOD. One such example is Western U Plaza, a mixed-use development next to the METRO Green Line’s Western Avenue station in one of Saint Paul’s most diverse but lowest-income neighborhoods.

Western U Plaza is situated approximately a half-mile west of the state capitol in a once-thriving African American area of Saint Paul that declined after freeway construction in the 1960s displaced residents and prosperous local businesses. Located directly across University Avenue from the Western Avenue station, Western U Plaza satisfies a need for equitable TOD that provides affordable housing, commercial spaces for local businesses, and community spaces to build neighborhood identity and deliver social services. Although Western U Plaza reflects longtime community aspirations for development of the site, the Western Avenue station on the METRO Green Line and the coordination of many public, private, and philanthropic partners made the project possible.

A Vision of Equitable TOD along the METRO Green Line

The vision for the Western U Plaza site came into focus after the community successfully petitioned the Metropolitan Council in 2010 to add three stations, including one at Western Avenue. Through a broad coalition known as Stops for Us, the community ensured that the METRO Green Line would better serve the populous and largely minority neighborhoods along University Avenue. With the Western Avenue station secured, the Aurora/St. Anthony Neighborhood Development Corporation (ASANDC), a community development corporation serving the Summit-University, Frogtown, and Aurora/St. Anthony neighborhoods, focused its efforts on the nearby Old Home Foods building, which had been unoccupied since 2006. ASANDC hosted community input sessions about how to develop In 2011 the 1.6-acre site, and in 2011, the decision was made to pursue a mixed-use TOD project. Having never completed a mixed-use project before, ASANDC selected Sand Companies as its development partner in a process that involved community residents and organizations.

The $19 million project, financed in large part by low-income housing tax credits and federal historic tax credits, is being constructed in two phases. Western U Plaza’s first phase, which was fully leased at its completion in December 2015, includes 18 units in the historic Old Home Foods building and 42 units in a new 3-story building. A major marketing effort was directed at families with children in area schools as part of the Saint Paul Promise Neighborhood initiative. All of the 60 housing units, which range from studios to 3-bedroom apartments, are affordable for households earning less than 60 percent of the area median income, and 7 units are reserved for the chronically homeless.

The renovated historic building also contains 3,000 square feet of community space. Nieeta Presley, executive director of ASANDC, envisions displays by local artists and other cultural performances in some of the space. ASANDC and partner organizations will use the rest of the space for job training, financial education, and leadership development for residents of Western U Plaza and the wider community. In addition to these services, the formerly homeless residents of Western U Plaza will benefit from onsite support services coordinated by the Amherst H. Wilder Foundation, a local health and social services organization that leads the Promise Neighborhood effort.

The project’s second phase will be a 2-story mixed-use building facing University Avenue, with 6,600 square feet of commercial space on the ground floor and 8 residential units above (6 market rate and 2 affordable). The second phase is expected to begin sometime in 2016, although the development has already secured four commercial tenants through pre-leasing. Through a Community Economic Development grant from the U.S. Department of Health and Human Services, ASANDC seeks to accommodate local businesses as well as to create 24 jobs for low-income individuals and 8 professional jobs, such as property management positions for the entire building, according to Presley. 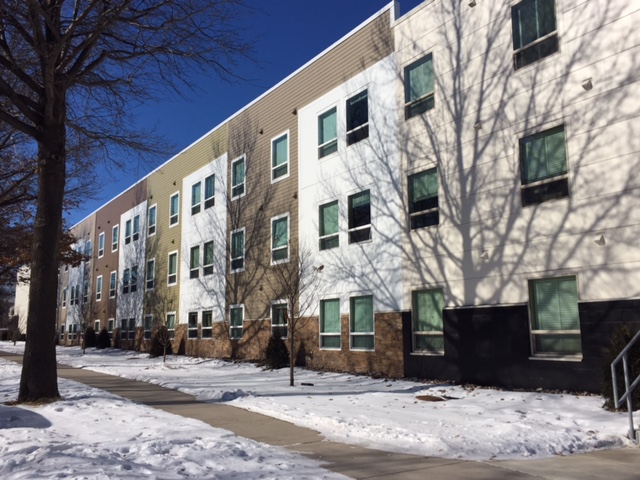 The second phase of Western U Plaza saw the construction of 42 apartments in a new building behind the Old Home Foods building. Credit: Kate Speed

The project benefited from the coordinated planning and funding efforts of a group of local, regional, and national funders known as the Central Corridor Funders Collaborative, a group of local and national organizations that was established to provide funding and helps coordinate the community and government agencies involved in developments along the METRO Green Line. As a part of their work, the collaboration ensured that the equitable TOD that occurred was inclusive and avoided gentrification and displacement insofar as possible. In 2011, this effort evolved into a regional initiative, Corridors of Opportunity, supported by funds from Living Cities and a HUD Sustainable Communities regional planning grant. ASANDC also received substantial predevelopment support from the Twin Cities Local Initiatives Support Corporation (LISC) and its Accelerator project, the Twin Cities Community Land Bank, the Greater Metropolitan Housing Corporation, and other partners. According to Kate Speed, program officer for Twin Cities LISC, Western U Plaza was a model investment opportunity because of the long-term disinvestment in the neighborhood and the project’s potential to spur other equitable TOD.

Tracking the Success of Equitable TOD in the Twin Cities

In addition to providing affordable housing, Western U Plaza has increased access to affordable transportation for transit-dependent people — another benefit of equitable TOD. Presley says that Western U Plaza has been a catalyst for other affordable projects in the surrounding neighborhood and has inspired community development efforts, including building façade restoration and planned paving and street lighting improvements for Western Avenue. To create a strategy to build and preserve affordable housing throughout the METRO Green Line corridor, Twin Cities LISC, along with the cities of Saint Paul and Minneapolis, convened the Big Picture Project. The project set a “base” goal of 2,540 and a “stretch” goal of 4,500 new or preserved affordable housing units by 2020. According to the project’s 2015 progress report, early evidence suggests that the new transit line has increased affordable housing opportunities. From 2011 to 2014, prices for 2,375 newly constructed and preserved housing units within a half-mile of the METRO Green Line were at levels affordable to households earning less than 60 percent of the area median income, and another 1,778 affordable units were seeking financing in 2014.

Interview with Nieeta Presley, 7 January 2016; Affordable Housing Collaboration in Minnesota. 2014. “Western U Plaza: How Community Engagement and Funder Alignment Are Creating Catalytic Transit Oriented Development.” Accessed 1 February 2016; Stops for Us. 2011. “Stops for Us! Organizing for Equity Along the Central Corridor.” Accessed 1 February 2016.

Interview with Nieeta Presley, 7 January 2016; Stops for Us. 2011. “Stops for Us! Organizing for Equity Along the Central Corridor.” Accessed 1 February 2016; Affordable Housing Collaboration in Minnesota. 2014. “Western U Plaza: How Community Engagement and Funder Alignment Are Creating Catalytic Transit Oriented Development.” Accessed 1 February 2016.