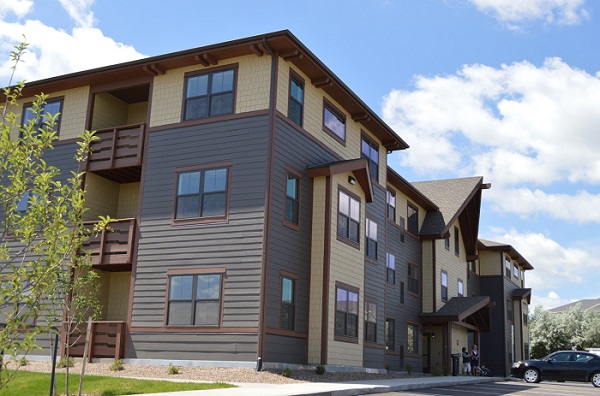 Watford City, North Dakota, the county seat of McKenzie County, stands at the southeastern edge of the Bakken oil fields. Since hydraulic fracturing wells at the nearby Parshall Field sparked a boom in 2006, North Dakota has become one of the largest oil-producing states in the nation, second only to Texas. The growth of energy exploration and extraction in northwestern North Dakota has led to a massive influx of workers and their families; within a decade, Watford City’s population expanded from 3,000 to between 6,500 and 8,000, depending on the month. This rapid growth created a significant shortage of housing and a corresponding increase in prices, which made recruiting employees difficult for local employers. One strategy for providing affordable housing is for local employers to develop new housing; this was the strategy that McKenzie County Healthcare Systems (MCHS) undertook for its essential service workers.

MCHS, which operates a hospital and nursing home in Watford City, has grown to meet the needs of the area. When the county’s swelling population expanded the demand for medical care, the volume of emergency medical services alone increased by 628 percent between 2006 and 2012. As a result, MCHS faced the daunting challenge of attracting and retaining essential service workers, including laboratory technicians, nursing assistants, and other lower-wage personnel.

MCHS experienced the more intractable of the two housing problems plaguing the county during the oil boom. The lesser problem was the need to accommodate short-term workers. Most of the workers immigrating to Watford City are involved in initial oil exploration and production activities, living in the area temporarily before moving on to the next site. The workers’ short stays mean that they usually occupy temporary housing such as motel rooms, man camps, and recreational vehicles. These housing units are relatively easy to provide, and in 2016, a survey by the county’s planning department estimated an existing stock of 10,000 temporary housing units.

The more difficult housing problem arose with the influx of permanent workers filling long-term positions in the energy, construction, telecommunications, and human services sectors. These new workers, who often bring their families with them, typically do not want to live in temporary arrangements. Instead, these new permanent workers must compete with other long-time residents and many short-term workers for the limited supply of conventional housing. In 2010, before a significant supply of temporary housing was added, no unoccupied rental units were available in the entire county. High demand and low supply caused rents to jump by more than 300 percent in less than 10 years, which made housing in the area unaffordable for many, despite increases in both the employment rate and average income. 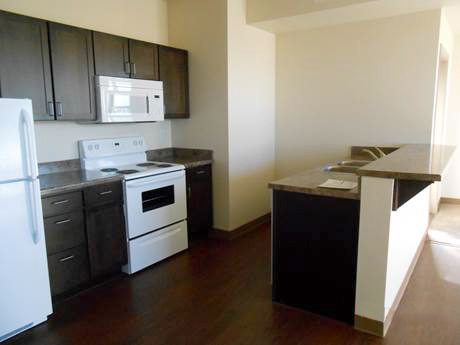 Faced with the prospect of recruiting employees for its planned new hospital in a city without the affordable stock needed to house them, MCHS constructed a $6.3 million, 24-unit apartment building to make recruiting and retaining these essential service workers easier. Completed in July 2015, the 3-story building includes 18 apartments reserved for essential service workers at MCHS or other employers, and the remaining 6 units can be rented to anyone, with preference given to low-income applicants. Rents are determined by the occupant’s income and household size, and are set lower than market rate.

The apartments vary in size: 5 have one bedroom, 16 have two bedrooms, and 3 have three bedrooms; they range from 850 to 1,180 square feet. Although residents are expected to include families with children, MCHS did not provide childcare facilities, which already existed in Wolf Run Village, a nearby employer-assisted housing development.

MCHS donated the site and funded the bulk of the development costs, although the project also benefited from local and state financing. The North Dakota Housing Incentive Fund, which issues tax credits to voluntary contributors and distributes the funds as deferred-payment loans to affordable housing developers, furnished $1.83 million. Watford City contributed $50,000 from a community development fund generated by local sales taxes, and the Bank of North Dakota’s Flex PACE for Affordable Housing program contributed an $830,000 interest buy-down for the project.

At the time they opened, the MCHS development and the other affordable employer-assisted housing projects offered rents several hundred dollars below the market rate for the area. However, when oil prices unexpectedly dropped in 2015, oil field workers began leaving the area. Falling market-rate rents became comparable to the MCHS development’s reduced rents, and as a result, only eight of the development’s units are currently occupied, all by hospital employees. Daniel Kelly, chief executive officer of MCHS, expects more tenants as the price of oil recovers. Construction of the new hospital has entered its second phase, which in the long term, will help address the anticipated increase in demand for housing.