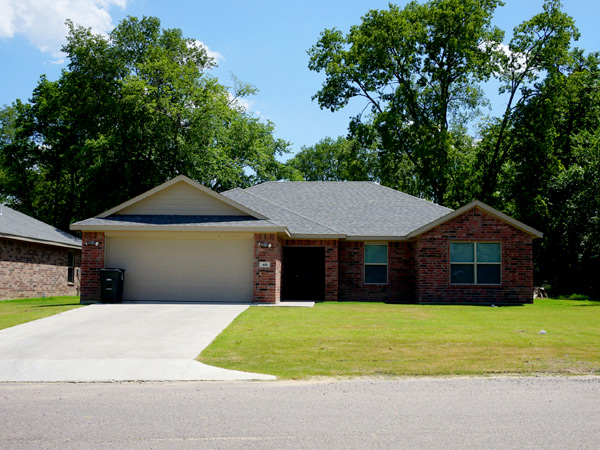 The city of Durant, the county seat of Bryan County, Oklahoma, faces a shortage of affordable housing, particularly for individuals with disabilities who require unique accommodations. Of the households in this rural city with at least one housing problemThe four housing problems listed here are from Bryan County, Oklahoma’s housing needs assessment, which used HUD’s Comprehensive Housing Affordability Strategy data. The housing problems are not the same as the housing-problem criteria used in HUD’s Worst Case Housing Needs reports, which include cost burdens greater than 50 percent of income. Additionally, HUD’s Worst Case Housing Needs reports are based on American Housing Survey data. (incomplete kitchen facilities, incomplete plumbing facilities, overcrowding, or a cost burden greater than 30 percent of household income), 71 percent have a disability, and based on population growth trends, state officials anticipate a demand for 179 additional housing units for low-income persons with disabilities between 2015 and 2020. The 40 units in Chambrooke Homes of Durant help meet this need by providing accessible, affordable housing in single-family detached houses on scattered sites.

Completed in 2015, Chambrooke Homes of Durant was developed by Lance Windel, a single-family homebuilder based in nearby Ardmore, Oklahoma, who also serves as the property manager. The project consists of 8 four-bedroom houses and 32 three-bedroom houses, each with 2 bathrooms. The one-story brick houses range in size from 1,300 to 1,550 square feet and include a two-car garage. Tenants can take advantage of neighborhood amenities such as a playground, basketball court, clubhouse, and outdoor covered seating. The homes were built to high standards of energy efficiency, with features such as programmable thermostats, high R-value insulation, low-emissivity (low-e) glass windows, and ENERGY STAR® appliances and equipment. The houses also have low-flow shower heads and paint with low levels of volatile organic compounds.

A quarter of the Chambrooke houses adhere to Americans with Disabilities Act (ADA) guidelines, and the remaining houses follow universal design principles. All houses have at least one ADA-compliant bathroom with a roll-in shower. A steel safe room built to Federal Emergency Management Agency specifications is mounted inside the garage of each house to protect residents from tornadoes. 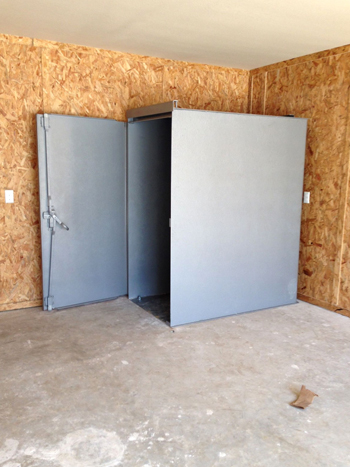 Chambrooke Homes of Durant is the second low-income housing tax credit (LIHTC) project in the state in which all units are dedicated to special needs individuals. To qualify for occupancy, applicants must provide some form of documentation verifying their disability from any entity, such as a medical professional or state agency. Each household must include at least one individual with a mental or physical disability, and tenants are responsible for obtaining supportive services through various providers as needed. Families occupy all the houses; however, the Developmental Disability Services Division of the Oklahoma Department of Human Services may use some houses as group homes in the future if unoccupied units are available. As a group home, a house would accommodate three unrelated individuals with disabilities and one staff person.

Scattered-Site Infill as a Solution to Rural Housing Problems

Durant presents an unusual set of challenges for housing developers. Unlike many rural communities, the city of 17,583 people has seen steady population growth for decades, experiencing an overall increase of 35 percent since 1998. Durant is home to Southeastern Oklahoma State University as well as the headquarters of the Choctaw Nation of Oklahoma, whose territory encompasses 10,613 square miles in southern Oklahoma. The Choctaw Nation also owns the Choctaw Casino Resort in the city, which attracts 3.4 million visitors annually. Despite these economic assets, the city’s median household income of $40,788 is lower than the statewide median income of $47,049, and the city’s poverty rate (23.4%) is significantly higher than that of the state (16.85%). These factors suggest a significant need for new affordable housing in Durant as the population continues to grow.

Durant’s existing housing stock is primarily single-family houses, with almost three-quarters of all housing units predating 1990. Blighted neighborhoods scar many rural communities such as Durant because properties with unclear titles sit vacant, and few public resources are available to spur redevelopment. The developer of Chambrooke Homes decided to develop some of Durant’s vacant properties with single-family houses that match the character of the neighborhood. Because scattered-site infill development takes advantage of existing infrastructure, Windel has found that it can be more cost efficient and faster than developing a subdivision. Neighborhood residents and city officials also appreciate that the infill project has improved conditions in the neighborhood.

The total development cost for this project was approximately $6.5 million. The development received $5.8 million in LIHTC equity from a pool of 14 investors through Midwest Housing Equity Group. The project was also financed by a $740,000 mortgage from Landmark Bank as well as a city waiver of water and sewer tap fees totaling $14,000.

The houses in Chambrooke Homes are eligible for conversion to homeownership. Beginning at the fifth year of occupancy, a portion of the tenant’s monthly rent is set aside as equity. After 15 years, when the LIHTC compliance period ends, the developer will buy out the investors’ equity interest; the tenant may then purchase the house at fair market value from the developer using their accumulated equity for the downpayment. If a current tenant does not wish to purchase or continue renting a house, the developer may sell the house to a buyer who is not a current resident of Chambrooke Homes if they meet the original income and disability requirements.

Chambrooke Homes of Durant has been fully leased since it opened in 2015. The community fully supported the project from the beginning and responded positively once it was complete, as the 40 new homes helped to revitalize the neighborhood and will likely improve property values of neighboring homes. Building on the success of Chambrooke Homes of Durant and his previous projects, Windel plans to use LIHTC along with tax-exempt bond financing to develop 100 more scattered-site properties into single-family houses for low-income families in three other Oklahoma cities.

According to the Housing and Economic Recovery Act of 2008, LIHTC projects designated as rural by the U.S. Office of Management and Budget shall use the greater of the area median income or the national nonmetropolitan median gross income to determine rents; U.S. Department of Housing and Urban Development, Office of Policy Development and Research. n.d. “Income Limits: Frequently Asked Questions,” 5. Accessed 26 June 2017; Interview with Lance Windel, chief executive officer of Lance Windel Construction, 9 June 2017.