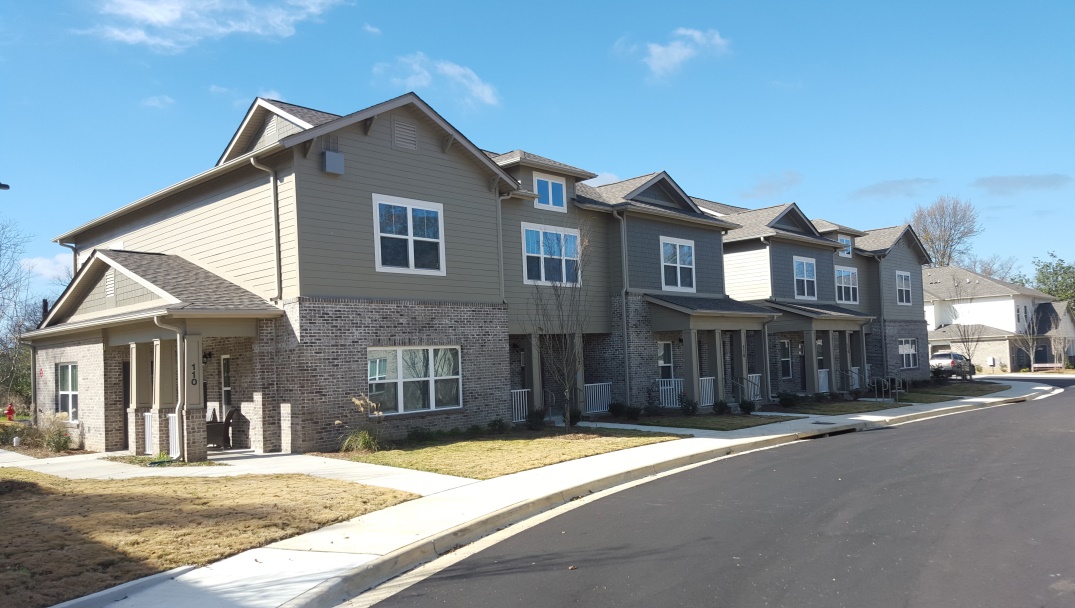 Over the past several decades, Birmingham, Alabama, has experienced substantial outmigration to the suburbs, and the city’s Woodlawn neighborhood has mirrored this trend. Between 2000 and 2010, Woodlawn lost approximately 29.3 percent of its population, and the neighborhood’s poverty rate reached 32.8 percent. These conditions have increased vacancy rates and created a concentration of properties that are dilapidated and/or lack utilities. In 2010, Woodlawn United, a coalition of local nonprofits, partnered with the national nonprofit Purpose Built Communities to engage in poverty reduction through community development. In particular, Woodlawn United seeks holistic community revitalization through improvements in housing, education, and wellness as identified by the community.

The Park at Wood Station

The Park at Wood Station, which opened in spring 2016, provides the neighborhood with desirable new housing. The development contains 28 two-bedroom and 36 three-bedroom townhouses that are affordable for households earning 60 percent or less of the area median income, with rents below $600 per month. More than 1,200 people applied for the units before The Park at Wood Station opened.

The development cost $13.6 million to build, funded in part by $1.1 million in low-income housing tax credits through the Alabama Housing Finance Authority and an $11.4 million equity investment from Regions Bank. In addition, the city of Birmingham contributed HOME Investment Partnerships funds. 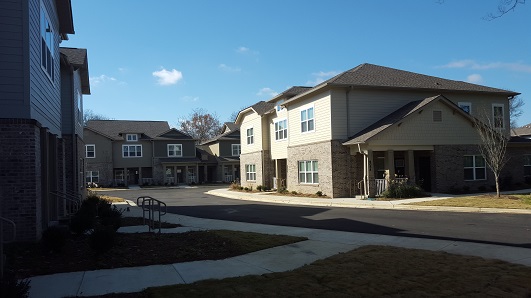 Recognizing that education “leads to a world of unending possibilities,” the Purpose Built model calls for an education pipeline supported by a comprehensive set of services that produces successful students and adults. In 2015, the Woodlawn Foundation helped launch a $7.1 million education program, including an early-education building that is currently under construction. Another major effort has been the foundation’s partnership with Birmingham City Schools to create the Woodlawn Innovation Network (WIN). WIN created a comprehensive curriculum from prekindergarten through high school dedicated to science, technology, engineering, art, and mathematics. In one WIN program, Woodlawn High School students have the opportunity to graduate with up to 60 hours of college credit or an associate’s degree. In 2015, 25 percent of seniors were taking college courses, and the graduation rate was 13 percent higher than in 2013. WIN also includes the Summer Bridge program, in which students in the 9th and 10th grades go to participating colleges and universities to learn more about college life, courses, and opportunities.

The Woodlawn Foundation has assisted several programs in promoting wellness, the third pillar of the community revitalization model. This pillar encompasses community design to promote activity, opportunities for sports and healthy food, and programs for health and wellness. Woodlawn’s efforts include programs with neighborhood schools to promote healthy living for children and families. In a semester at one of the schools, nearly 700 students received vision, dental, and mental health screenings. The local YWCA and other nonprofits have contributed healthcare, fitness, and nutrition planning; 545 residents had been served at the YWCA Woodlawn Family Resource Center as of 2014.

Woodlawn United has received almost $1 million in donations to rehabilitate homes and continue implementing the Purpose Built Community model. Construction has begun on 12 single-family houses for sale to teachers, emergency responders, and other community members.

Woodlawn United’s activities have inspired neighborhood residents to get involved in the neighborhood’s revitalization, opening small businesses, volunteering at the YWCA, and participating in community meetings. Sally Mackin, executive director of the Woodlawn Foundation, has noticed small changes cropping up in the neighborhood. “The owner of the storefront facing our office has started repainting, and we are seeing more people outside, walking dogs and enjoying the neighborhood,” she has commented. Still, the partners see more work to be done, such as continuing to push for education for all, attracting businesses and grocery stores to the neighborhood, and further enhancing Woodlawn’s housing stock.