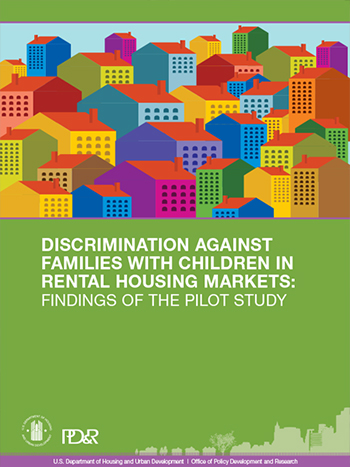 The study, which used 612 matched pairs of rental applicants, collected data from telephone inquiries and in-person visits in three metropolitan areas: Dallas, Texas; Dayton, Ohio; and Los Angeles, California. Variables included race or ethnicity (African American, Hispanic, or non-Hispanic white); the marital status of the household head (single or married); the number, age, and sex of the applicants’ children; and the number of bedrooms (up to three) in a rental unit. In typical paired testing, each matched pair is identical in all respects except for the variable being tested, in order to isolate the reason for disparate treatment. However, in this case, since the variable being tested was the presence of children in the household, the researchers also varied the size of the paired households. If household size had also been identical, then a single mother with two children would have been matched with a household of three childless adults. But, based in part on analysis of American Community Survey and American Housing Survey data, the researchers found that such a comparison did not accurately reflect the characteristics of the households who actually compete for rental units in the market. Instead, the study matched households of differing size, one with children and the other, termed the counterfactual, without children. For example, the counterfactual for a single-parent, female-headed household was a childless single female, with each pair being the same race or ethnicity. For married couples with one or two children, the counterfactual was a childless married couple, each pair of the same race or ethnicity. The tests were structured so that researchers could make comparisons of treatment based on race or ethnicity, family characteristics, marital status, and number of bedrooms.

Researchers found no difference between families with children and childless homeseekers in their ability to make an appointment with rental housing providers, meet with them, and find out about at least one available unit. They found that race and ethnicity did not influence the likelihood of discrimination based on family status, a finding of particular interest given the concern that discrimination against families with children may be a pretext for racial exclusion. Marital status of the rental applicant did not influence the likelihood of reaching an agent, getting an appointment, and being shown a unit. The study did find that families with children were shown fewer units and somewhat larger and thus more expensive units than were childless households. Also, families with one child had a more difficult time learning about the availability of one-bedroom apartments (as opposed to two-bedroom units) than did families without children. The study also found effects of the number of children. Compared with families with one child, prospective renters with two children were shown slightly fewer units and slightly more expensive units. The authors speculate that the application or misinterpretation of local occupancy standards may play a role in these outcomes. Local ordinances cap the number of people permitted per dwelling unit for health and safety reasons, and housing providers may perceive families with children as exceeding appropriate occupancy limits for one-bedroom units. This may result in steering families with children toward larger units. This kind of steering is illegal. Further, the researchers caution that even small amounts of discrimination can contribute to residential segregation, which can have wide-ranging negative effects on families with children, affecting employment, school choice, and emotional well-being.

The study’s authors acknowledge that this research is limited, because it could focus only on the initial stages of inquiry about rental units and was restricted to families who were financially qualified for the requested housing. As a result, the study does not address the extent of unfavorable treatment that families with children might experience at lease signing and during postoccupancy. Moreover, with at least 43 percent of family renters considered cost burdened, the study may not accurately reflect the experiences of a large number of families with children.

A goal of the pilot study was to adapt and apply the paired-testing methodology to family renters. The study confirmed that paired testing can be applied to study discrimination against families, and that the researchers’ partial factorial design allows for investigation of the influence of different factors such as race and marital status on the likelihood of familial discrimination. The researchers also recommend areas for future inquiry. One is the extent of discrimination against families with children in the postoccupancy stage of the rental cycle, as HUD data suggest this is an issue. Another is the role of local residential occupancy standards in restricting the housing options of families with children. A third is the problem of how to investigate the role of financial qualifications in familial status discrimination. Thus far, matched-pair testing has been done only with financially well-qualified testers, but many homeseekers in rental markets have lower incomes. The researchers conclude that there is a need to examine approaches other than paired testing to measure discrimination against families in the rental housing market. Alternative strategies for measuring discrimination and related research topics are discussed further in the report, Future Directions for Research on Discrimination Against Families With Children in Rental Housing Markets.