Examining the Effects of the Rental Assistance Demonstration on Children Living in Public Housing in Fresno, California 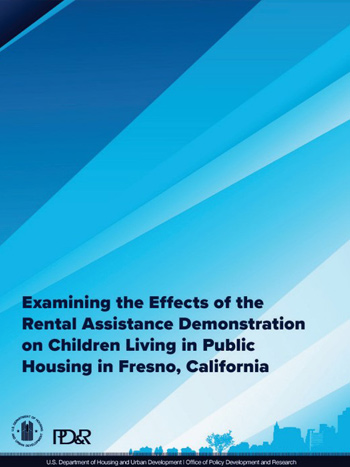 Congress authorized the Rental Assistance Demonstration (RAD) in 2012 to curb the potential loss of public housing as a result of the backlog of unmet capital needs. RAD allows for the conversion of public housing properties to project-based Section 8 contracts. As a result, public housing agencies (PHAs) have more predictable long-term annual funding and can leverage external sources of capital for rehabilitation and financial stability. RAD’s main goals are to improve the physical condition, resident quality of life, and long-term affordability of HUD-assisted housing developments. A recent report, Examining the Effects of the Rental Assistance Demonstration on Children Living in Public Housing in Fresno, California, examines the outcomes and well-being of children living in developments that have undergone rehabilitation and conversion under the RAD program at the Fresno Housing Authority. Beginning in July 2012, the Fresno Housing Authority used low-income housing tax credits to convert and rehabilitate 447 public housing units to Section 8 project-based rental assistance units. The Fresno Housing Authority completed the process in fall 2015 and constructed new community centers with administrative offices, computer labs, and community rooms for resident programs and services. Researchers determined that RAD conversion improved the physical living environment, access to amenities and services, and educational and health outcomes of children. Because they are among the first sites to implement RAD, the Fresno Housing Authority’s converted RAD properties (referred to as FH-RAD) provide a unique opportunity to determine the early effects of RAD on residents’ quality of life, with a special focus on the health and educational outcomes of children. Overall, residents reported that they were satisfied with the way FH-RAD handled their temporary relocation during the renovation, and residents were pleased with the quality of their renovated units.

Using a mixed-methods research design, researchers had four main goals: 1) determine the overall changes resulting from FH-RAD in key housing dimensions such as the physical environment and amenities that promote the well-being of children, 2) examine how RAD impacts the health outcomes of children; 3) understand the strategies FH-RAD used to encourage resident engagement and mitigate any negative effects of RAD; 4) analyze the educational outcomes of children in properties after RAD conversion compared with similar children in other subsidized housing programs.

To accomplish these goals, researchers collected qualitative data in the form of FH-RAD documents and 3 site visits of FH-RAD properties, where they conducted interviews with 23 Fresno Housing Authority staff and 30 heads of household who had children younger than age 10. The purpose of the stakeholder interviews was to understand residents’ involvement in the implementation process, experiences with relocation, sentiments related to the implementation, and opinions on the effect of RAD on children. Researchers compared children in FH-RAD properties with similar children in non-RAD properties. Researchers collected quantitative data in the form of Fresno Housing Authority resident records of 2,851 children from 1,180 households that were part of the public housing program, which included 10 properties that underwent RAD conversion. Of the 2,851 total children, 849 children experienced RAD conversion and 2,002 lived in non-RAD public housing properties. State health records were linked to Fresno Housing Authority resident records, and the number of emergency department visits and hospitalizations in 2012 and 2016 (the respective dates before and after the conversion) proxied for health outcomes. Researchers also linked school records from the Fresno Unified School District to Fresno Housing Authority resident records to determine educational outcomes. Because the RAD sites were not randomly selected, researchers used propensity score matching for the quantitative analysis to minimize potential selection bias.

The researchers determined that this study’s findings on resident satisfaction with the physical environment and access to amenities and services are consistent with the larger RAD evaluation. FH-RAD properties saw significant improvements in the physical environment in four areas: thermal comfort, mold removal, aesthetics and building design, and appliances and layout. Most of those interviewed ― 70 percent, or 21 residents ― were satisfied with the updated air conditioning and heating systems. Residents also noted improved access to new amenities and services, including the addition of onsite property managers to address maintenance and repair needs and the construction of community centers.

The study’s results showed promise for the health and educational outcomes of children. In particular, the researchers found no difference in the likelihood of having one or more visits to the emergency department between children who experienced a RAD conversion and moved back to the rehabilitated units within one year and comparable children in nonconverted public housing. Upon returning to the renovated units, parents reported marked improvement in their children’s health, most notably in the form of reduced asthma symptoms. Children living in the FH-RAD properties after conversion had higher levels of school attendance and grade point averages than did children living in non-RAD public housing developments or participating in the Housing Choice Voucher program. Overall, FH-RAD children had regular school attendance (88%), with only 12 percent showing chronic absenteeism. Researchers found a higher proportion of children with chronic absenteeism among those living in public housing (22%) and participating in the Section 8 voucher program (25%). Nearly half of FH-RAD children in the second grade and above had high grade point averages (defined as 3.0 or higher) compared with 46 percent of those in public housing and 41 percent of those participating in the Housing Choice Voucher program.

FH-RAD required residents to temporarily relocate during the renovation, which resulted in some disruption to residents’ daily lives. Residents with special needs, such as expectant mothers and parents of children with chronic health challenges, reported greater instability during temporary relocation. Despite this disruption, most residents were satisfied with the quality of services they received during temporary relocation. For example, FH-RAD fulfilled transportation needs for parents of school-age children with buses or financial compensation for self-transportation so children could attend the same school during the temporary relocation. Some parents without a car were able to secure temporary housing within walking distance of their children’s school.

To further mitigate disruption, FH-RAD actively sought resident input at multiple resident meetings before, during, and after the renovations. Resident involvement in the decision making process helped fulfill their needs and foster a sense of pride. Meetings held at each property after renovation helped FH-RAD staff measure resident satisfaction with the completed units. FH-RAD encouraged resident attendance at RAD planning meetings by offering childcare, raffles, and refreshments. FH-RAD also conducted workshops to help residents understand how RAD works. These meetings exceeded HUD requirements for resident involvement, which call for such engagement only during the RAD application phase. In addition, FH-RAD staff spoke to residents about onsite employment opportunities. According to a 2014 Fresno Housing Authority report, the Fresno Housing Authority, as part of the HUD Section 3 program, hired 52 residents of RAD sites to complete jobs such as installing solar panels. Several more residents were briefed on Section 3 and received job training during RAD conversion. Although the researchers indicate that future studies will be needed to fully understand its role, Section 3 is a unique opportunity for residents to attain employment onsite.

Because this study was small and used a convenience sample in Fresno, California, the findings are not generalizable to the larger RAD portfolio. The study’s results, however, can help other PHAs develop strategies for implementing RAD. Helping to allay concerns about negative tenant outcomes, the study suggests that children’s academic performance does not suffer during the relocation process. This study determined that households may find attending in-person meetings difficult because of health conditions, family needs, and work commitments. PHAs must create other ways for residents to offer input, such as through one-on-one interviews, surveys, or an open door policy. The researchers also recommend including maintenance staff in the information-sharing process because they are keenly aware of the condition of the properties and units. Updating residents monthly during the renovation is important to keep them informed about the timeline for project completion. Continuing resident engagement after renovations are complete is especially important to gauge satisfaction and instruct residents on how to use and care for new appliances. In addition, PHAs should survey residents about their perceptions of safety as part of the initial needs assessment as well as after RAD conversion to determine whether safety concerns have improved. This study is also relevant to other PHAs that might identify the Fresno Housing Authority’s resident engagement strategies as potential best practices. It offers useful insight into the potential effects of RAD on public housing residents and provides helpful strategies for PHAs and practitioners to consider for improving tenant experiences.

In the Fiscal Year 2020 Appropriations, Congress directed HUD to fund a study on the Impact of RAD on children in assisted households.