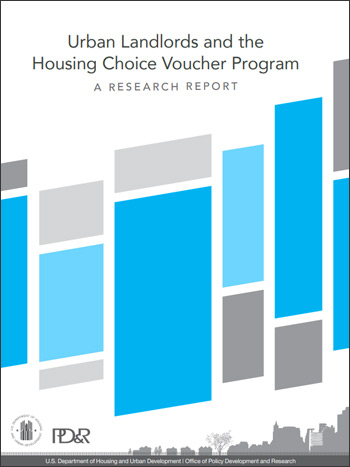 New HUD research explores the role that urban landlords play in shaping housing outcomes among participants in the Housing Choice Voucher (HCV) program. The willingness of landlords to accept vouchers significantly influences the housing opportunities available to program participants. Although one promise of the program is that it could create housing opportunities in neighborhoods with low poverty rates, this outcome is determined in part by a landlord’s willingness to participate. Through interviews with landlords in Baltimore, Dallas, and Cleveland, along with other data sources, this research provides new insight into how landlords in urban markets perceive the HCV program and how this perception affects HCV households’ access to housing choice.

There is an emerging consensus among researchers on the effect of housing and neighborhood quality on life chances, but little research exists on how landlords decide whether to rent to low-income families and, in particular, to households with vouchers. This research is particularly important considering the substantial power that landlords have in selecting tenants, investing in maintenance and repairs, and abating environmental hazards such as lead paint, and thus, in determining the location and quality of housing opportunities available to voucher holders.

To better understand landlord preferences and priorities in selecting tenants, the researchers interviewed 127 landlords and property managers who own or operate rental housing in Baltimore, Cleveland, and Dallas and combined these responses with ethnographic observations of the respondents and key players in the rental market in each city as well as HUD administrative records. The interviews lasted approximately 2 hours and focused on the landlords’ business strategies and their preferences for, and perspectives on, the HCV program. The researchers reported that many landlords enthusiastically participated and were eager to provide policy recommendations. One-third of the interview sample allowed ethnographic researchers to accompany them on their day-to-day business operations.

The research demonstrates a diverse and varied mix of landlords operating in the three cities. Of those interviewed, approximately 40 percent are black, and an additional 13 percent are nonblack minorities. Sixty percent of the landlords are male and 40 percent are female. Small “mom and pop” owners made up one-fifth of the sample, and 40 percent of the sample was composed of owners of moderate portfolios. The remainder of the sample consisted of landlords with large or very large portfolios. Overall, Cleveland and Baltimore had more owner fragmentation, with most of the sample being of moderate or “mom-and-pop” size. The Dallas market was composed of larger owners, which is not surprising considering the number of multifamily properties in the city.

Landlord participation in the HCV program is shaped heavily by the local market contexts. In Baltimore and Cleveland, landlords’ HCV portfolios are small, with 42 and 57 percent, respectively, owning fewer than six units. In Dallas, most HCV rental units are in large multifamily properties. Understanding the incentives and disincentives for landlords to participate in the HCV program is critical to understand how landlords’ decisions can affect program participants’ access to housing.

For many landlords who rent to low-income families, financial incentives are a key motivator for participating in the HCV program. Among the main challenges that arise from renting to poor families are late rental payments, partial payments, and nonpayment of rent, which disrupt cash flow to the business. In addition, a protracted process to collect the rent owed is time consuming and labor intensive for the landlord. Renting to an HCV tenant can substantially mitigate this risk because some or all of the rent payment comes from the voucher administrator. In Baltimore, renting to voucher holders can allow the landlord to capture a rent that exceeds the standard market rent, but this is not true in Cleveland and Dallas. Although approximately 25 percent of landlords in Baltimore report higher rents as a key incentive to participate in the HCV program, 33 percent of Cleveland landlords reported that rents for voucher tenants are lower than those for nonvoucher households.

Among the landlords who participate in the HCV program, the annual inspection (housing quality standard inspection) of units rented by voucher tenants represents one of the major interactions with public housing agencies. Approximately 50 percent of the landlords in both Baltimore and Cleveland described the annual inspection process as burdensome. Landlords in Dallas were less concerned about the inspection, partially because of the city’s newer housing stock. Landlords reported the inconsistency and unpredictability of inspection outcomes as being the primary reasons for their frustration with the process.

Among the 127 landlords interviewed, 37 reported not renting to HCV households. Of these landlords, 68 percent had reported renting to voucher tenants in the past and based their decision not to participate in the program on this previous experience. Generally speaking, landlords cited frustration with the inspection process; overall frustration with the bureaucratic process; and frustration between tenants and landlords, which landlords felt the program made more difficult to resolve, as reasons for their nonparticipation.

Overall, the research provides key insights into the motivations and detractions for landlord participation in the HCV program. Although reliable rental payments are a motivating factor in program participation, working with the local public housing authorities that administer the program can be frustrating and a deterrent to participation.