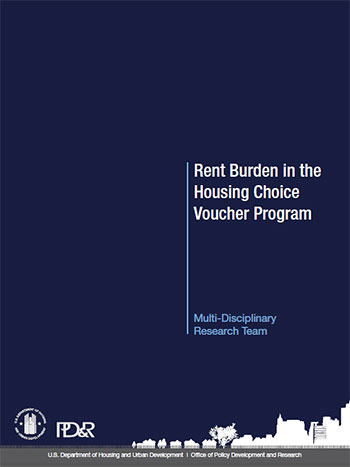 The Department of Housing and Urban Development’s Housing Choice Voucher (HCV) program, administered through local Public Housing Agencies (PHAs), provides housing assistance payments (HAP) to cover the difference between 30 percent of a household’s adjusted gross income and the cost of renting a standard, quality housing unit. Although the program is designed to alleviate participant’s housing cost burden (defined as paying more than 30% of a household’s adjusted gross income toward rent and utilities), in practice, some households exceed the 30 percent housing cost target.

A new report conducted by the Multidisciplinary Research Team (MDRT) for HUD’s Office of Policy Development and Research is the first comprehensive analysis of trends in housing cost burden for HCV households over time. As the nation’s renter households pay ever-larger percentages of income in rent, the report explores how this trend affects renters participating in HUD’s largest tenant-based rental assistance program. The report found an increase in the incidence of housing cost burden among program participants over a 12-year period from 2003 to 2015.

The MDRT researchers in this study used administrative data from HUD’s Public and Indian Housing Information Center to develop a cross-sectional database of households for each year between 2003 and 2015 and a longitudinal database of households who leased up in 2003 and 2008. The data allowed the researchers to explore the duration of housing cost burden as well as characteristics of households experiencing housing cost burden. Households were classified into the following four groups:

The researchers used the data to answer the following questions.

How has the prevalence of housing cost burden changed over time?

What factors increase the odds that an HCV household will experience a housing cost burden?

Are there typical, longitudinal trajectories of housing cost burdens experienced by individual HCV households or clusters of households, and are such trajectories associated with the length of program participation?