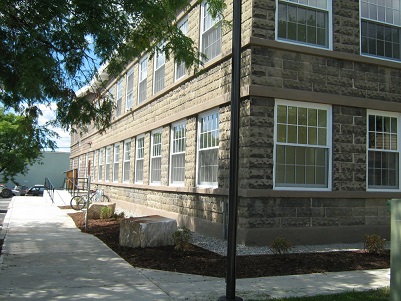 The city of Burlington, Vermont has a great need for affordable housing. Census data indicate that the city’s rental vacancy rate is low, approximately 1.6 percent, and median rents in the city surpass those of the state, although the median household income in the city is lower. In addition, HUD’s consolidated planning data show that, compared with the state as a whole, the city has a higher percentage of households — particularly low-income households — that are cost burdened. Adding pressure to the market, students from the University of Vermont and other area schools compete with residents for existing units. As a result, rents have risen, but little affordable or market rate rental housing development has occurred.

The Bobbin Mill Apartments are located on a 2.9-acre site 3 blocks south of Main Street that is ranked “very walkable” by Walk Score® and is also close to public transportation. One of the buildings is a former manufacturing plant constructed in 1905 for the Vermont Spool and Bobbin Company. In 1982, the building’s previous owners used HUD project-based Section 8 funding and funding from the Vermont Housing Finance Agency (VHFA) to convert the two-story building into 35 apartments and construct a 3-story building with 16 apartments on the site. To preserve the affordable housing, VHFA negotiated an option to buy the buildings if the owners decided to sell the property after the 30-year affordability period. When the owners moved to sell the two buildings, VHFA assigned the option to buy to BHA, the manager of the buildings. 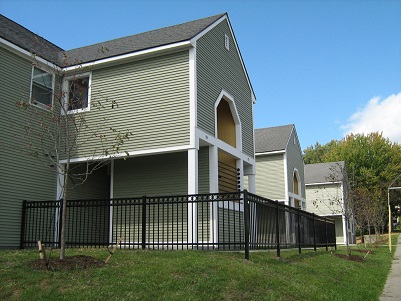 BHA purchased Bobbin Mill Apartments with the assistance of nonprofit syndication and development company Housing Vermont, creating a partnership of two organizations with “complementary skills,” according to Kenn Sassorossi, vice president for partner relations at Housing Vermont. As a syndicator of federal and state low-income housing tax credits, Housing Vermont provided access to funding. In addition to obtaining the right to purchase the properties, BHA was familiar with the residents and the extent of needed renovations.

Under an extended project-based Section 8 contract, all of the apartments — 17 one-bedroom, 23 two-bedroom, and 11 three-bedroom units — will be affordable for another 20 years to individuals earning up to 50 percent of the area median income. The rehabilitation also included energy-efficiency, accessibility, and housing quality improvements. The buildings’ new insulation; windows; and central HVAC (heating, ventilation, and air conditioning) systems are vital to keeping operating costs in check, owing to the high number of heating degree days in Burlington. The units’ finishes and appliances were upgraded, and the buildings were modified to improve accessibility. In addition, the partners constructed a 2,300-square-foot community center on the Bobbin Mill Apartments site.

A Funding Package for Preservation

Permanent financing for the $14 million purchase and rehabilitation of Bobbin Mill Apartments included equity from the sale of federal low-income housing and historic tax credits (table 1). Proceeds from the sale of Vermont’s affordable housing tax credits also contributed to the development’s funding. In addition, loans from the Vermont Housing and Conservation Board and the Burlington Housing Trust Fund supported development.

Bobbin Mill Apartments was fully leased soon after the development opened in January 2015, with most of the original residents returning to the units. Bobbin Mill Apartments has a waiting list, which Sassorossi attributes to the high demand “for newly renovated, assisted apartments close to downtown and the lake.” Wharf Lane Apartments, another affordable housing project of BHA and Housing Vermont that shares Bobbin Mill’s community center, also has a waiting list. By proactively securing the right of purchase for the aging affordable apartments, BHA and Housing Vermont preserved some of the in-demand affordable housing near downtown Burlington. Now that the Bobbin Mills Apartments’ affordable units have been renovated and retained, the city is seeking other partnerships to preserve additional affordable housing near downtown and elsewhere in Burlington.