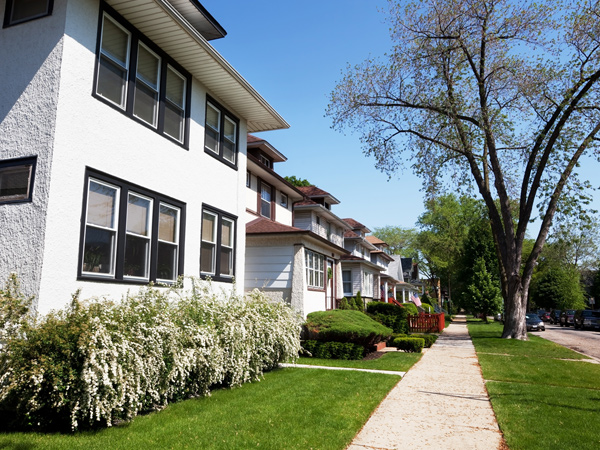 CMAP and NRC created a neighborhood plan for the North River, which includes the neighborhoods of Albany Park (shown), Irving Park, and North Park, Chicago.

Albany Park, Irving Park, and North Park are three neighborhoods located along the banks of the north branch of the Chicago River, about 7 miles northwest of downtown Chicago. These communities have a long history as enclaves for immigrants to Chicago, who found their first foothold in the city in Albany Park and the surrounding area. New workforce housing strategies in the communities were discussed on a panel held at the American Planning Association’s 2019 National Planning Conference in San Francisco, CA. Participants included Thomas Applegate, executive director of the North River Commission (NRC), Brian Daly, senior planner at the Chicago Metropolitan Agency for Planning (CMAP), and Swasti Shah, director of community engagement for the Urban Land Institute Chicago (ULI Chicago).

Planning in the North River Communities

In 2015, CMAP and NRC began working on a neighborhood plan for the three communities, collectively referred to as the North River Communities. Daly recalled that the organizations originally expected the planning process to focus on economic development along commercial corridors and increased access to the Chicago River. However, after engaging with the communities, Daly was struck by how important protecting and supporting housing diversity in the neighborhood was to residents. Residents of the North River Communities feared that the gentrification and displacement they saw in nearby communities would affect their neighborhoods next.

Through their community outreach, CMAP and NRC learned that maintaining diversity within the communities was a goal and point of pride for residents in the area. Historically, the availability of affordable housing has allowed multiple waves of immigrants to settle in Albany Park and the surrounding communities. Applegate argued that the best way to ensure that people from all backgrounds could continue to call the North River Communities home would be to make housing options available for people at all income levels.

A Housing Strategy to Maintain and Create Affordability

To develop strategies to preserve housing affordability, CMAP engaged with ULI Chicago, a district council of the Urban Land Institute, a membership-based organization of experts and practitioners in real estate. Drawing on the expertise of its members, ULI Chicago convened a 2-day workshop in June of 2017 to study the North River Communities and to create strategies to maintain and expand housing affordability.

The North River Communities Neighborhood Plan identified an opportunity to partner with local mission-oriented developers to preserve the communities’ affordable rental housing. The North River Communities contain numerous small two- to four-flat buildings that are not attractive to market-rate developers, who typically prefer collections of 50 units or more. This preference presents an opportunity for mission-oriented developers, who can acquire these buildings without competition from market-rate developers.

Two- to four-flat buildings can also be leveraged to increase the availability of affordable owner-occupied housing. In many of these buildings, the owner will live in one unit and rent out the others for income that can be used to pay the mortgage or to supplement the owner’s income. The city of Chicago offers several assistance programs to help owners either maintain and repair the properties they currently own or fund the downpayment on a new property as long as they meet certain affordability thresholds for the units that they are renting out.

However, Swasti Shah pointed out that these strategies require robust community outreach so affordable housing organizers and developers know when owners are considering selling and which owners need the assistance programs the city offers. NRC maintains a database of homeowners and properties in its service area to track when properties might be entering the market so it can contact property owners early in the process. Applegate reminded the audience that market-rate developers have staff in neighborhoods going door-to-door to gather data on homeowners and that affordable developers who want to compete need to match that level of outreach. Shah and Daly postulated that the long history of NRC in the North River Communities and their ties with community groups and tenant organizers with networks in place provides a unique opportunity for swift action to acquire and preserve affordable housing.

The final piece of the affordable housing puzzle that the panel identified was the need to build new workforce housing. The ULI-Chicago report identified several potential sites for new housing in a neighborhood that had access to transit but were underutilized by their current occupants. In addition, Chicago’s Affordable Requirements Ordinance triggers affordability requirements for developers if certain actions are taken, such as using city-owned land or receiving approval for a zoning change. Under this law, developers have the option to either provide units on the site of their development or contribute to a fund to build them offsite. The plan advocates for those units to be built onsite so that they can enhance the character of the community, especially when they are near transit and aligned with the community’s other transit-oriented development goals.

Since the North River Communities Neighborhood Plan was adopted in late 2018, several affordable housing initiatives have begun in Albany Park. The first is the city of Chicago’s Preservation of Existing Affordable Rental (PEAR) pilot program that includes many of the tools discussed above for preserving the affordability of existing housing. The second is a public-private partnership to preserve 250 units of affordable rental housing has leveraged tax-increment financing (TIF) funds controlled by the local alderman and private capital to acquire units and keep them affordable. Finally, Applegate reported that ground has been broken on a project in the neighborhood called the Oso Apartments that contains 48 units of family housing that is not age restricted; the project has received broad community support as residents have rallied around using all available strategies to preserve the housing affordability that is key to the diversity which had made their community unique.