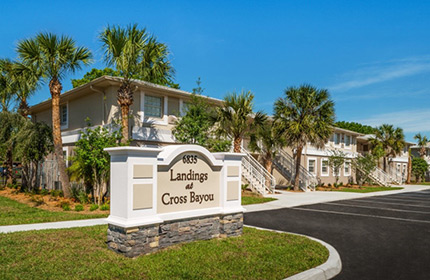 The Landings at Cross Bayou is a 184-unit, 18-building redevelopment located in a neighborhood of multifamily and single-family housing with numerous commercial services and amenities nearby. Credit: Norstar Development USA

The Landings at Cross Bayou is a 184-unit Rental Assistance Demonstration (RAD) program redevelopment of public housing that had become functionally obsolete and deteriorating as a result of inadequate funding. Located near St. Petersburg, Florida, this redevelopment of a Pinellas County Housing Authority property offers an instructive example of how public-private partnerships can effectively leverage the funding opportunities provided by the RAD program for low-income housing redevelopment.

The Landings at Cross Bayou is located in a neighborhood of multifamily and single-family housing. The 9.41-acre site is surrounded by numerous commercial services and amenities, including shopping centers with grocers, major retailers, restaurants, auto repair and sales services, hospital and urgent care services, and an elementary school. Originally named the French Villas, the complex, which consisted of 185 units in 18 buildings, was outdated and deteriorating by the late 2000s after 30 years of service. Most of the apartments, the sidewalks, and the playground did not comply with the Americans with Disabilities Act (ADA). In addition, the site’s stormwater management system needed repairs, and the sewer system repeatedly failed and backed up into units, exacerbating a mold problem that was being caused by plumbing leaks, inadequate insulation, and insufficient air flow in the units. In 2008, the housing authority unsuccessfully applied for funding through the American Recovery and Reinvestment Act (ARRA) to correct these major infrastructure issues. Although the housing authority did obtain ARRA funds to install new windows and handrails throughout the project, the sewer concerns and the water pipe, insulation, and ventilation issues remained unaddressed.

The housing authority formed a partnership with Norstar Development USA, and in 2011, the partnership secured a competitive low-income housing tax credit allocation from the Florida Housing Finance Corporation to renovate the French Villas. At the same time, the partnership seized upon the opportunity offered through the newly implemented RAD program to use private funding to cover the needed infrastructure renovations and ensure that the complex would have ongoing rental assistance.

Construction began in October 2013, and the second and final phase was completed in January 2015. To help ensure a smooth transition for the families being relocated, the housing authority established a relocation office at the site with staff dedicated to relocation assistance. Of the 170 households living in French Villas when the redevelopment began, 121 returned to the completely renovated complex. The other households relocated to different public housing properties or received housing assistance for apartments elsewhere.

Renamed the Landings at Cross Bayou, the 184-unit property includes 64 one-bedroom, 80 two-bedroom, and 40 three-bedroom apartments. All units are now ADA-compliant and have energy-efficient appliances, granite countertops, and ceramic tile floors. Richard Higgins, president of Norstar Development USA, points out a notable improvement, in that each unit has a modern layout in which the kitchen is open to adjacent rooms. 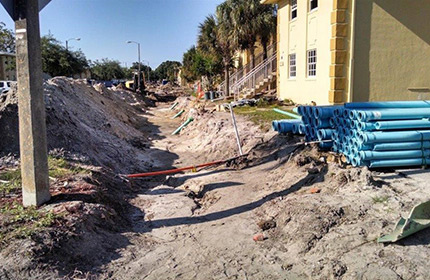 Amenities include a community center with a meeting room, fitness center, full kitchen, library, laundry, and computer lab. The site also includes a youth center, where the Pinellas County Sheriff’s Office conducts its Police Athletic League programming. The entire sanitary sewer system was replaced, as were the water mains and systems, which will reduce operating costs while greatly improving living conditions. In addition, the redevelopment included the site’s first stormwater management system and continuous sidewalks connecting all the units and community buildings.

The development cost of the Landings at Cross Bayou was $24.2 million. The major sources of funding were $16 million in low-income housing tax credit equity and a $2 million loan from Raymond James Corporation, made possible for this redevelopment of public housing property by the RAD program. Other financing included $5.9 million from the housing authority and $300,000 from the county’s HOME Investment Partnerships program.

The housing authority’s inadequate capital improvements budget would have precluded its completing the extensive renovations that were required. Higgins points out that the authority’s experience with partial ARRA funding was typical of the dilemma faced by most public housing agencies. The RAD program enabled the public-private partnership and provided access to private financing available to such a partnership, while also guaranteeing the subsidy required to maintain affordable rents. Because of these financial strengths of the RAD program, the housing authority and Norstar Development could address the full range of issues plaguing the aged French Villas. With upgraded infrastructure and full renovation of the living units, Higgins says, the Landings at Cross Bayou is one of the most successful projects that Norstar has developed. The Landings at Cross Bayou was named a finalist for the 2015 Affordable Housing Finance Reader’s Choice Awards, which further affirmed the development’s high quality.