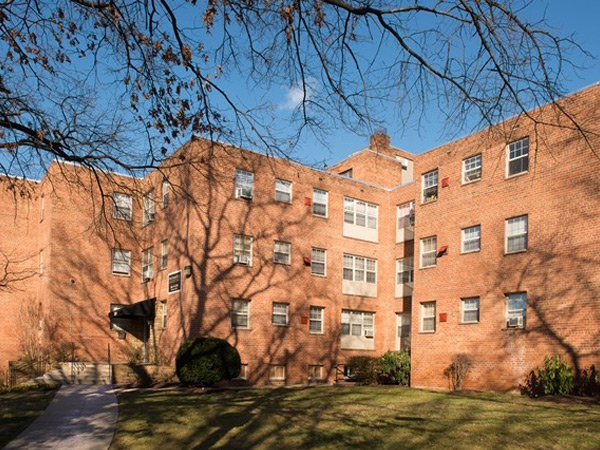 By the time the 59-unit Fort Stevens Place was purchased by the nonprofit Community Preservation and Development Corporation in 2016, the building was more than 50 years old and in need of substantial updates. Credit: CPDC

Constructed in 1952 in the low-density Brightwood neighborhood of Washington, DC, Fort Stevens Place Apartments became affordable housing in the early 2000s. In 2016, when the building’s affordability period under the Low-Income Housing Tax Credit (LIHTC) program was set to expire, the building’s tenant organization exercised its rights under Washington DC’s Tenant Option to Purchase Act (TOPA) and selected the nonprofit Community Preservation and Development Corporation (CPDC) as the new owner. CPDC extensively renovated the aging property, updating the units, modernizing the electrical service, replacing the roof and windows, and adding a new community room. The $18.7 million renovation was completed in November 2017 and preserved 59 units of affordable housing in an increasingly expensive area of DC.

A three-story building on a 1-acre parcel, Fort Stevens Place Apartments towers above the detached single-family homes and brick rowhouses that compose most of the Brightwood neighborhood. Although Brightwood lacks a Metrorail stop or major commercial hub of its own, it is only 5 miles from the capital city’s bustling downtown and about a mile from the Takoma station on Metrorail’s Red Line. A desirable neighborhood with tree-lined streets and a wealth of historic architecture, Brightwood is experiencing rising home prices, with single-family homes selling for $500,000 or more in 2019.

Fort Stevens Place was built as a market-rate property, but it became one of the neighborhood’s relatively few affordable developments in 2001. The 59-unit building consists of 32 one-bedroom units, 25 two-bedroom units, and 2 studio units. A communal laundry room and parking are onsite. In 2016, with the building’s affordability period under LIHTC set to expire, the owner of Fort Stevens Place listed the property for sale. When a building in a desirable neighborhood is sold, the new owner typically raises rents to reflect the area’s higher prices, often displacing existing residents. To help prevent this from happening, TOPA affords residents the right of first refusal, meaning that they may buy their building or assign the right to buy to another entity.

To preserve the building’s affordability, the Fort Stevens Place Tenant Association selected the Community Preservation and Development Corporation (CPDC) to purchase the property. CPDC, a nonprofit real estate developer operating in the District of Columbia, Maryland, and Virginia, owns more than 4,500 units of affordable housing in more than 25 communities. In May 2016, CPDC purchased Fort Stevens Place for $5.6 million, $5.5 of which was contributed by the Site Acquisition Funding Initiative of the city’s Department of Housing and Community Development. With the building secured, CPDC applied for and obtained LIHTC funding and began renovations in 2017.

The yearlong renovation was divided into four phases to allow most of the existing tenants to remain in the building while the work was underway. Because CPDC began holding units — temporarily declining to rent out apartments that became vacant — as soon as LIHTC funding was issued, the developer was able to designate these apartments as “hospitality units,” or temporary homes for residents while their own apartments were being renovated. According to Riane McWain, a real estate development officer for CPDC, an average of 39 units were occupied during the renovation. Eight households were relocated to nearby CPDC-owned accommodations for the duration of the project; seven of these households returned to Fort Stevens Place after renovations were completed, and one moved away. 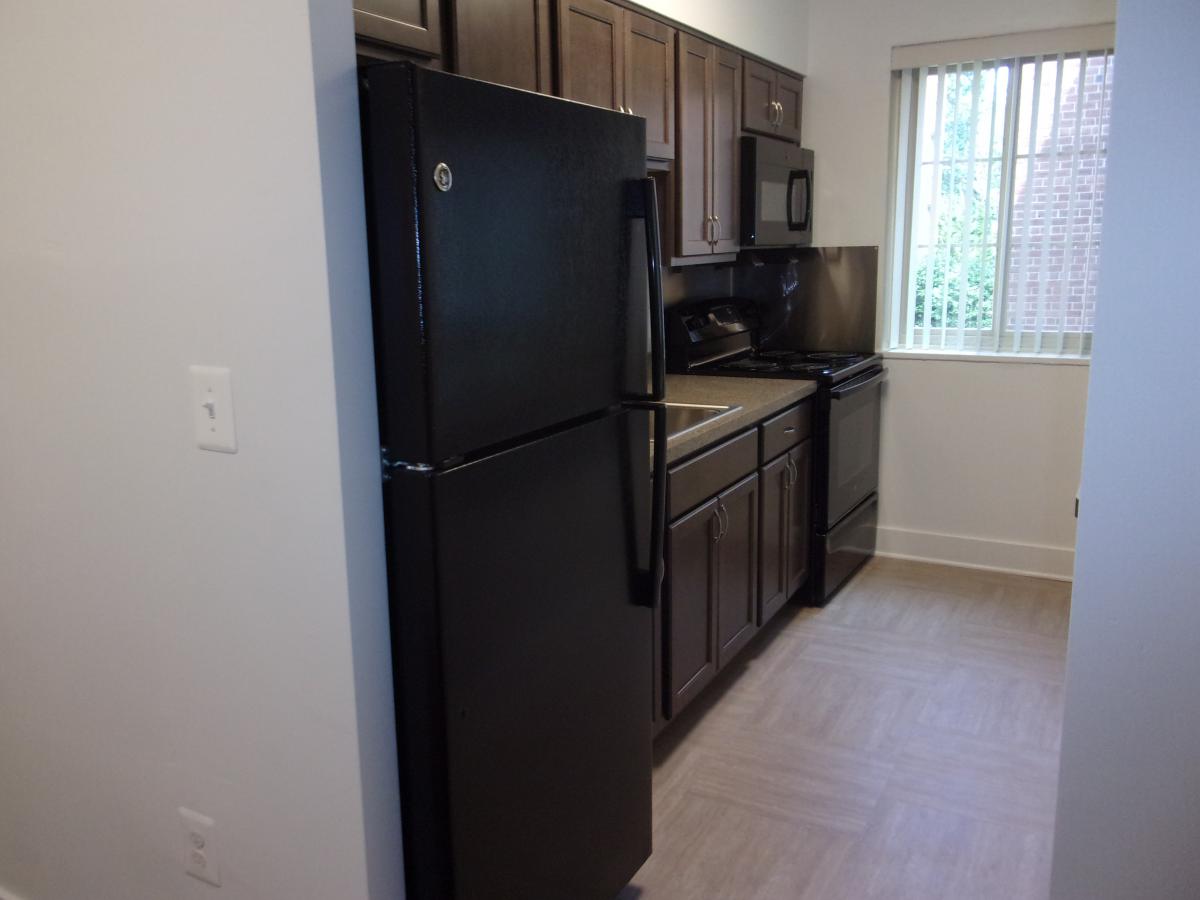 In addition to the substantial building-wide improvements including upgraded electrical service and a new roof, the yearlong renovation replaced the kitchens and bathrooms in each apartment. Credit: Edgewood Management Company

The renovation, which employed Harkins Builders, Inc., as the general contractor and Miner Feinstein Architects as the architect, was extensive. The renovation team replaced the roof, windows, and floors of the building and installed a new sprinkler system. The plumbing and machines in the communal laundry room were replaced, and 3,000 square feet of solar panels were installed on the roof to power the new common areas. In what McWain describes as the most complex element of the renovation, the team worked with the utility company to upgrade the building’s electrical service. The kitchens and bathrooms in each unit were renovated and updated with ENERGY STAR® appliances, and every unit was outfitted with a thermostat to allow residents to control the temperature of their homes directly — a convenience not previously offered. Although the floorplans of most units remained unchanged, three of the first-floor units were modified to be barrier free and accessible to wheelchair users.

Rather than simply improving the site’s existing amenities, CPDC took steps to expand the common areas at Fort Stevens Place. The renovation converted the building’s old boiler room into a community room and added a management suite with a conference room. Previously, the building had no onsite management, and residents had to travel to another building approximately a half-mile away to pay rent or speak with management. The community room, which includes a kitchenette, can be used by tenants, neighbors, and service providers brought in by CPDC’s resident services program, Community Impact Strategies (CIS).

CIS works with residents to bring in programs and organizations that suit their needs and the needs of their neighbors. “We knew going into the project that we wanted to serve the residents [who] lived there and the larger Brightwood neighborhood,” said McWain. “Even during the renovation, CIS staff began forming those relationships with residents.” CIS’ service model focuses on five impact areas: economic development, education, environment, health and wellness, and resident engagement. As of early 2019, the new community room began regularly hosting an afterschool program for children and a program that teaches basic computing skills.

In total, the renovation cost $18.7 million, most of which originated from public sources. Equity from the sale of LIHTC allocations provided $9,602,153, and the city’s Housing Production Trust Fund contributed $3,429,700. CPDC deferred $860,667 of the developer’s fee and took out a $4.8 million mortgage, and the remaining $96,230 came from rental income.

The Impact of Preservation

When affordability requirements expire on a building in an attractive neighborhood, residents are at risk of displacement from rent increases; displacement of existing residents because of rising costs is the major mechanism by which neighborhoods gentrify. When the renovations of Fort Stevens Place were completed in 2018, a quarter of residents had lived in the building for 5 or more years, and the same proportion of residents consisted of seniors who wished to continue aging in place. Because CPDC preserved the 59 income-restricted units, the existing residents were able to remain in their homes and maintain their ties to the Brightwood community. Today, Fort Stevens Place Apartments is fully occupied at rents affordable for low-income households.