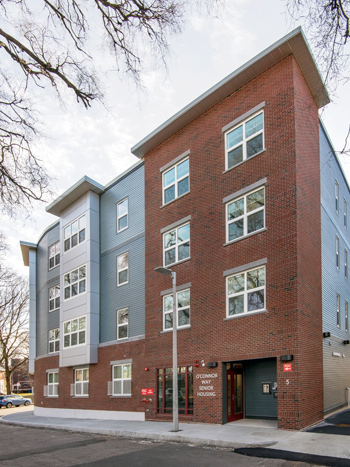 The South Boston neighborhood, located a few miles from downtown Boston, is well known as a working-class area and home to a large community of Irish immigrants and their descendants. The neighborhood also has experienced significant levels of gentrification and displacement over the past two decades. To provide longtime area residents with an affordable housing option in their community, the South Boston Neighborhood Development Corporation (South Boston NDC) opened O’Connor Way in summer 2021, providing 46 one-bedroom apartments affordable to seniors aged 62 and above who earn no more than 60 percent of the area median income (AMI). The project is notable for the way South Boston NDC leveraged existing affordable housing assets, policies, and other local resources to overcome gentrification- and pandemic-related challenges and open O’Connor Way.

A Home for Local Seniors

Of the 46 units at O’Connor Way, 12 units rent to households earning 30 percent of AMI, and 5 of those units are set aside for households experiencing or at risk of experiencing homelessness. Three units are designated as accessible. The building includes a manager’s unit and office, a community room, and shared laundry. 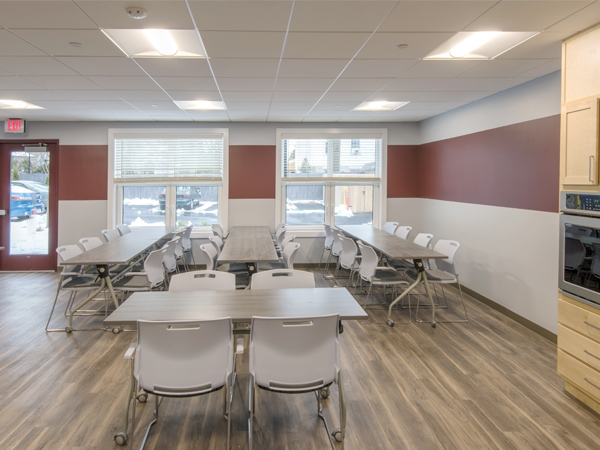 The building’s community room serves as a venue for socializing and for programming. Photo credit: Joel Howe

To aid affordability for residents of O’Connor Way — many of whom, according to South Boston NDC executive director Donna Brown, are longtime South Boston residents — the Boston Housing Authority granted O’Connor Way 22 project-based vouchers, ensuring that recipient households will pay no more than 30 percent of their income toward rent. Brown says that one challenge of operating affordable senior housing is that residents’ incomes tend to decline as they retire, work fewer hours, or spend down their savings. At the same time, says Brown, reducing rent isn’t always an option — especially when the project carries a mortgage, as O’Connor Way does. The vouchers provide stability to both residents and the developer.

O’Connor Way is a product of leveraged local resources and policies. First, it was built on a long-underutilized site at the Mary Ellen McCormack housing development, a massive public housing project consisting of more than 1,000 units spread across 22 three-story buildings that is the oldest public housing development in New England. The Boston Housing Authority, which owns the site, agreed to cleave an underused portion of the site, creating a new parcel that it eventually sold to South Boston NDC for $25,000. Just before building O’Connor Way, South Boston NDC had been trying to acquire a nearby site but had been outcompeted by a private developer, underscoring the challenges to building affordable housing in a dense and gentrifying area and the importance of using existing public resources to expand affordable housing assets. 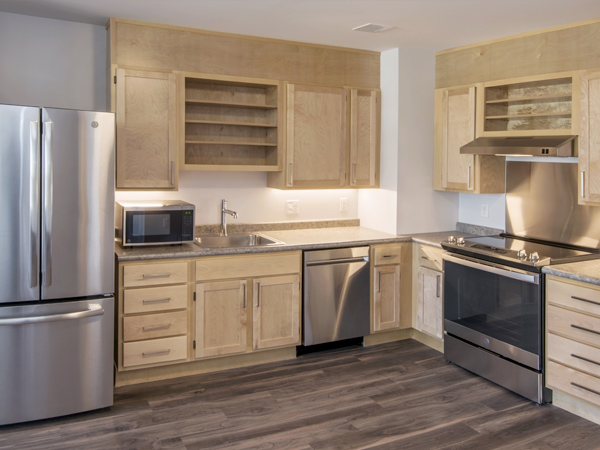 Second, a major source of funding for the $20.8 million O’Connor Way project came from the city’s inclusionary development policy. This policy requires developers of certain market-rate housing to either build affordable units onsite as a percentage of total units, contribute money to an affordable housing fund, or fund offsite units directly. In this case, a nearby luxury condominium development provided funding directly to O’Connor Way, which combined the inclusionary zoning funds with equity generated from the sale of 4 percent low-income housing tax credits, funding from MassDevelopment, a loan from Rockland Trust, and contributions from the TD Charitable Foundation and the Charles H. Farnsworth Trust. Brown reports that this particular use of the inclusionary zoning policy was an optimal outcome for affordable housing advocates in the neighborhood; had the developer exercised the onsite option instead, it would have been obligated to build only 20 units affordable to households earning between 80 and 120 percent of AMI. Those units also would have been located far from likely residents’ familiar neighborhood amenities, such as their markets and churches. In addition, funding offsite units allowed those units to come online faster. The market-rate units are being constructed along the shoreline, requiring complicated sitework that O’Connor Way did not have to contend with.

Finally, leasing during the pandemic proved challenging. The South Boston NDC needed to rely heavily on local social infrastructure to ensure that outreach efforts for the new housing were equitable. Without the ability to hold in-person information sessions and with a digital outreach strategy presenting clear shortcomings for a population less technologically savvy than younger or wealthier cohorts, South Boston NDC doubled down on existing social and institutional connections to reach low-income seniors in the area. For example, signs posted at the construction site gave passersby a phone number to call for information about applying. The South Boston Neighborhood House, a nonprofit serving local seniors that remained in socially distant contact with many throughout the pandemic, helped spread the word about the new housing opportunity. Finally, says Brown, elected officials leveraged their campaign outreach data to help inform the community.

Despite the neighborhood’s rapid changes, South Boston remains a place of community and history. O’Connor Way is building on those resources to keep longtime residents in the neighborhood and connected to their communities.