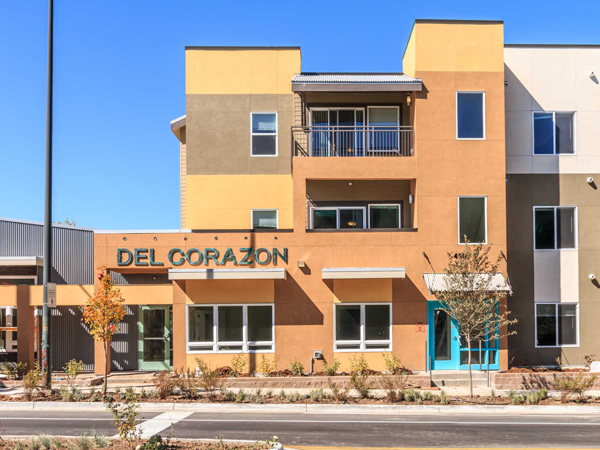 Like many American cities with a thriving technology industry, Denver, Colorado, experienced a surge of economic and population growth during the 2010s. With new housing construction unable to keep up with the increased demand, housing prices in the city rose. As families with greater means sought out housing that fit their budgets, disruptive gentrification unfolded in some of Denver’s working-class neighborhoods. The lower-income Westwood neighborhood, with convenient connections to downtown, embraced a strategy to shepherd, rather than resist, the coming changes to expand opportunities for existing residents. The Del Corazon apartment complex, completed in spring 2018 by developer St. Charles Town Company, was one result of that city-led effort, adding nearly 200 units in the heart of the neighborhood. Along with other efforts to preserve and enhance the cultural, recreational, and economic life of Westwood, Del Corazon is helping the city keep its promise to a once-neglected but vibrant area.

The Westwood neighborhood had long been a working-class area, built up around munitions plants during World War II. Much of the neighborhood’s housing consisted of dense single-family structures alongside numerous mobile home parks. The Del Corazon apartments, consisting of 197 units in 7 three-story buildings, were built on 4.5 acres of 2 of those mobile home sites. The 72 mobile homes at these 2 parks, which housed approximately 250 people, were in such disrepair that the parks were in danger of being shuttered for health and safety violations. Denver’s Office of Economic Development provided a $3.7 million loan to acquire the trailer parks from private owners and fund relocation assistance for park residents. All residents were given relocation compensation, and all were successful in purchasing a new trailer, moving into a rental unit, or purchasing a house. Former park residents were also given preference for units at Del Corazon. In fall 2014, after four years of effort, St. Charles Town Company succeeded in acquiring the sites.

Federal and state low-income housing tax credits along with tax-exempt Private Activity Bonds issued by the Colorado Housing and Finance Agency made up the bulk of the funding package for the $41 million project. Del Corazon consists of one-, two-, and three-bedroom units that rent to individuals and families earning no more than 60 percent of area median income. The project is designed to promote connection between residents and the surrounding neighborhood and features three small plazas; pedestrian paths; and community spaces such as a large shared kitchen, fitness center, computer center, and an exterior barbeque area. Ground-level units have patios, and elevated units have balconies. 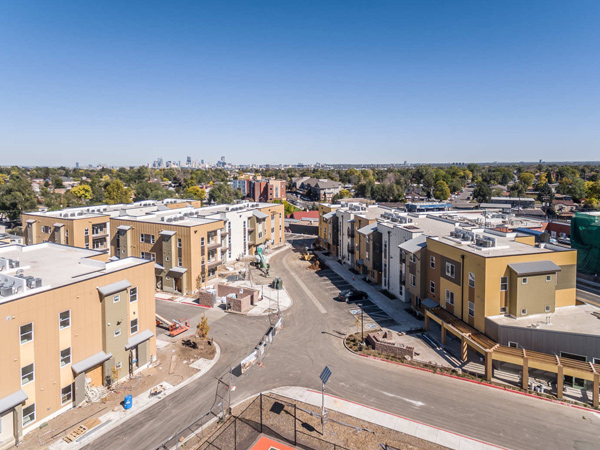 The Del Corazon apartments, completed in 2018, were built on the site of two former mobile home parks and consist of 7 three-story buildings holding a total of 197 units. Credit: Ryan Dravitz Photography

The plan identified opportunities to enhance local parks and create a commercial and cultural corridor to anchor the neighborhood. Del Corazon’s location in the center of Westwood offers residents easy access to area amenities. To further improve the quality and quantity of housing in Westwood, the plan proposed the adoption of zoning rules friendly to accessory dwelling units and advocated for funding for a large-scale home retrofit program to revitalize the area’s aging housing stock. New parks have been built, and playground equipment has been upgraded. Thanks to resident advocacy, public transit connections in the neighborhood have been improved. The city created the Little Saigon Business District to encourage greater neighborhood investment and help organize local small business owners. The group District 3 Arts has built connections between businesses and local artists, resulting in new murals enlivening Westwood’s streets conditions.

Demand for affordable housing in amenity-rich neighborhoods in Denver is high. The city’s surging population, driven by an expanding technology sector, has created a demand for new housing that outstrips the available supply. Through comprehensive planning to preserve and enhance an existing affordable neighborhood, Denver is encouraging more projects like Del Corazon in Westwood. A mile from the Del Corazon apartments, another affordable housing development, built at approximately the same time, saw its 98 apartments fully leased out before opening. When Del Corazon opened its doors, the city had more than 2,500 affordable units in the development pipeline, illustrating the urgent scale of the community’s housing needs.