A True Home Library: Combining Housing With a Public Library on Chicago’s North Side 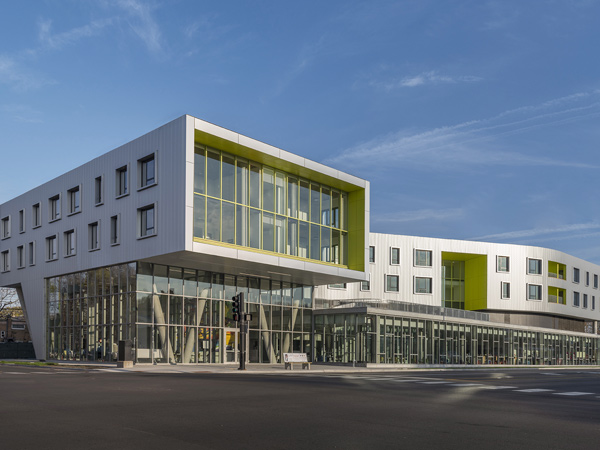 In 2016, the city of Chicago saw an opportunity to not only revitalize the city’s older libraries but also create mixed-use, vibrant public buildings by colocating them with housing. By 2019, Chicago had opened three colocated library and public housing projects across the city. One of these projects was a senior housing project located in West Ridge, a middle-class neighborhood at Chicago’s northern border. The three-story building houses a branch of the Chicago Public Library (CPL) on the first floor and 44 units of independent living senior housing above. The project was built on land acquired by the Chicago Housing Authority (CHA) with the help of an Illinois Affordable Housing Tax Credit that was generated when the housing authority donated the land for affordable housing. The Northtown Library and Apartments serves as an example of how blending housing and public services creates an environment that enriches the lives of both tenants and community residents.

Chicago set out to not only rehabilitate the city’s infrastructure but also construct innovative buildings in its grand architectural tradition. Because it makes more efficient use of land, colocation of housing with libraries presented an opportunity to build housing in neighborhoods where land acquisition might otherwise be cost prohibitive and provide affordable housing in neighborhoods where it was needed.

In addition, placing new libraries in communities with an old or insufficient library infrastructure offered a clear community benefit. This benefit allowed these projects to garner the kind of widespread community support that is often hard for standalone housing projects to achieve. Douglas Smith, managing principal of the Chicago architecture firm Perkins + Will, which designed the project, argues that people have started to see the benefits of mixed-use projects as centers of placemaking and community. By tapping into the vibrancy of combined uses, public buildings can have benefits similar to those of private mixed-use developments while providing a public good. 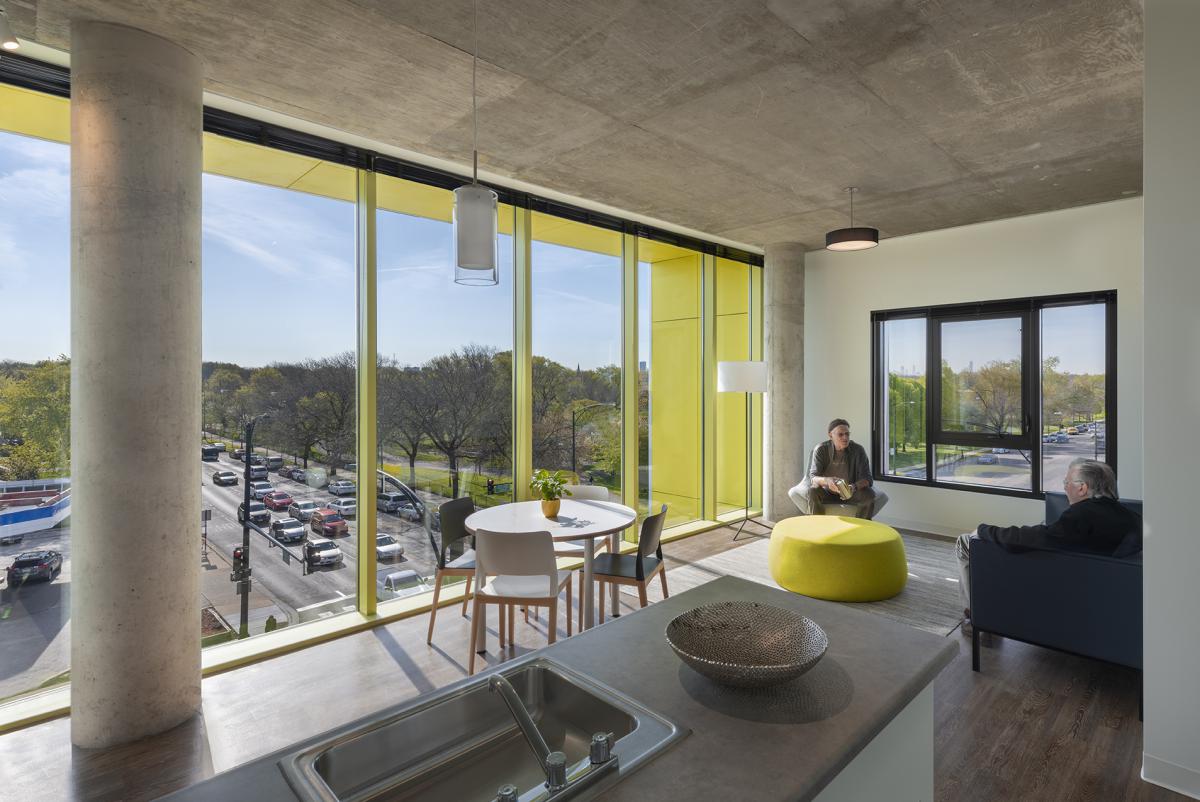 The Northtown Apartments and Library has sweeping views of neighboring Warren Park. Photo by James Steinkamp.

Co-locating public buildings allows each part of the project to do more together than either could do alone. The Northtown Library and Apartments features large meeting and event spaces that often are not feasible in a typical library because of the size constraints of a typical branch library. Because the apartments and the library share community space, the building has a larger public use community space than either building use would typically have alone. This larger space allows the community to host art and music programs to serve not only library patrons and apartment dwellers but also neighborhood residents.

Library as a Service Center

As an independent living facility, the Northtown Library and Apartments development does not have a full-time service provider onsite. However, residents can access the full range of services that the library offers at their doorstep, including a book club for seniors, cultural programming, an Artist in Residence, and intergenerational educational programming.

The library’s services further CPL’s mission to support “lifelong learning.” The programs and amenities serve patrons of all ages and include an early childhood active learning space; a Teacher in the Library program that offers local students free one-on-one homework assistance; and a YOUmedia space for teens to work on digital design, music and recording, and 3D printing with library equipment. Residents also have access to the meeting rooms and spaces at all hours. These spaces are used for community get-togethers and events as well as for hosting community meetings after the library closes.

The three-story building consists of a 16,000-square-foot library on the ground floor topped by a two-story, serpentine residential structure with 44 one-bedroom apartments. The library has an open-air atrium at its center. The rooftop garden, which residents can access by elevator, overlooks this atrium, as do several of the apartments. Through this rooftop space and the atrium below residents can both see and hear activity that spills out from the library while maintaining the privacy of a separate space. These overlapping and integrated spaces reflect the project’s challenge of creating public architecture that also serves as a private home and reinforce the relationship between housing and library as both spaces enliven each another.

A major concern for the architects was how to harmoniously link the low-lying historic bungalows that make up the housing in the neighborhoods to the west of the library with the large commercial corridor where the library site is. The design of the upper stories, set back from the community behind them and not filling the entire envelope of the first floor, reflects sensitivity towards this concern. In addition, the designers envisioned the parking lot serving as a buffer to the project and easing the transition from the neighborhood to the commercial corridor.

Because libraries are shifting away from book storage, the architects were able to reduce the height of the library’s bookshelves and arrange them in an open floor plan. Smith reported that the shorter shelves create a greater sense of community in the library. Rather than having children, teens, and seniors in their own sections separated by walls or tall shelves, these communities each have specific dedicated spaces in the library for their own needs; these spaces, however, are porous and blend into each another. This arrangement furthers CPL’s vision of lifelong learning and creates comfortably intergenerational spaces.

Tenants of the Northtown Library and Apartments must be seniors aged 62 and over. Of the 44 units, 30 are reserved for people currently on the CHA’s waitlist, and 14 are affordable for people earning 60 percent or less of the area median income. Of the CHA units, two are fully accessible for people with disabilities, and five are adaptable to become fully accessible. The building’s amenities include a fitness center, laundry room, and private rooftop garden with views of Warren Park across the street.

The total project cost approximately $34 million and was financed through a combination of low-income housing tax credits (LIHTCs), HOME funds, and CHA’s own capital. Because the project involved both CHA and CPL, one major task was gathering a capital stack that could serve the needs of both agencies and included funding that each agency could access. In the end, $14.3 million of the project’s total funding came from the city of Chicago’s dedicated allocation of 9 percent LIHTCs with another $3 million in HOME funds from the Illinois Housing Development Authority.

In addition to providing $11 million to fund the project, CHA also purchased the land and donated it to the project. Because CHA donated the land to an affordable housing project, the project qualified for an Illinois Affordable Housing Tax Credit, which generated $ 1 million in equity as well as a $3 million seller’s note to finance the land transfer.

David Block, director of development at Evergreen Real Estate Group, the developer who worked on the Northtown Library and Apartments as well as its sibling project in Irving Park, recalled that local alderman Debra Silverstein was instrumental in building community support for the project in the West Ridge neighborhood. The old library that had served the community needed significant improvements. Alderman Silverstein and the members of the community had spent several years advocating for a new neighborhood library. Because of their advocacy, the architects were able to design the project to meet many of the community’s needs. A major addition resulting from community engagement was the addition of 40 units of onsite parking that the library’s original design lacked.

The Northtown Library and Apartments exemplifies the productive possibilities at the intersection of housing and other government services. By placing senior housing on the same property as the library, the city has created a space that can meet multiple community needs in one building. The mission of the library intersects with the needs of residents in senior housing. By being in the same building, seniors can access the resources the library offers more efficiently, and the library can more easily reach its audience. In addition, the city can provide these resources on a single site, reducing the cost of siting each service and allowing policymakers to locate these services in high-cost, high-opportunity neighborhoods.