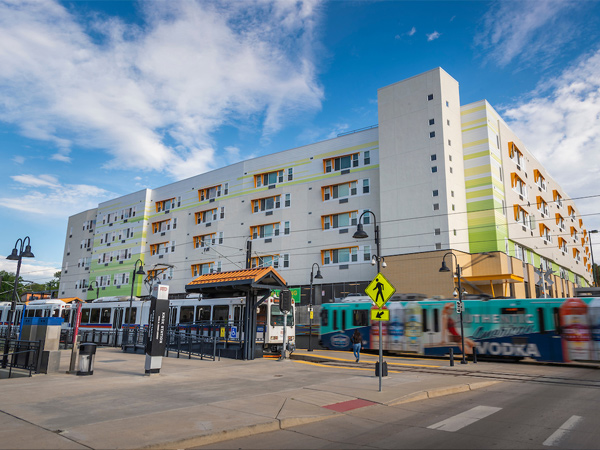 Opened in 2019, Arroyo Village is a $38 million, 130-unit development that combines affordable workforce housing, permanent supportive housing, and a 60-bed homeless shelter on a single property in northwest Denver’s Villa Park neighborhood. Arroyo Village replaced an outdated shelter and an adjacent workforce housing development. Next door to the Denver Regional Transit District’s Knox Station and only 2 blocks from the West Colfax transit corridor, the transit-oriented project offers residents and guests access to the greater Denver area. In 2020, Arroyo Village was among the six winners of the Urban Land Institute’s Jack Kemp Excellence in Affordable and Workforce Housing Award in the large-scale development category.

Two Developers for a Continuum of Housing

Planning for Arroyo Village began in 2014 when personnel from the nonprofit affordable housing provider Rocky Mountain Communities (RMC) approached staff at the Delores Project, a homeless shelter serving women and transgender people of all identities, with the suggestion that their neighboring properties could be put to better use. According to Robin Wood-Mason, director of development and communications for the Delores Project, the shelter at the time operated out of a repurposed recreation center, and RMC’s housing development had just 27 units; only a narrow alley separated the 2 properties. The Delores Project agreed with RMC’s assessment, and in 2017, the two nonprofits formed a partnership, combined their parcels, and broke ground on Arroyo Village.

The first phases of work at the site involved demolishing both buildings and burying the overhead power lines on the property. Beginning in 2016, RMC provided nearly $200,000 in relocation assistance payments to households displaced by the demolition. During the 2 years of construction, the Delores Project rented space in other nonprofits’ facilities to continue offering shelter services. “We joked during that time that we were the ‘homeless’ homeless shelter,” quipped Wood-Mason.

The development’s permanent supportive housing section, called the Delores Apartments, is located on the three floors above the Delores Project shelter, overlooking 13th Avenue. These 35 one-bedroom units are reserved for formerly homeless individuals with annual incomes no greater than 30 percent of AMI. The Denver Housing Authority provides project-based housing choice vouchers for these units, and the Delores Project maintains a food pantry in the lobby of their portion of the building. Wood-Mason explains that, although Denver’s coordinated entry system, OneHome, now manages the Delores Apartments’ waiting list, the Delores Project was able to help place one-third of the development’s first round of tenants; during this initial period, the nonprofit ensured that previous shelter guests were given preference for supportive housing units. Finally, the Delores Project shelter occupies approximately 12,000 square feet on the ground floor of one wing.

RMC is the majority owner of Arroyo Village and functions as its property manager. The Delores Project operates the shelter and offers services to residents living in the Delores Apartments, including case management, individual and group therapy, financial planning assistance, food security assistance, medical transport, and recreational trips. 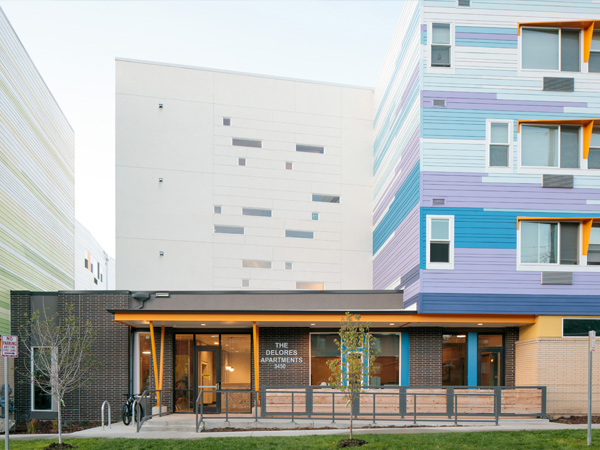 The Delores Project is a housing-focused shelter for unaccompanied adults who are not cisgender men. “Housing-focused” means that the shelter’s goal is not merely to provide a temporary respite from the elements but also to connect guests to permanent or transitional housing. In previous years, guests were eligible to stay for 1 week, but since the onset of the COVID-19 pandemic, the nonprofit has abolished end-date restrictions; anyone who obtains a bed may stay until they obtain other housing. Wood-Mason reports that it takes an average of 1 month for guests to move from the shelter into permanent housing. Guests are required to attend all mandatory life skills trainings, abide by community agreements, and meet with their case manager at least twice per month. After guests find housing, they are eligible for a year of continued case management to help them remain successfully housed.

Wood-Mason reports that the new Delores Project shelter at Arroyo Village is Denver’s first purpose-built homeless shelter since the 1980s. To take advantage of the rare opportunity to design a project suited to the needs and desires of shelter users, the developers and design firm ShopWorks Architecture arranged focus groups of Delores Project shelter guests to determine what they would include in a homeless shelter and incorporated their suggestions into the design. One of the developer’s primary design goals was to minimize the extent to which the space feels institutional. This effort begins with the entryway, where the shelter opens not into a lobby or office but a common space resembling a large living room with sofas, a television, and computers for guest use. Adjacent to the living room is a commercial kitchen — an upgrade from the kitchenette in the old location — and a library maintained by volunteers. The shelter also features a media room that frequently hosts karaoke parties and bingo games as well as an outdoor patio, which is fenced for privacy.

The shelter has 3 dormitories: 2 with 26 beds each and the other, originally intended as overflow housing, with 8 beds. The dormitories and bathrooms reflect many of the focus group’s suggestions, including larger lockers that offer more storage space and an outlet and reading lamp next to each bed that allow guests to read after lights out. The showers also have double stalls to accommodate the desire for a private changing area. Wood-Mason says that one surprising request arising from the resident focus groups involved the location of the front office: between the two large dormitories, with windows to provide line-of-sight between the dorms and the office. “We said, ‘That sounds crazy invasive.’ They said, ‘No, that sounds safe.’ It turned out that guests wanted that level of presence, so that if there was a problem — like if someone was having trouble getting out of bed or if an altercation was starting — staff could respond immediately.

Some design decisions pertaining to the shelter permeate all 134,592 square feet of Arroyo Village, however, including its comfortable color palette of earth tones, the use of natural materials such as bamboo flooring, and its bright exterior colors reminiscent of the quilts that the Delores Project once gave to guests. The building was also designed for energy efficiency and water conservation. The shelter and the housing units are equipped with low-flow fixtures and water-saving appliances as well as ENERGY STAR® appliances. The developers installed high-efficiency windows, and the roof and walls have more insulation than is typical, both of which save energy when heating and cooling the structure. These higher standards arose in part from the developers’ participation in local utility Xcel Energy’s Energy Design Assistance Program, which tracks Arroyo Village’s energy use and suggests improvements to increase energy efficiency. Xcel Energy awarded the project more than $68,000 in incentives for undertaking these improvements. In addition, the developers made the site improvements necessary to install a solar array on the roof in the future.

Cooperation at Every Stage

Arroyo Village is a rare triple asset — affordable workforce housing, permanent supportive housing, and a homeless shelter — made possible not only by the partnership between the Delores Project and RMC at the development level but also by cooperation among many entities, individuals, and components. Even the design focus groups responsible for so much of Arroyo Village’s practical and inspired shelter design exemplified collaboration and trust. Although each resident population at the development has a distinct space — giving rise to the “village” in Arroyo Village’s name — D. Dontae Latson, president and chief executive officer of RMC, reports his hope that the central courtyard’s raised beds eventually will become a focal point where residents gather to participate in community gardening. Arroyo Village is the first development in Colorado to house a full continuum of housing under one roof.