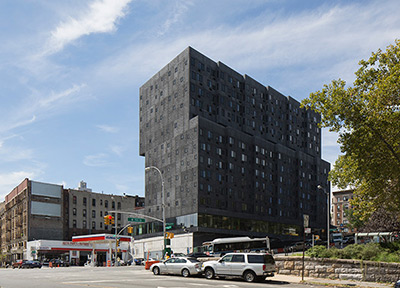 Officials in New York City are grappling with a housing affordability crisis that has been widely discussed in the national press. Between 2000 and 2012, median apartment rents in the city rose by 75 percent, compared with 44 percent nationally. Although this trend has affected neighborhoods throughout the city, residents of Harlem are particularly susceptible to price increases because median household incomes in Harlem are significantly lower than in the rest of Manhattan; more than half of all Harlem renters spend 30 percent or more of their income on rent. In West Harlem’s Sugar Hill district, a high unemployment rate, low levels of educational attainment, and a lack of English proficiency exacerbate residents’ housing problems.

Broadway Housing Communities’ Sugar Hill development opened in late 2014 to house some of the neighborhood’s most vulnerable residents. The development also builds human capital by integrating childcare with education facilities and an art museum celebrating Harlem’s rich cultural heritage. On a former brownfield site in a challenging neighborhood context, the project provides affordable housing as well as a new anchor institution.

Located in the Sugar Hill Historic District, the 13-story building maximizes the allowable floor area ratio while preserving views within the neighborhood. Although considered consistent with the massing, height, and design of nearby mid- and highrise multifamily buildings along West 155th Street, Sugar Hill’s distinctly modern massing, façade materials, and window arrangement distinguish it from much of the district’s rowhouses and apartment buildings, which date mostly from the late nineteenth and early twentieth centuries.

Manhattan Community Board 9, which represents the historic district, has cited reversing the decline of Harlem’s creative and cultural institutions as a major priority. Sugar Hill addresses this need with the Sugar Hill Children’s Museum of Art & Storytelling (SHCMAS) on the building’s first floor. Ellen Baxter, founder and executive director of Broadway Housing Communities, says that incorporating a cultural institution into Sugar Hill to provide a communitywide anchor was intended from the project’s conception. Baxter says neighborhood artists have long sought space to showcase their work, and she expects Sugar Hill to help address this need. Set to open in fall 2015, SHCMAS will feature visual art exhibitions, interactive storytelling series, music and dance performances, film screenings, festivals, and hands-on art workshops, with additional programming focused on early childhood arts and storytelling programming. 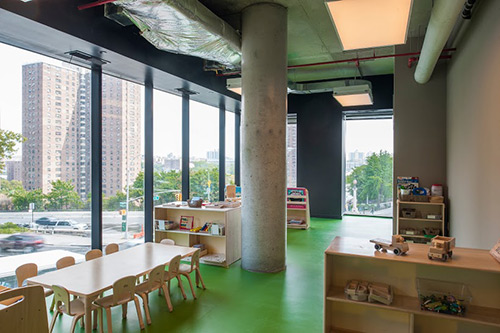 Classrooms for preschool children are incorporated into the Sugar Hill Children's Museum of Art of Storytelling. Credit: Wade Zimmerman


Considering the serious socioeconomic difficulties that many Harlem residents face, Baxter acknowledges that some might consider a cultural institution to be a nonnecessity within an affordable housing development. However, Baxter notes that the private sector will provide a more commercially viable use, such as a grocery, elsewhere in the neighborhood, adding, “For the civic health of our neighborhood, we believed a museum would bring people from distant places to see what’s special about a children’s museum of art and storytelling in a historic neighborhood.” Broadway Housing Communities’ leadership also sees the museum as essential for building the neighborhood’s human capital, setting the groundwork for a broader revitalization, and demonstrating that the arts and affordable housing are entirely compatible.

Manhattan Community Board 9. 2014. “ Statement of Needs (website content has changed and this document is no longer available).” Accessed 27 April 2015; Interview with Ellen Baxter, 30 April 2015.