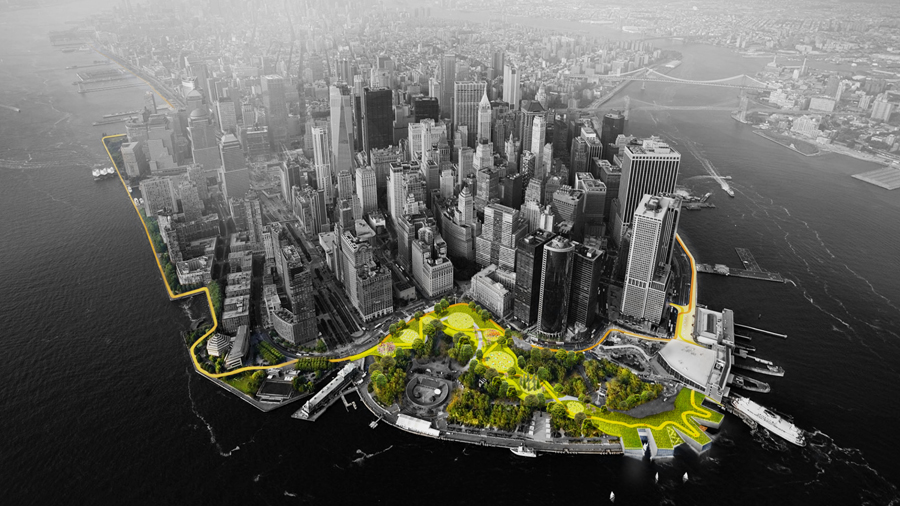 The Big U is a protective system around Manhattan which was awarded funds through Rebuild by Design and the National Disaster Resilience Competition. The Big U will shield the city against floods and storm water while providing green spaces and amenities.

HUD is committed to making itself more friendly to partnerships, both to ensure the most efficient use of critical federal dollars and to help local stakeholders leverage the power of partnerships to create the most meaningful and effective impacts in their communities. Nowhere has that commitment been more evident than in HUD’s work on resilience.

On January 21, 2016, HUD Secretary Julián Castro announced the winners of the National Disaster Resilience Competition (NDRC), which makes nearly $1 billion available to communities that have been affected by natural disasters. Through NDRC, HUD will provide funding for resilient housing and infrastructure projects to 13 states and communities that were impacted by major disasters between 2011 and 2013. Much of what makes HUD’s resilience work successful has been the agency’s focus on partnerships with philanthropies.

When Hurricane Sandy devastated coastal communities in New York, New Jersey, and Connecticut in 2012, President Obama’s Hurricane Sandy Rebuilding Task Force held a series of listening sessions with stakeholders, including philanthropies. Both government and philanthropies realized that the hurricane could serve as a catalyst for rebuilding the region in a more resilient way while delivering innovative solutions that bridge the gap between social and physical vulnerabilities.

In June 2013, the Hurricane Sandy Rebuilding Task Force launched the Rebuild by Design competition, a multistage planning and design competition to promote resilience in the Sandy-affected region. The competition is a public-private partnership that brings together the world’s greatest designers and thinkers to support analysis and design processes. Together with the Rockefeller Foundation as the leading funding partner, the Deutsche Bank Americas Foundation, Hearst Foundation, the JPB Foundation, the Surdna Foundation, and the New Jersey Recovery Fund contributed expertise and resources.

The competition, which awarded $930 million in June 2014 to projects that will transform neighborhoods and cities in the affected region, promoted innovation by developing regionally scalable but locally contextual solutions that increase resilience. The competition also represented a policy innovation because it set aside Community Development Block Grant Disaster Recovery funds specifically to implement the winning projects. Thanks to the commitment of participating philanthropies, the Rebuild by Design competition set new standards for robust community engagement, active collaboration with state and local government partners, and in-depth research.

To help build the permanent capacity of the 67 jurisdictions eligible for NDRC funding, HUD expanded its partnership with the Rockefeller Foundation and launched a National Capacity Building Initiative in summer 2014. Rockefeller teamed with 350 public- and private-sector experts to host nine Resilience Academies around the country. The Resilience Academies were designed to help NDRC entrants strengthen their proposals and ensure that their projects would be successful even if they did not win the competition. These academies offered participants information and technical resources that HUD could not otherwise provide.

Through philanthropic grantmaking and capacity, Rebuild by Design and NDRC represent opportunities for partners at all levels to leverage more than $2 billion for vulnerable communities. They also represent a new kind of public-philanthropic partnership — one that animates the resources of the federal government with the flexibility, creativity, and innovation made possible by philanthropic funding and support.

Ultimately, the ideas generated through Rockefeller’s Resilience Academies and NDRC will be adapted to help build resilience capacity in communities throughout the nation and the world. HUD will continue working with NDRC applicants to ensure that they have the tools to leverage funding opportunities.

These partnerships are about seizing new opportunities. Philanthropic partners offer local communities and HUD a full toolbox of ideas and resources to help them generate the greatest social benefits from their federal funding. NDRC participants, for example, could incorporate philanthropic resources into their projects to meet social impact objectives such as job creation or environmental protection; provide public benefits such as transportation, recreation, or stormwater management; or offer monetized benefits through revenue streams or risk reduction.

These iterative processes will present further opportunities for HUD to learn from the best that the philanthropic and social investment sectors have to offer.