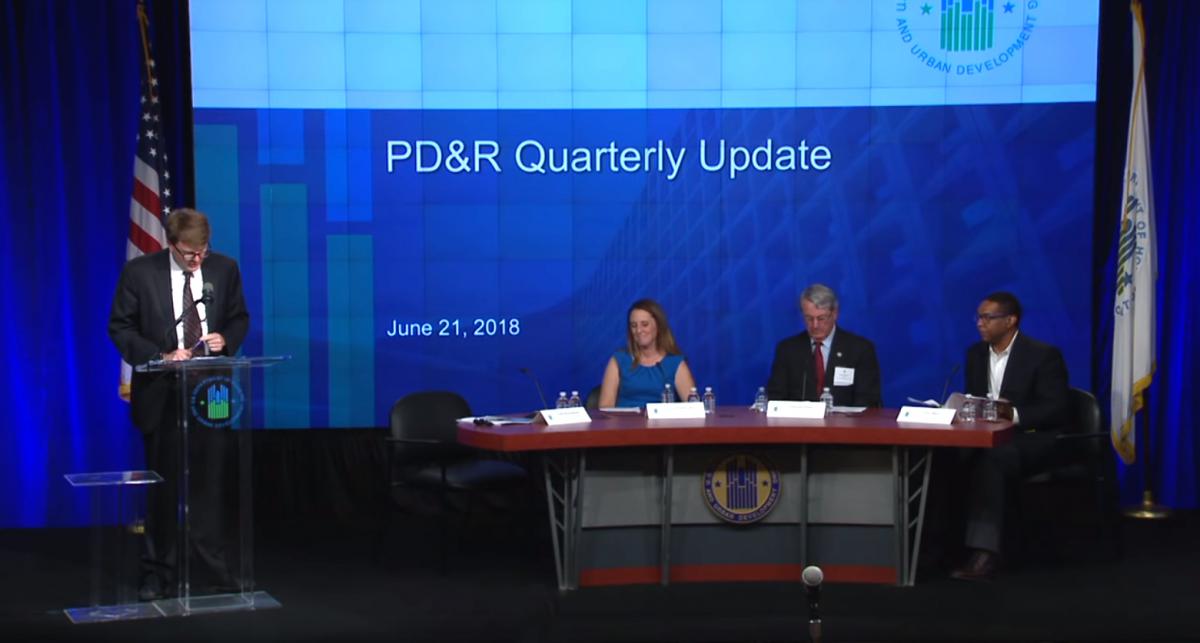 On June 21, 2018, the Office of Policy Development and Research (PD&R) hosted its quarterly update, which focused on regulatory barriers and affordable housing. Montgomery introduced the topic and panelists discussed different avenues local communities, local governments, and developers can take to push back against or reconfigure regulatory barriers. The panel consisted of Lisa Sturtevant, senior visiting fellow for the Urban Land Institute's Terwilliger Center for Housing; Eric Shaw, director of the District of Columbia Office of Planning; and Edward Pinto, codirector of the American Enterprise Institute Center on Housing and Finance and was moderated by Todd Richardson, general deputy assistant secretary for PD&R.

The Problem With Regulatory Barriers

Land use policies and zoning regulations constrain the supply of affordable housing. Density limits, height restrictions, parking requirements, lengthy permitting and approval processes, and community opposition all contribute to increased housing prices. "Overregulation," said Montgomery, "can reduce the profitability of development and can discourage developers." From a local planning agency's perspective, however, regulations must balance the future needs of the community with the present goals of developers, noted Shaw.

Regulatory barriers to housing also reduce overall economic growth. Recent research from Up for Growth found that between 2000 and 2015, 23 states underproduced 7.3 million housing units, or slightly more than 5 percent of the total housing stock in the United States, reported Sturtevant. A lack of affordable housing costs the U.S. economy about $1.4 trillion annually in lost wages and productivity.

Regulations can also make up more than 30 percent of development costs, further driving up housing prices; as Pinto pointed out, "Developers don't pay the cost of construction, tenants do." Pinto believes that the cost of producing new apartments must be brought down to increase the supply of "economical" housing — affordable housing with rents determined by market forces rather than government subsidies. Only about 5 percent of new construction is built as market-rate apartments with moderate rents. Moreover, many workers who earn between $22,000 and $28,000 per year — roughly 40 percent of the workforce — do not qualify for housing subsidies and cannot afford high-rent units, leaving a significant gap in the affordable housing market. For Pinto, the root causes of the problem are building and zoning codes that make it nearly impossible to produce inexpensive housing at "economical" rates.

Although federal policies play an important role in influencing the availability of affordable housing, according to Sturtevant, the supply of affordable housing depends less on federal policies than on local planning practices, policies, and community engagement. Many local planning procedures currently in place enable community opposition that stalls housing production. Reshaping local regulations allows jurisdictions to make a lasting impact on the supply of affordable housing. Shaw and Sturtevant agreed that to make efficient changes at the local level, local jurisdictions should align their various plans — comprehensive plans, transit-oriented development plans, and transportation plans, to name a few — so that the community can have a consistent set of goals. Local jurisdictions can leverage aligned plans with consistent goals to reduce the time and cost of approval processes.

Sturtevant argued that in addition to relaxing zoning and land use regulations, communities can reduce the impact of regulatory barriers on affordable housing in four ways. First, local governments can look for more opportunities to employ "by right" housing development — projects that comply with all regulations and do not require any special exemption, variances, or government hearings. "By right" development allows for the timely completion of projects while also reducing regulatory expenses, thereby reducing development costs and encouraging the construction of less expensive housing. Second, local jurisdictions can modify outdated parking regulations that no longer align with the goals or needs of the community. Many parking requirements were approved decades before for drastically different communities. Third, local jurisdictions can streamline their approval and permitting processes to make it easier for developers to start projects. Finally, Sturtevant suggested that when zoning and land use reforms are not enough to increase the supply of affordable housing, communities can dedicate local financial resources to lowering housing costs. As Shaw stated, the District of Columbia Office of Planning's use of data-driven market analysis improves the city's ability to accurately target resources to meet its present and future needs.

Shaw shared the steps that Washington, DC, has already taken toward implementing regulatory reform. Recent zoning code reviews conducted in 2016 led to reduced parking minimums and updated inclusionary zoning codes that allow the construction of more market-rate units. Such policy reforms offer unique opportunities to address the limited supply of affordable housing and increases in housing prices. In addition to discussing relaxed zoning and land use regulations, panelists offered several additional solutions, including more opportunities for "by right" housing and streamlined review processes, to help communities meet the housing needs of residents across the income spectrum.

For more information on regulatory barriers to affordable housing and strategies to address them, read the spring 2018 issue of Evidence Matters. To find a summary of the national housing market conditions presented at the quarterly update, read the Trending article.