San Emi Apartments in Montclair, California, located between Los Angeles and San Bernardino, is an 18-unit building for people with developmental disabilities earning less than 50 percent of the area median income. Developed by the nonprofit National Community Renaissance of California (CORE) and completed in 2014, San Emi provides residents with onsite social services through United Cerebral Palsy of Los Angeles, Ventura, and Santa Barbara Counties (UCPLA). In addition to serving individuals with developmental disabilities, San Emi contributes to the city’s plans for revitalizing a distressed area of Montclair. The apartments are the fourth affordable housing development by National CORE in a section of Montclair known as the San Antonio Gateway.

Designing for the Disabled

The two-story building is designed to accommodate the special needs of persons with developmental disabilities, which include conditions affecting physical and intellectual development such as autism, cerebral palsy, and epilepsy. Although some residents of San Emi have disabilities that require full-time care, others require much less support. According to Steve PonTell, president and chief executive officer of National CORE, the need to accommodate the developmental challenges of residents inspired the design of San Emi. The building is fully accessible with automatic doors, an elevator, and other fixtures. Each living unit includes a roll-in shower for wheelchairs, tilting mirrors and lower sinks in the bathroom, and an emergency call system.

To encourage residents’ independence, San Emi provides a supportive environment that includes a community room with computers and an outdoor lounge. Another goal, says PonTell, was designing a high-quality building that residents could be proud of and that would encourage improvements in surrounding properties. In addition, the building has been recognized for its sustainable design; it has been certified as an Enterprise Green Community for including such features as energy-efficient windows and water-efficient landscaping.

Potential residents of San Emi go through an assessment process at one of the state’s Department of Developmental Services regional centers, which refers individuals who would benefit from San Emi’s facilities and services. Upon moving in, each resident of San Emi is assigned a UCPLA case manager, who works with the resident to create a personalized set of health, social, and life-skills services and training, known as Supported Living Services. These services, formalized in an individual program plan, are directed at enabling residents to make their own decisions. Tenants can choose, for example, to eat meals in their apartments, the building’s community spaces, or in neighborhood restaurants. According to Ronald Cohen, chief executive officer and president of UCPLA, the organization’s role is to supervise each resident’s “healthy, happy, and safe” transition to independence.

PonTell and Cohen both maintain that the quality of life for San Emi residents comes from the property’s robust social services and quality property management as well as the building’s proximity to three other National CORE properties that provide affordable housing and services for low-income families and seniors. These properties, which are accessible by short pedestrian and vehicular paths, offer a combination of programs and facilities that provide a more complete community and reduce isolation for residents, says PonTell. Not only can San Emi residents attend events hosted at the other National CORE properties, but residents of the other properties can also participate in public meetings of neighborhood organizations and the police department held in San Emi’s community spaces. San Emi residents can use services elsewhere; for example, residents of the senior housing development can help with afterschool programs at a family-serving building. 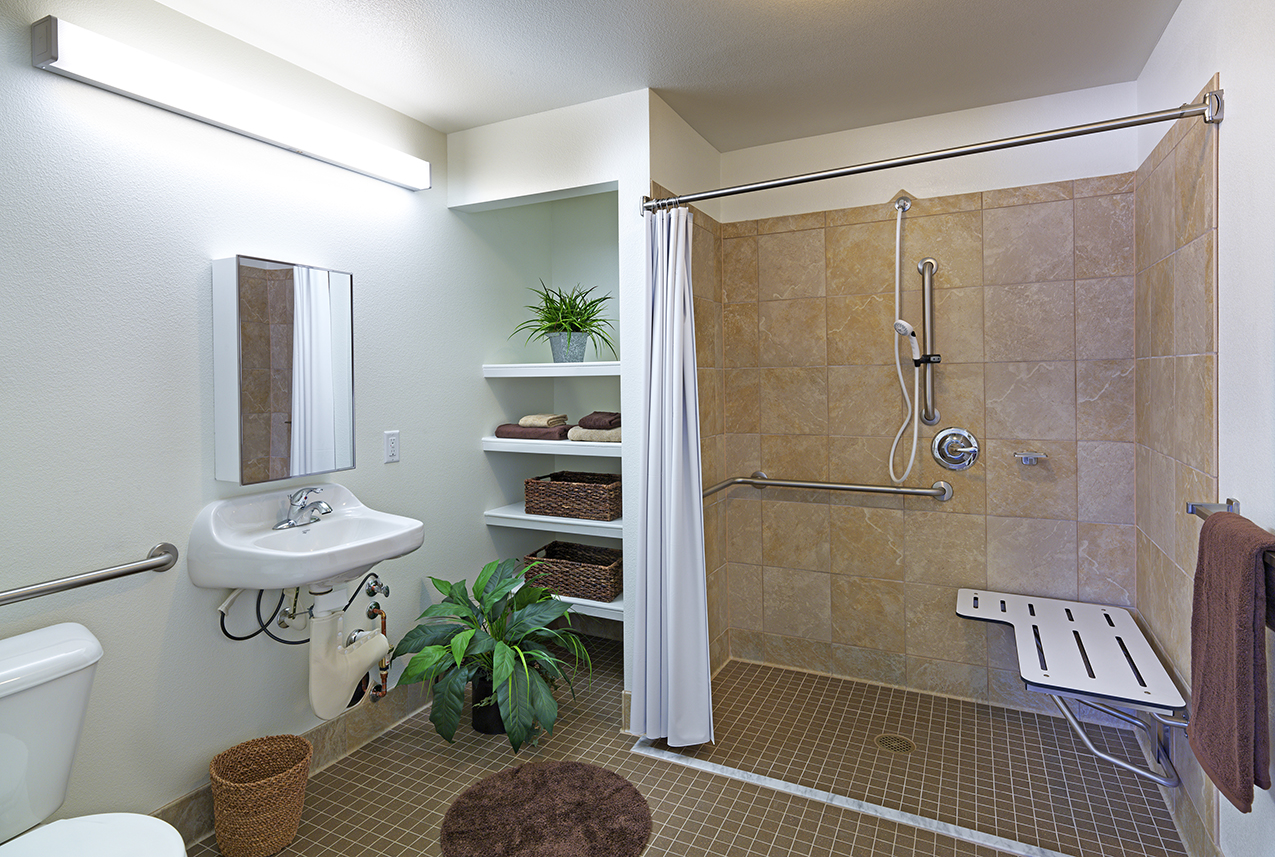 Units at San Emi, designed to meet the functional needs of individuals with disabilities, include features such as bathrooms that accommodate wheelchairs. Credit: Ryan Beck.

Revitalization in the San Antonio Gateway

Between 2007 and 2014, National CORE opened a total of four buildings in the San Antonio Gateway of Montclair, with San Emi being the most recent. The San Antonio Gateway spans a 33-acre area on Holt Boulevard, a major commercial corridor at Montclair’s border with the city of Pomona. It has historically suffered from blight, overcrowding, aging housing stock, and poorly managed multifamily properties. In 2003, Montclair’s Housing Task Force prepared a plan to introduce affordable and market-rate housing in the neighborhood, both to revitalize the area and to help satisfy the city’s affordable housing requirements. Montclair’s redevelopment agency began acquiring properties in the neighborhood and rehabilitating them to set the stage for private investment. Montclair entered into an agreement with National CORE in 2004 to construct 4 affordable housing projects in the San Antonio Gateway that together provide 228 affordable units for specific subpopulations: low-income families, seniors, and people with developmental disabilities.

San Emi Apartments and National CORE’s other projects in the San Antonio Gateway have helped catalyze development and property improvements in the surrounding neighborhood. The affordable housing investments have spurred neighboring property owners to rehabilitate their buildings, says PonTell. Marilyn Staats, Montclair’s deputy city manager, adds that loitering and other public safety concerns have diminished since National CORE’s developments were completed. Some observers also believe National CORE’s projects spurred the development of Bellafina, a market-rate project consisting of 106 single-family houses in the eastern part of the San Antonio Gateway. PonTell says that National CORE is considering additional affordable housing investments in this improving section of Montclair.

San Emi’s $6.7 million development costs were funded primarily by HUD’s Section 811 Supportive Housing for Persons with Disabilities program and low-income housing tax credits from the California Tax Credit Allocation Committee. The remaining financing came from the city of Montclair and the Federal Home Loan Bank of San Francisco’s Affordable Housing Program. The project’s financing was _jeopardized in 2012 when the state of California dissolved all local redevelopment agencies. Montclair and National CORE spent much of the next two years securing the state’s validation of San Emi as a “successor housing asset” and a “committed housing project” of the city’s former redevelopment agency, so that National CORE could proceed with obtaining financing from HUD.

San Emi is a compelling example of affordable housing in a dignified and accessible environment for individuals with developmental disabilities. As one resident said at San Emi’s ribbon-cutting ceremony, “My dream has become my address.” Empowered to pursue independent living with the help of UCPLA case managers and supported by both on- and offsite services, San Emi residents can also engage in the broader community. In addition to improving residents’ quality of life, the San Emi Apartments have also helped revitalize a priority redevelopment area in Montclair.