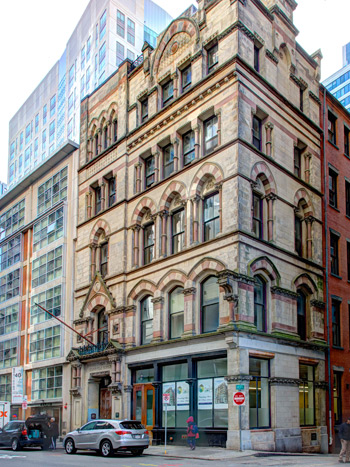 During the past decade, Boston’s downtown core has seen developers focus primarily on luxury housing, but twenty percent of permitted projects in the city are income restricted, helping to maintain some affordable options. However, homelessness continues to be a major problem, due in part because of the city’s high cost of living. City efforts such as Boston’s Way Home — an action plan to end veteran and chronic homelessness — have helped find housing for individuals experiencing homelessness, but additional support is still needed. The Union, located in the heart of downtown Boston, offers 46 units of affordable housing for individuals experiencing homelessness or with low incomes. Originally built in 1875, the historic Gothic structure housed the Boston Young Men’s Christian Union (BYMCU) — an organization dedicated to providing health and wellness programs to the city. In 2016, after several years of declining membership, BYMCU decided to sell the property. At the same time, St. Francis House, a multiservice shelter and affordable housing provider located directly across the street from BYMCU, was looking to expand their operations. Karen LaFrazia, president and chief executive officer of St. Francis House, stated that the limited space in their current building — which includes 56 units of single-room occupancy housing in addition to space for the multiservice shelter — hamstrung the organization’s growth and prevented them from creating new services to meet the city’s emerging needs. Through a partnership with the Planning Office for Urban Affairs, a nonprofit affordable housing developer, St. Francis House purchased the BYMCU building. Along with the 46 units of housing, the rehabilitated Union houses more office space for St. Francis House and a retail store that will include an employment training program with paid internships for individuals experiencing homelessness.

St. Francis House and the Planning Office for Urban Affairs began renovating the Union in January 2018. Because of the building’s age, the renovation began with extensive interior and exterior remediation of lead paint. The developers then converted the building’s office space into 38 studio and 8 one-bedroom units. To maintain the building’s historic character, certain architectural features, such as Corinthian columns, were incorporated into the modern unit designs. Twenty-six of the apartments are reserved for individuals experiencing homelessness or earning less than 30 percent of the area median income (AMI). The Union received more than 1,200 applications for the remaining 20 units, which are reserved for individuals earning up to 60 percent of AMI, and by March 2019, the building was fully leased.

News of the project and its mission to expand affordable housing in Boston quickly spread, gaining support from city officials, the governor, and neighborhood residents. According to LaFrazia, support for the Union grew after Bob’s Discount Furniture donated the furnishings for all the units for individuals experiencing homelessness. In addition, local businesses and churches donated fixtures, bedding, and new home starter kits that include kitchenware. This outpouring of public support highlights the Union’s mission of being not just housing but also a project that unites the broader community.

Primary funding for the Union came from the Bank of America in the form of a $16 million construction loan and $9.25 million in tax credit equity. Because of its historic status, the project qualified for $3.2 million in state historic tax credits. Additional funding of $5.6 million from the city of Boston and $4 million from the commonwealth of Massachusetts made up the next-largest donations. A permanent loan of $750,000 from Eastern Bank and a $500,000 loan from the Federal Home Loan Bank of Boston rounded out the remaining funding. 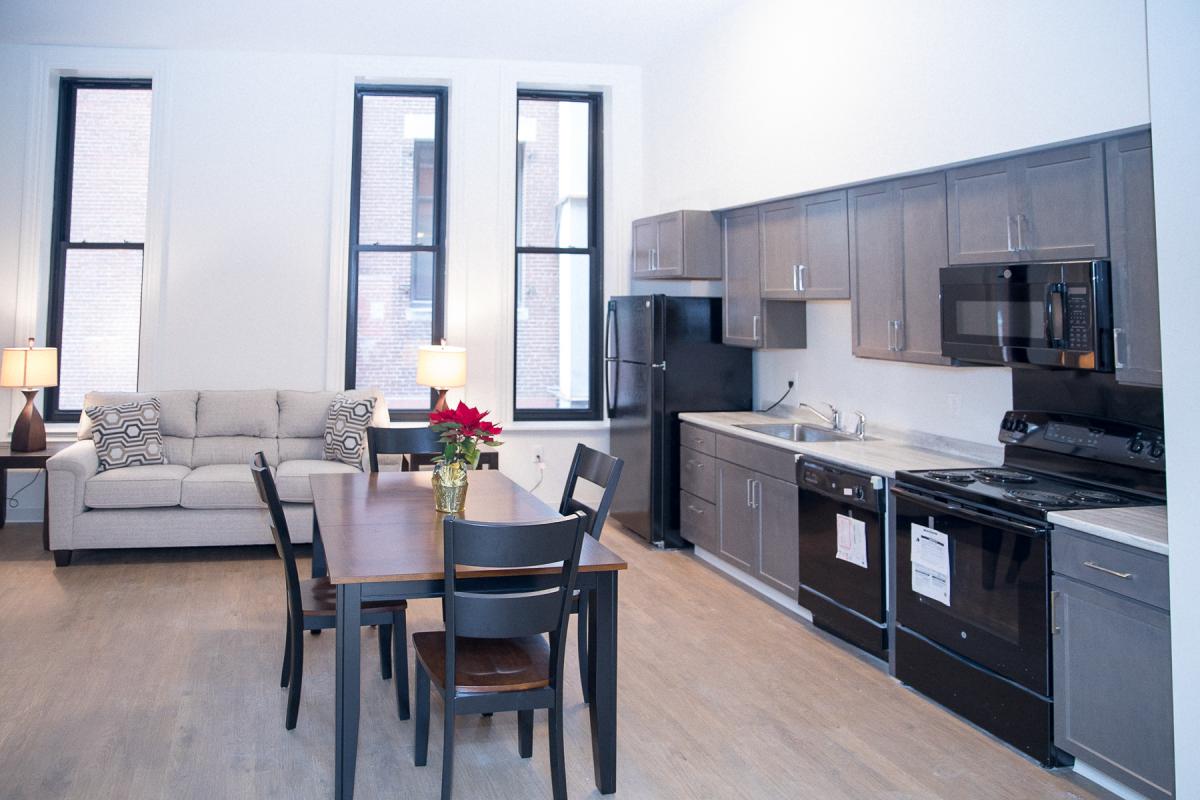 After its founding in 1984, St. Francis House rapidly grew from a breadline into a multiservice shelter. The organization’s mission is to offer adults experiencing homelessness stability through holistic and integrated services. St. Francis House’s services include case management; mental health counseling; employment services; medical aid provided through a partnership with the Boston Health Care for the Homeless Program; and access to food, toiletries, phones, and computers. On average, the nonprofit serves nearly 500 individuals per day and helped approximately 6,500 unique persons last year. Although most of these services are offered at St. Francis House’s original headquarters and not within the Union, all Union residents can access the full catalog of services depending on their needs.

The Union’s rehabilitation included the renovation of an existing basketball court into new offices for St. Francis House. As LaFrazia noted, St. Francis House’s primary headquarters had limited space, preventing the organization from expanding the services it could offer. With the acquisition of the Union, however, St. Francis House was able to move 25 administrative offices. The move freed up an entire floor of the original building, which was turned into a peer-based recovery support center for individuals in recovery from substance abuse.

St. Francis House also introduced a new employment training program at the Union. Through a partnership with a local owner of a dog grooming business, St. Francis House turned the Union’s retail space into its own boutique dog day care and supplies shop. The shop offers individuals experiencing homelessness a 6-month paid internship with on-the-job training. The goal of this program, said LaFrazia, is to give individuals the tools and experience needed to obtain permanent jobs in the pet industry. The store will open in summer 2019, and the internship program will launch in September.

St. Francis House and the Planning Office for Urban Affairs are not finished with the Union yet. According to LaFrazia, the partners plan on developing a 19-story tower with 126 units of mixed-income housing on an 8,500-square-foot lot where an addition to the Union once stood. The mixed-income housing will include 50 units for individuals earning less than 30 percent of AMI or individuals experiencing homelessness. An additional group of units will be reserved for individuals earning less than 60 percent of AMI, and the final batch of units will be for moderate-income individuals and market-rate housing. As with current residents of the Union, residents will have access to all the services offered by St. Francis House.