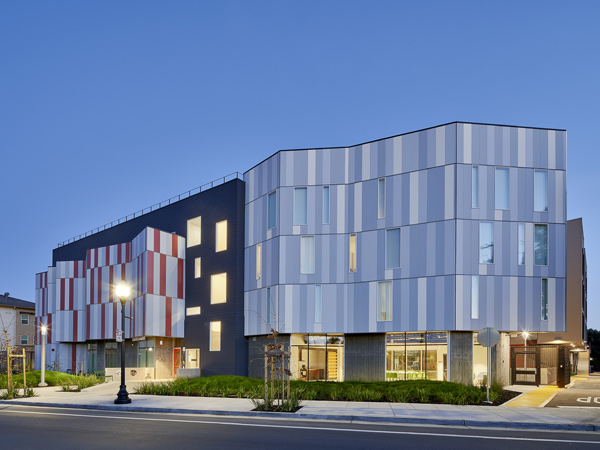 Edwina Benner Plaza, named in honor of the first woman to serve as mayor of a California town, adds 66 units of affordable housing to the city of Sunnyvale, in Silicon Valley. Credit: Keith Baker

Edwina Benner Plaza, located in Sunnyvale, California, is providing much-needed affordable housing while advancing sustainability-minded design. A combination of on and offsite renewable energy sources are meeting all of the building’s electricity needs and work with other design elements to achieve net-zero operating emissions. Edwina Benner Plaza is also notable for its efforts to address another urgent issue in California: housing for individuals and families with a history of, or at risk for, experiencing homelessness.

Bringing Affordability to the Heart of the Technology Sector

Edwina Benner Plaza, developed by MidPen Housing, consists of 30 one-bedroom, 18 two-bedroom, and 18 three-bedroom apartments as well as amenities such as a community room with kitchen, computer lab, fitness center, children’s playground, and secured bike parking. Funding for the $44 million development came primarily from equity generated from the sale of 9 percent low-income housing tax credits. Additional funding sources included the city of Sunnyvale; Santa Clara County, where Sunnyvale is located; and HUD’s HOME Investment Partnerships Program. To qualify, residents must earn no more than 60 percent of the area median income, and preference for most of the units is given to people living or working in Sunnyvale. Property income funds onsite programming, such as youth afterschool and summer programs, financial literacy courses, vocational training, health and wellness programs, computer assistance, and help accessing other local resources and services, that is available to all residents. 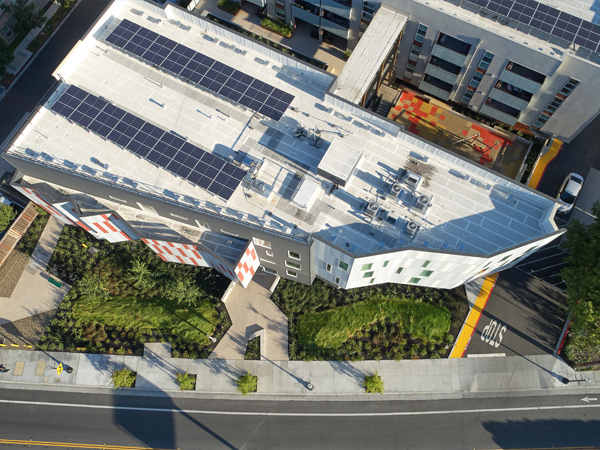 Sustainability played a major role in the design of Edwina Benner Plaza, including the landscaping and the photovoltaic panels that provide half of the building’s electricity needs. Credit: Bruce Damonte

In addition to providing affordable workforce housing, Edwina Benner Plaza is helping to address homelessness in the heart of Silicon Valley. The area’s high cost of housing has been an ongoing and severe challenge, and decreases in housing affordability correlate with an increased risk of homelessness. This finding is borne out in Santa Clara County, where, at the time Edwina Benner Plaza opened, an estimated 7,500 men, women, and children experienced homelessness on any given night. The development, supported by project-based vouchers, reserves 13 units for formerly homeless households referred by the county’s Office of Supportive Housing and 10 units for families at risk of homelessness. Peninsula Healthcare Connection provides additional supportive services and case management for formerly homeless residents. Edwina Benner Plaza is MidPen Housing’s second project in Sunnyvale that targets residents who are currently homeless or at risk of homelessness; the developer opened the nearby Onizuka Crossing Apartments in 2016. Half of the 58 units at Onizuka Crossing are reserved for formerly homeless individuals. 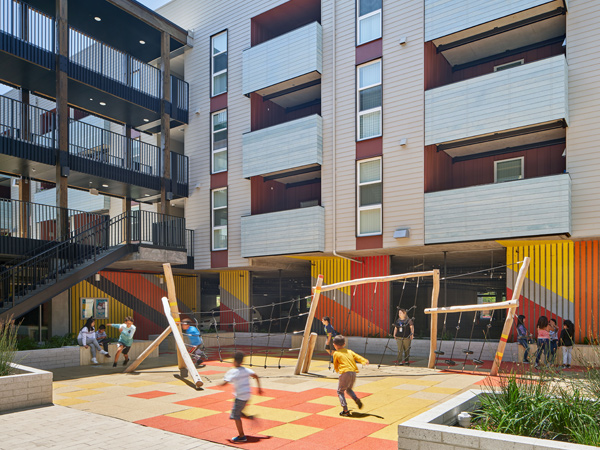 The use of bold colors helps activate the shared courtyard space, encouraging active use of the communal amenities, such as the children’s play area. Credit: Bruce Damonte

Edwina Benner Plaza’s designer, David Baker Architects, sought to ensure that the development would support not only the well-being of the environment but also the well-being of residents. As a result, the development’s layout pushes service and storage spaces toward the side of the building fronting a highway. This arrangement shields the living spaces of the building from noise, enhancing the enjoyment and use of private balconies and the shared outdoor space. To further enhance the appeal of being active in the building’s courtyard play area, landscape architect Fletcher Studio used bold colors and patterns to make the confined space feel more expansive and create visual dynamism.

Edwina Benner Plaza’s name honors the first woman to serve as mayor of a California town. During her 28 years on the Sunnyvale City Council, Edwina Benner, who began her working life in a cannery, held the mayoral office twice, from 1924 to 1926 and again from 1938 to 1940. Nearly a century later, her life and impact are being honored through a series of memorial plaques donated by the Sunnyvale Historical Society. Lewis reports that the success of Edwina Benner Plaza demonstrates to other developers the feasibility of all-electric affordable housing projects and is influencing MidPen Housing’s ongoing and planned projects.